And the games continue. Recent days have left me working on the rest of the plumbing of the cooling system.
The Skunk2 manifold coolant port doesn't leave enough room for the clamp-
So instead of finding a narrow worm style clamp, I simply did a little custom work to allow for the needed space.

I also decided to do the cleanest swap of the manifold as I could- Which left me with the mess of cooling hoses, brackets, and wiring harness. This all fit great with the B18C1 swapped in this little EJ chassis, but looked silly with out the factory intake manifold covering it all up. So I got to work.
I swapped out the cooling pipe and the thermostat housing, under the manifold, to a 99 Civic Si style. This allowed me to put things together as if it were all 'factory'. A little cleaning of the casting was necessary on the thermostat housing before install to ensure good flow.

And yes I am also making a new wiring harness from another 97 Civic EX. But that is another story for another camp fire....

Handled the finishing touches- She's up and running well.
It would be a very long post if I noted all the small things that I did during this recent work. It was nice to make another wiring harness from scratch. They are such a pain in the ass lol. But it turned out well, and I'm happy with the results.
Note: When swapping a B into a EJ chassis, and using a factory D series wiring harness- The crank sensor on the B engine uses 2 wires, instead of the D series crank sensor which uses a 3 pin connector. Its common knowledge on how to remedy this- how ever I decided to ground the "shielding" wire that was the 'extra' 3rd wire. Just so I don't have a 'unconnected' wire hanging around. I grounded it on the Alternator bracket as shown in the photo.

Here are some left over photos of the process...

And here is the finished product. 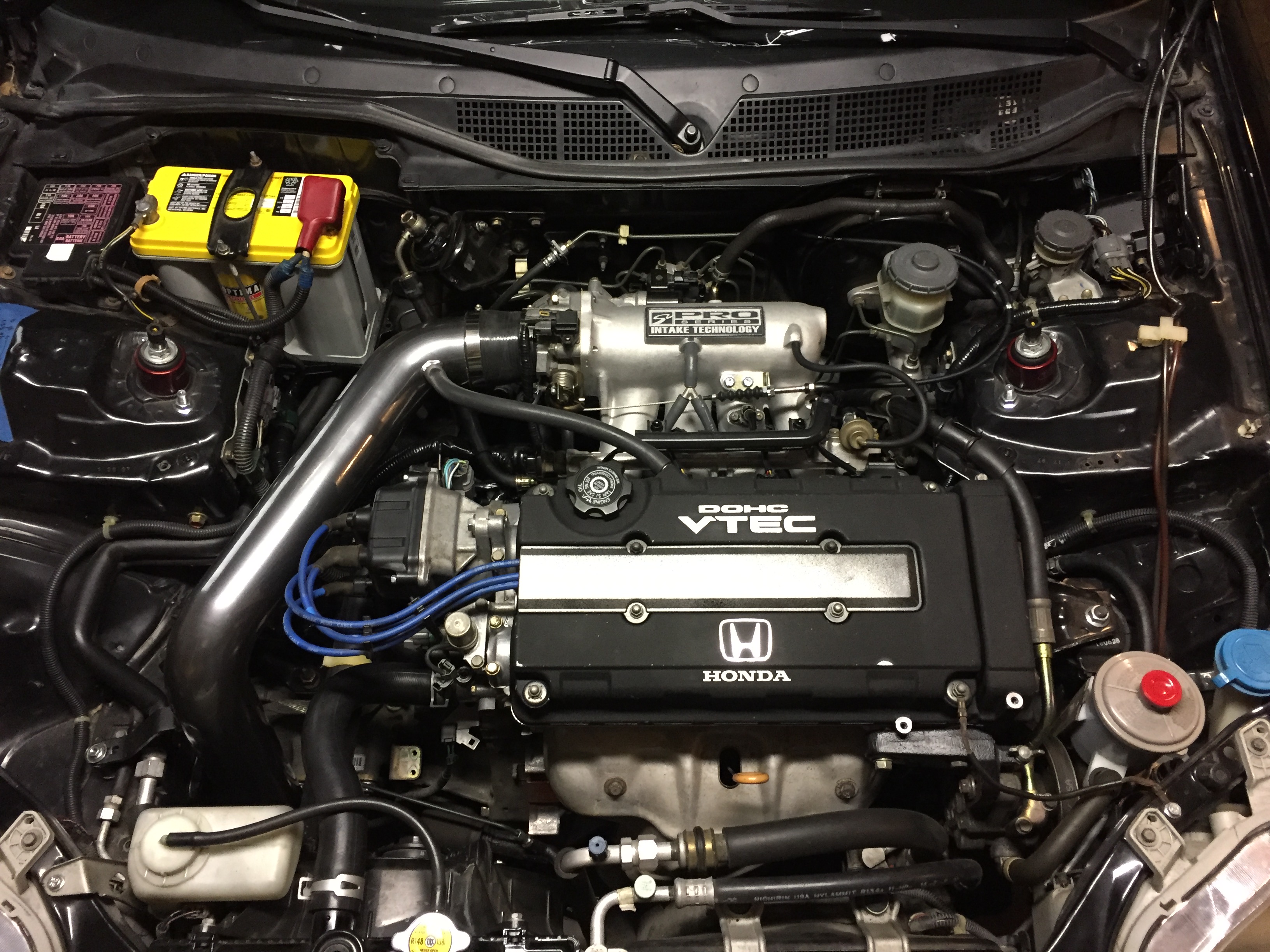 Lost a fair amount of mid range torque, that I will miss, but the top end pulls much harder. Only a month and a half until the races start.

Recent days I decided to swap out the stock mount set up for a mix of Energy suspension front lower torque inserts, and a Hasport rear mount. I figured this would be the best compromise of making the engine stay in place, but not send too many vibrations into the cab. The combo so far has worked really well. Not as solid as all 3 Hasport mount installment, but just right for a sunday cruiser/ track car mix.
Truth be told, I previously used the old tuner trick (from the 90's) of cutting coolant hose into pieces and putting them into the 'open' areas or the front torque mounts. While this worked well for what it was, I found when they were loaded at full throttle launch, they caused almost a 'bounce' with the engine, because its still rubber.
After the mount install, vibrations were enough to make my hands numb on longer trips. After doing some homework, I decied to try some tricks from motorcycle heads, and fill my steering column with lead shot. The results were better than I had emagined. Now I feel the vibs more in the pedals than I do my steering wheel. I also figured while I had the steering wheel off, to swap it out with a S2000 unit.
I stared out by using silicone to seal the top and bottom of the column. (Note: I leaned the hard way to use silicone caulking that does not emit VOC's while drying, due to its nasty smell that doesn't go away-So yes I went to the junk yard for another column after the first fail.)

I picked up lead shot from a local diving store, and filled the column full of them, them sealed the top where I poured them in. Final piece was I wrapped the bottom shaft in Dynomat.

Heres the before and after photos of the S2000 steering wheel

Much better.
I will continue to find new ways to battle the vibrations and post them. Next I plan on installing to specialty OEM bolts that have rubber and weighted mass on them to help isolate the vibes. Cheers

Its the little things.... like searching for A/C caps that are Black that fit the Honda factory lines. After a month of sourcing, I found one from a Nissan, and one from a Toyota- not a one size fits all affair.

MotorMo said:
Its the little things.... like searching for A/C caps that are Black that fit the Honda factory lines. After a month of sourcing, I found one from a Nissan, and one from a Toyota- not a one size fits all affair.View attachment 40027
Click to expand...

A month! lol I probably would've just spray painted black the original ones lol it's always the little things

Finally installed a wide band. Went with the PLX, as they have never given me issues in the past.
I wanted to run the power and ground source on the same side of the dash- I used the power from the fuse box, (I found that EK's and DC's factory fog light connectors are the perfect fit, so I robbed another one from the junk yard) and a factory ground location on the left side kick panel. (Bottom right of picture)

Decided I wanted to run an auxiliary switch so I can work on cold start tuning at a later date. So I looped the ground wire through a switch I had laying around.

Got the exhaust bung welded in, and began the routing of the O2 sensor wires. This went remarkably well- Found an old plastic double 'c' clamp from another project, and it fit perfectly in the power steering high side hose grommet and secured the wire up to the bottom of the manifold. I then used a wiring loom bracket with two 7mm eyelets in them to bolt the connector to the manifold. It all fit perfectly, so great when it all comes together that 'easily'.

Ran all the wires to the glove box where I put the PLX controller box. I got a custom instrument bezel (hand made) to house the gauge. Here are some final photos-

How are the Ferrea Springs and Retainers holding up with the Stock cams. I'm nervous with daily driving titanium retainers.

I've never had any problems with any set of Ferrea Springs/Retainers. I've ran two sets of them personally, on two separt different builds. Upgrading your valve springs is a worth while investment- keep those valves closed when they need it most at the high R's, even with stock cams.
The last project of mine (DC2 B18C1) I built for Auto-x, Drag Strip, and to be the daily driver. I drove that thing 20,000 miles (including lots of stupid aggressive driving, on and off the track), sold it to a friend of mine that I raced against....Then he put further miles past that, and the engine is still running strong, no issues.
If you get the 'bee hive' style Ferrea springs, just make sure you get a machinist that knows what he's doing as it can be hard to seat the retainers due to the spring design.
No need to be nervous if its built with the right stuff.