You did a job well done with the engine bay upgrade of this car. I am excited to see how this build will turn out.

Nathan Brooks said:
I've been away for too long but man oh that engine bay is very nicely! Keep the good content coming brother!
Click to expand...

Cheers, think it still needs a good tuck job though

So had a delivery this week of a genuine Mugen spoiler I managed to get hold of.

unfortunately it took a small knock to the baseplate section in postage, but nothing that the paint shop can't fix 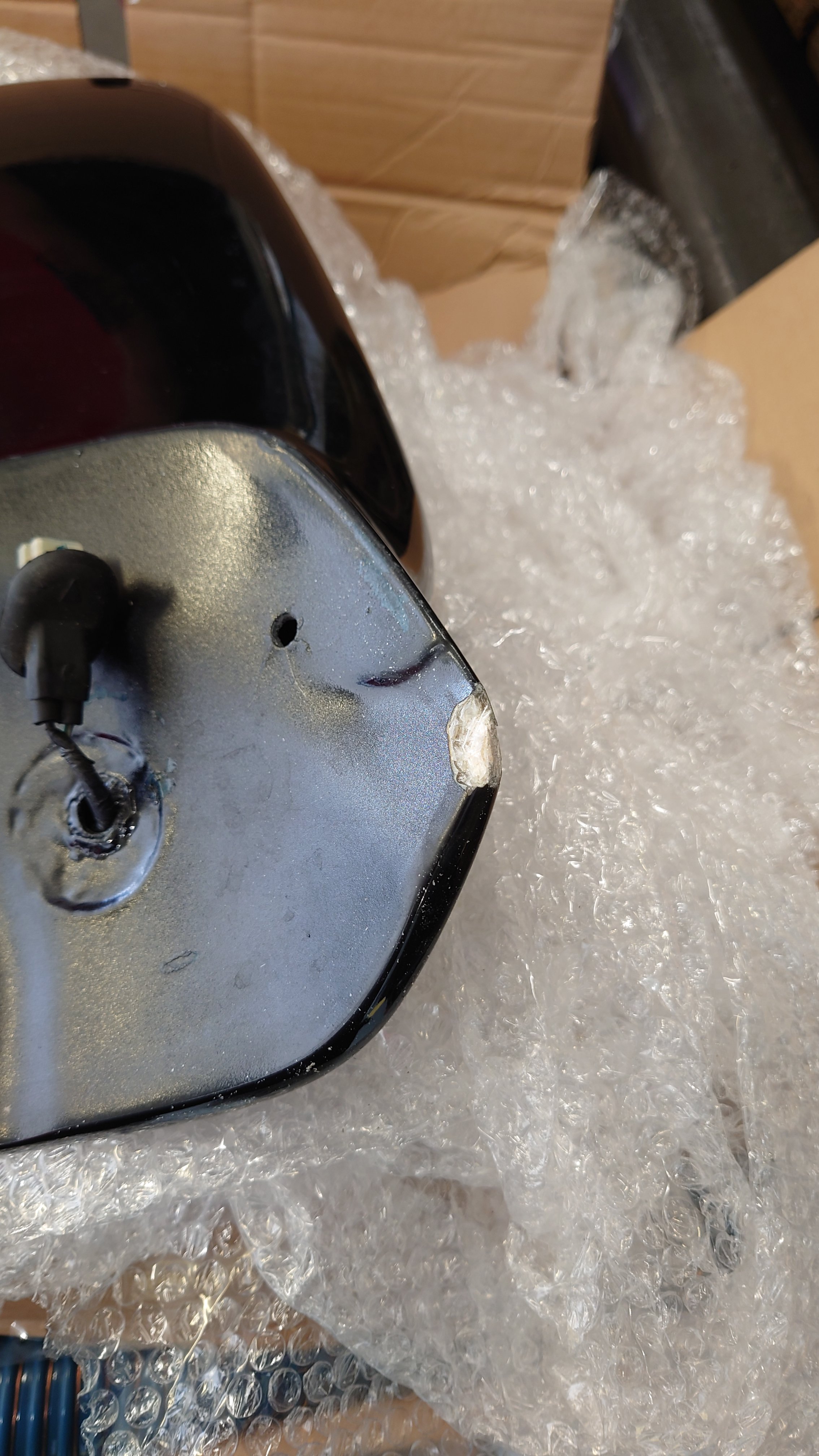 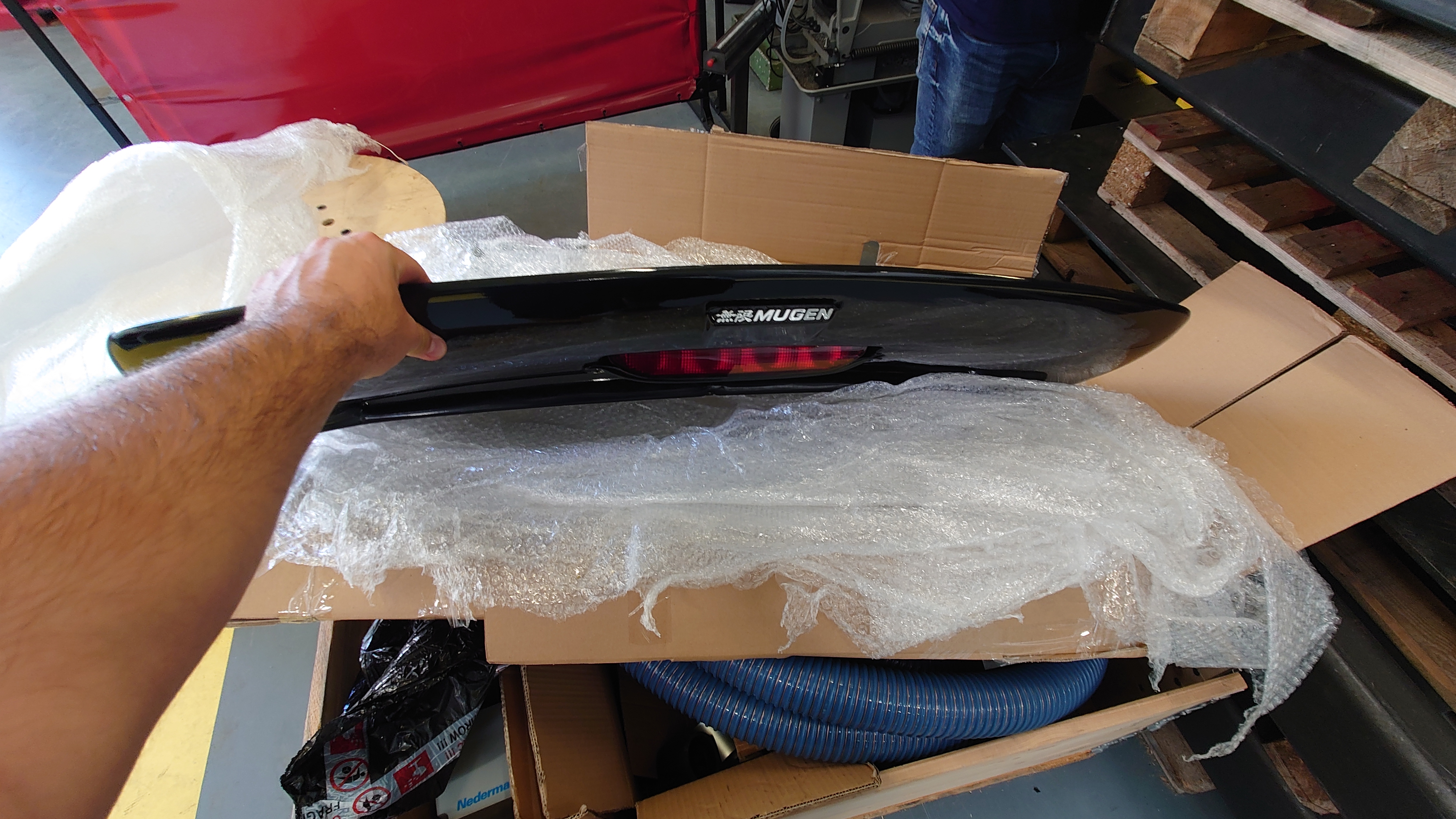 So the other week I took a day off work to go down and sort the car out at JDM Regt.

I knew the front jacking points had a bit of rust as I had been told by Jack @ JDM Regt. So I took all the gear I needed to fix this. When I arrived it was noticed that the rust was, as always, worse than expected. 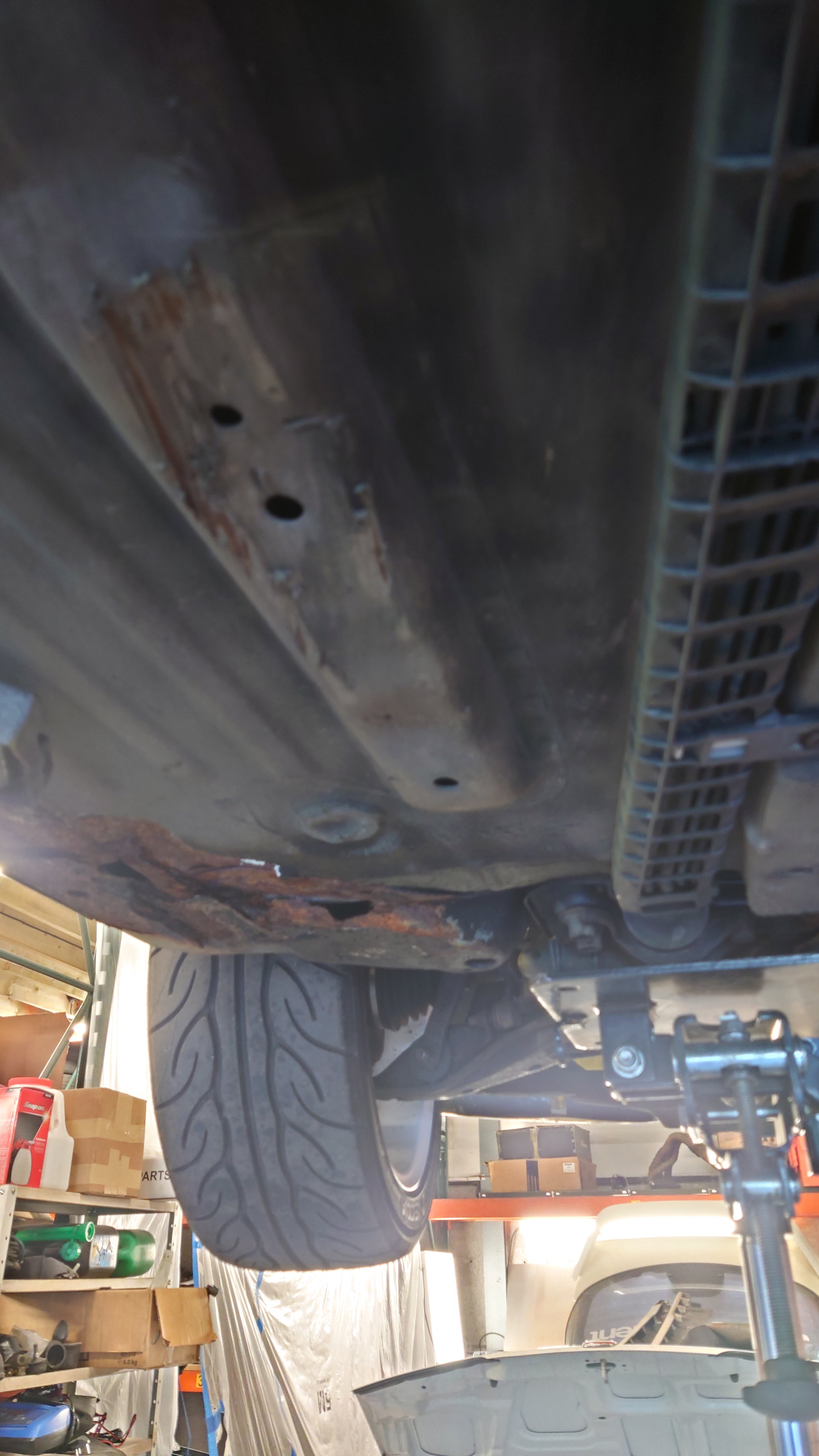 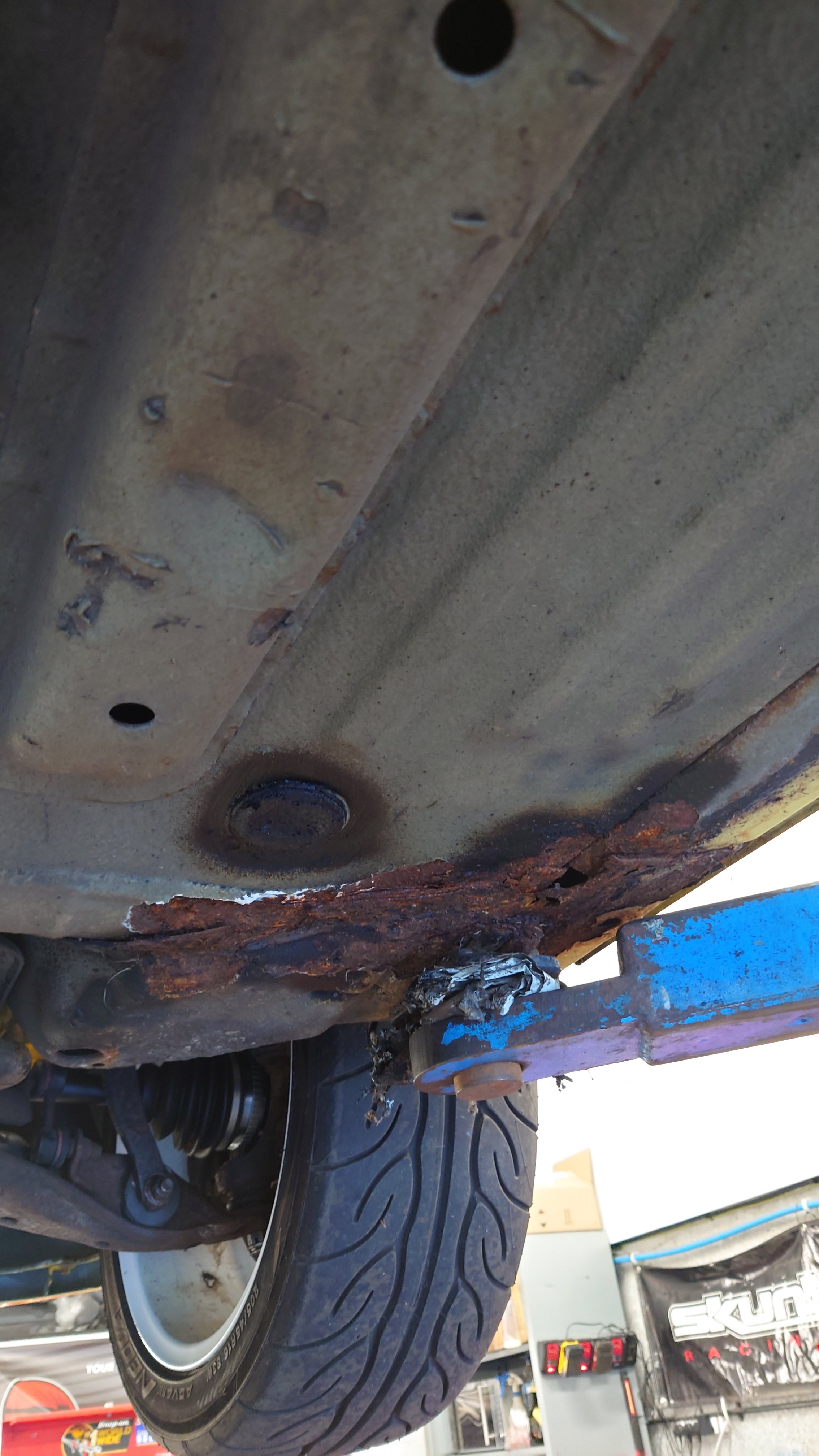 However all of this was cut out, new metal welded in. I am amazed honda used such thin metal, its a good 0.2-0.4mm thinner than most cars I have repaired previously. Jacking points were also remade and mounted in exactly the same place as OEM, we luckily had an EK9 to measure off on site. 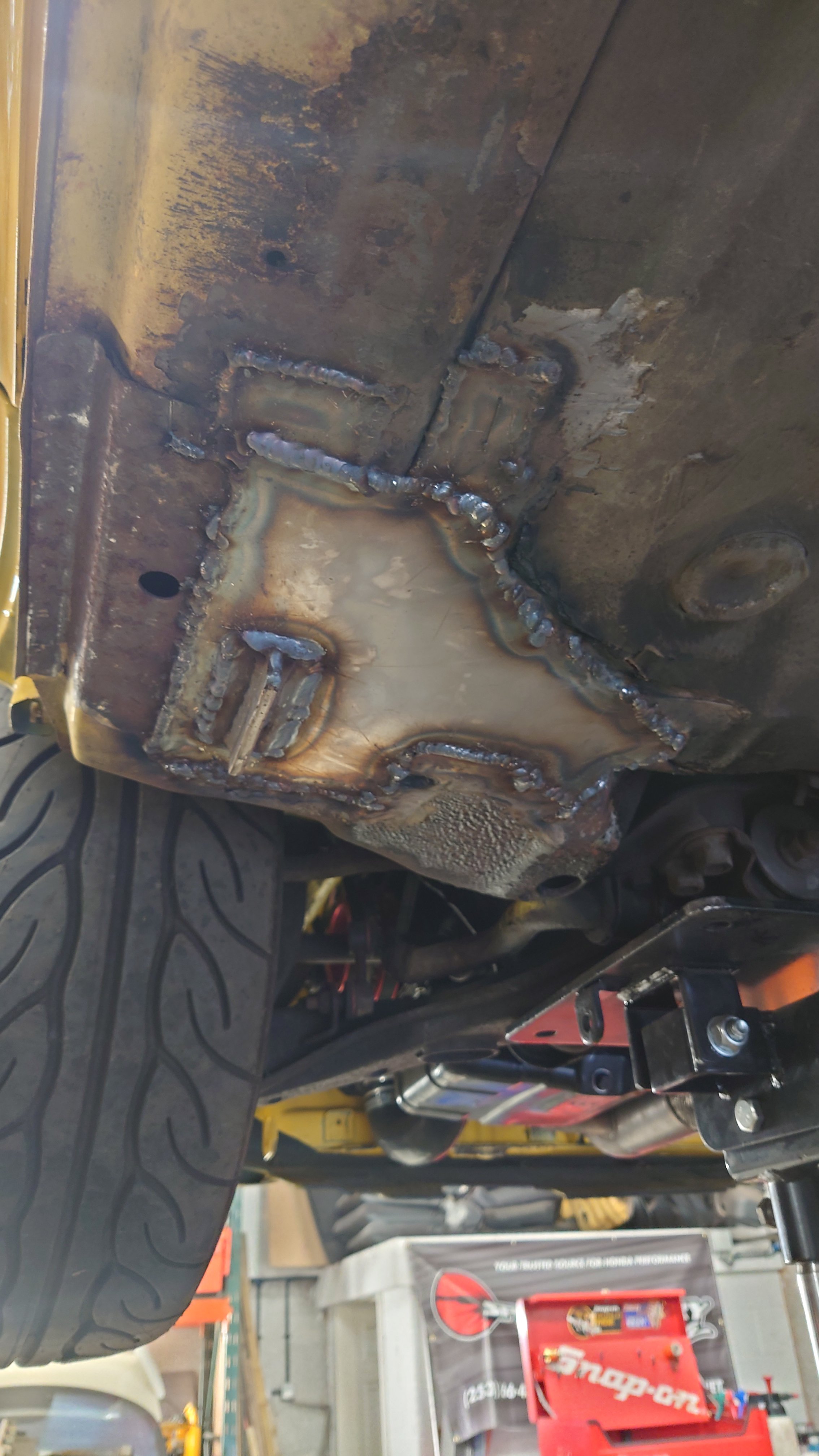 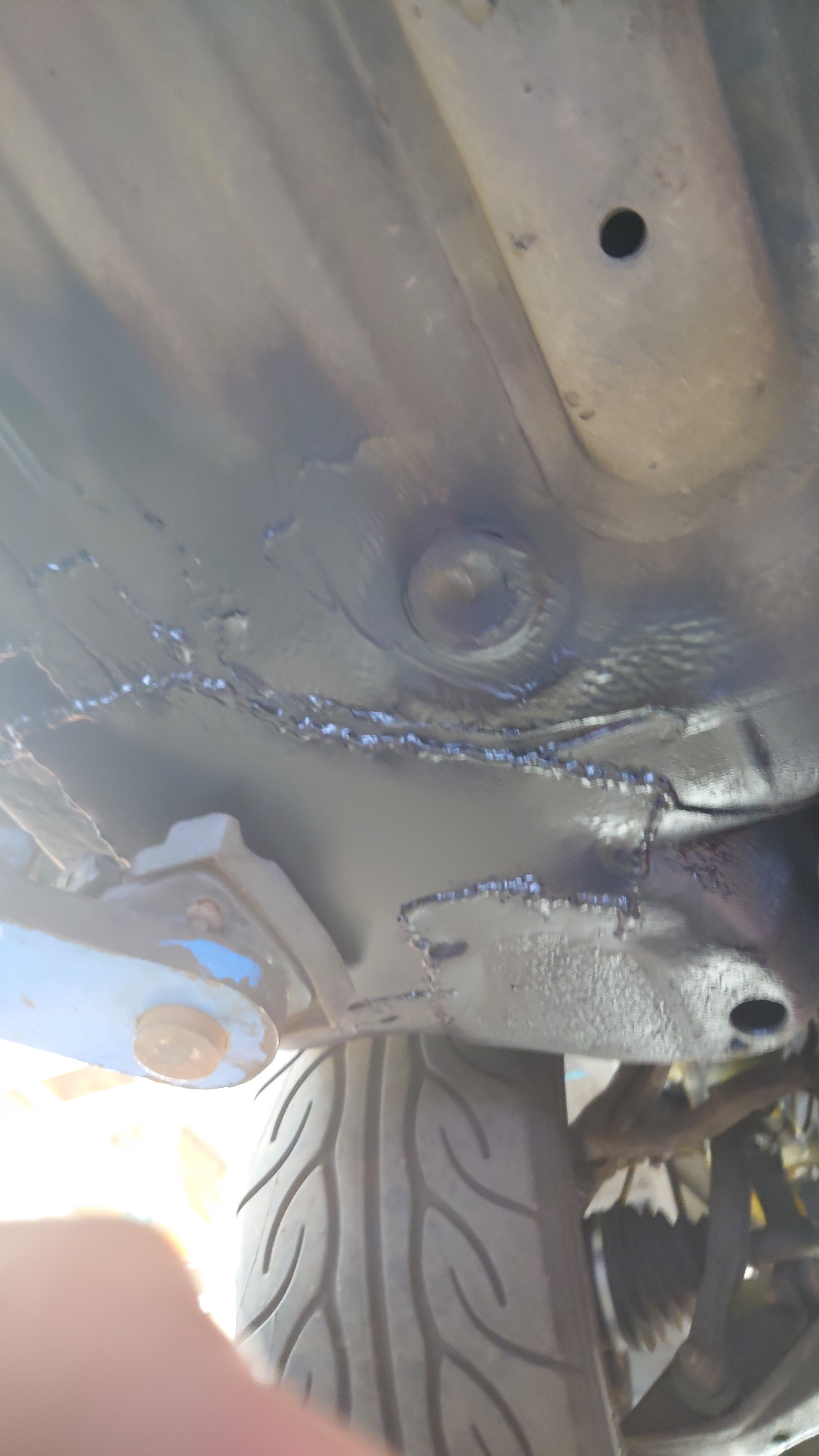 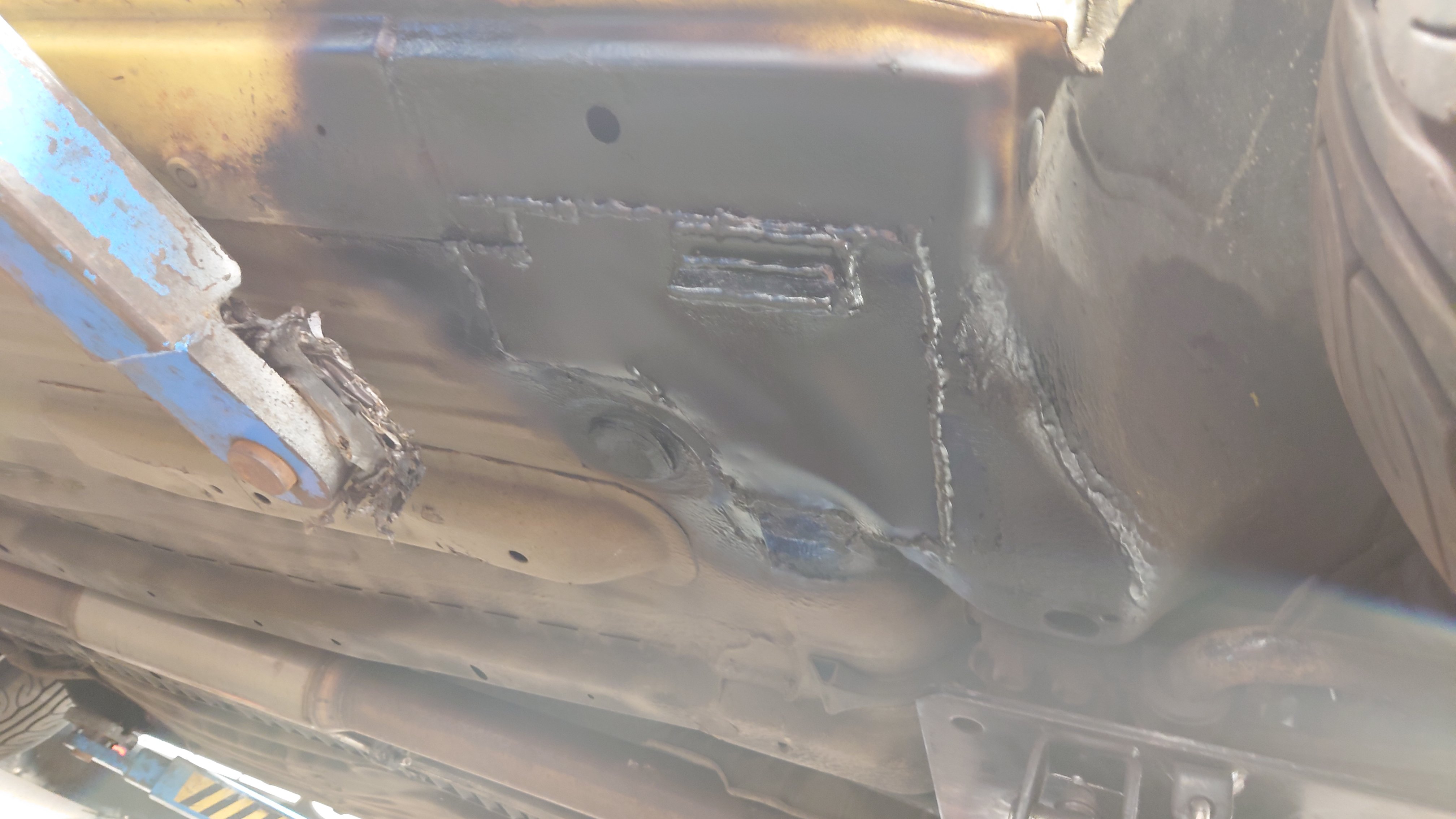 That is now all the rust cut out and sorted with the exception of a single tiny bubble on the drivers rear arch, so small I would rather leave it until the arch is actually gone before sorting as I imagine the other arch will also start going soon enough, joys of a 90's honda hey?

I grabbed a nice shot of it on the ramp once done, think this is the first one with the plate visible I have actually. 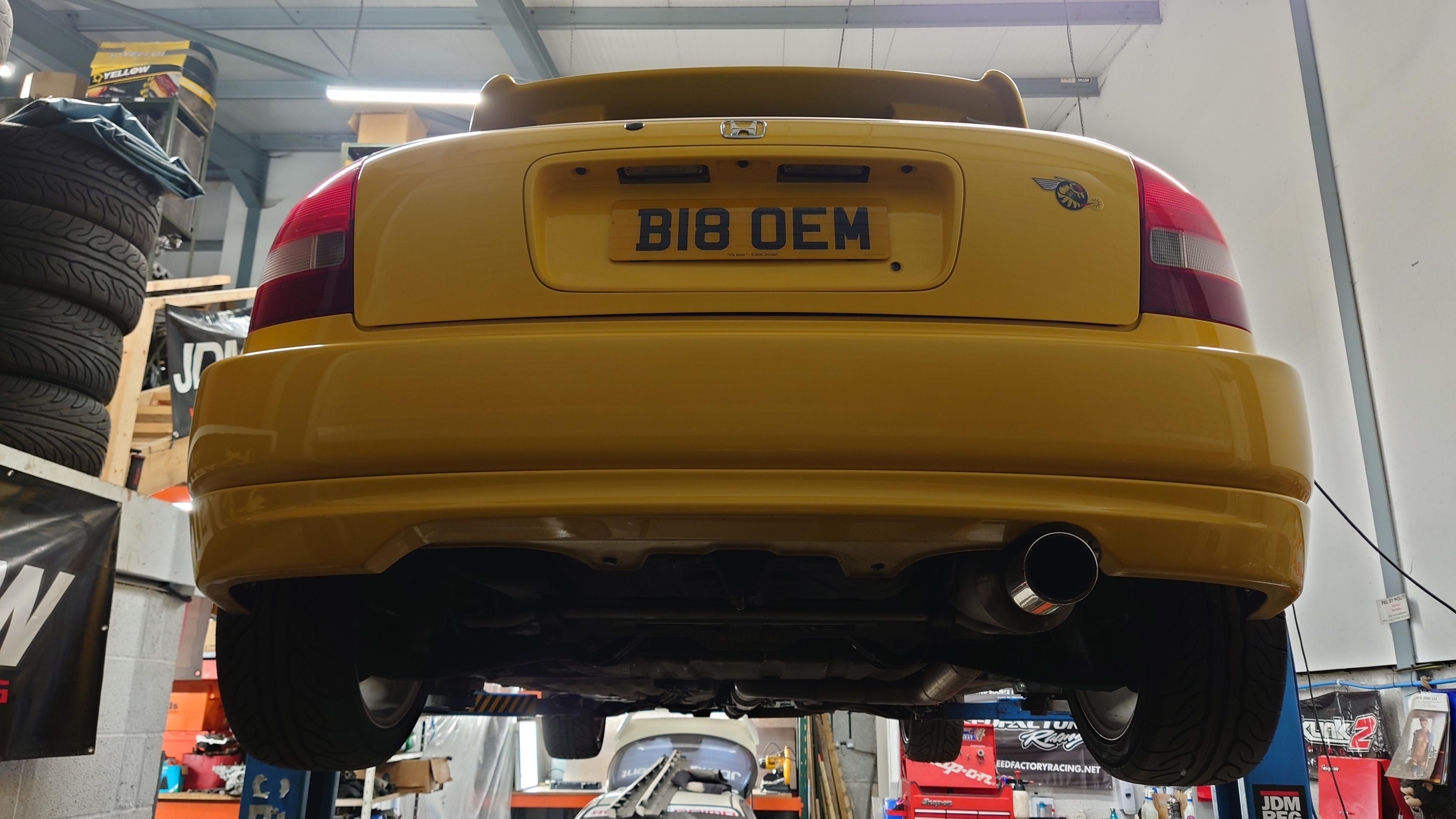 Grabbed a spoon front strut brace a couple weeks back too, looking for a rear one now, but I think I may be waiting a while!

I also went on Friday to visit @mitchj93 and collect the flat floor he had made for an EK. I had to cancel on him last minute last time we organised as I was still sorting the above out. Not a drama for him, what a lovely guy and a great looking car. I hope your big plans pay off over the winter!

Dyno is due end of the month, so fingers crossed it goes well this time and I can get the car back home. Might even make an appearance at the Mimms Christmas meet, but I doubt it given the salty roads and the last few bits I want to do prior to actually taking it to a show

double check that water isnt leaking into the car from behind the dash. or that section you replaced will rot again.

spikeyhairdude said:
double check that water isnt leaking into the car from behind the dash. or that section you replaced will rot again.
Click to expand...

all checked when fixing rust, it rained like stink the whole way down and had done the night before. Had no damp in the footwell either so all looked good

So I got these images back from my machinist, part should be with me in a week or so when he drops off a load of work related stuff.

If anyone is interested in a custom oil cap, let me know and I can get him to price them up (honestly was cheap compared to what I expected for a custom billet piece) 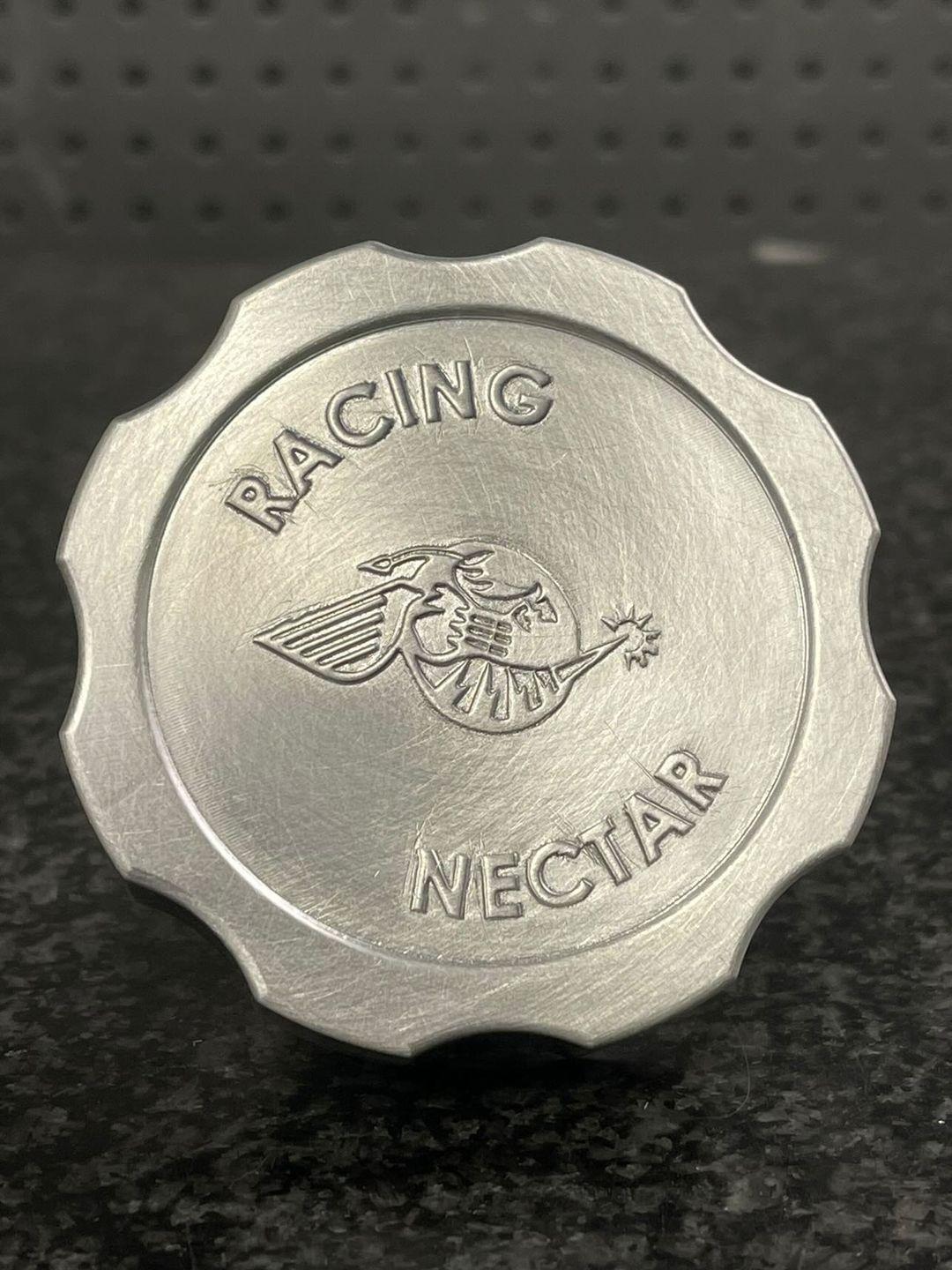 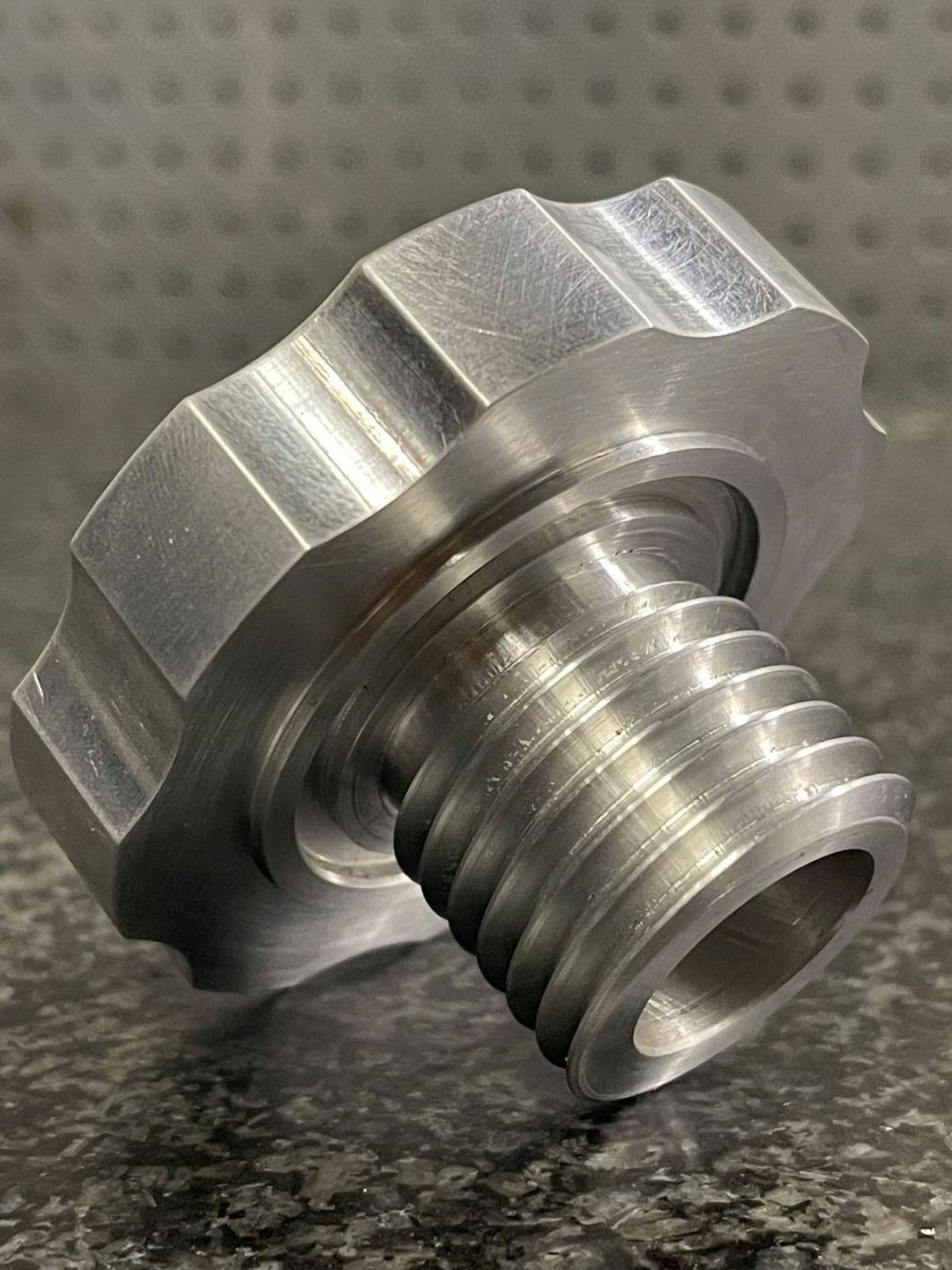 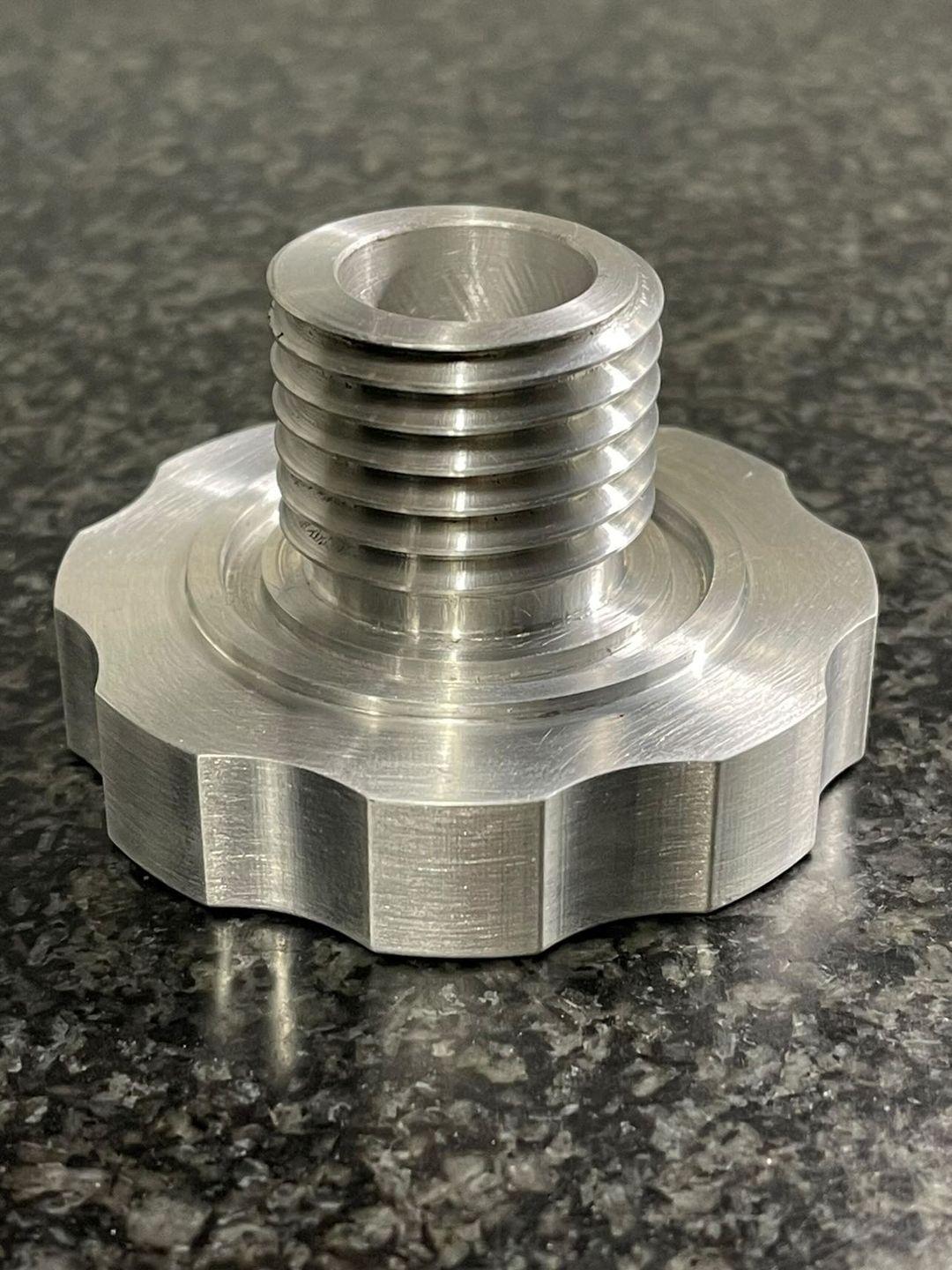 So finally got some the mugen wing back from paint, it looks amazing!

Cant wait to get this on the car 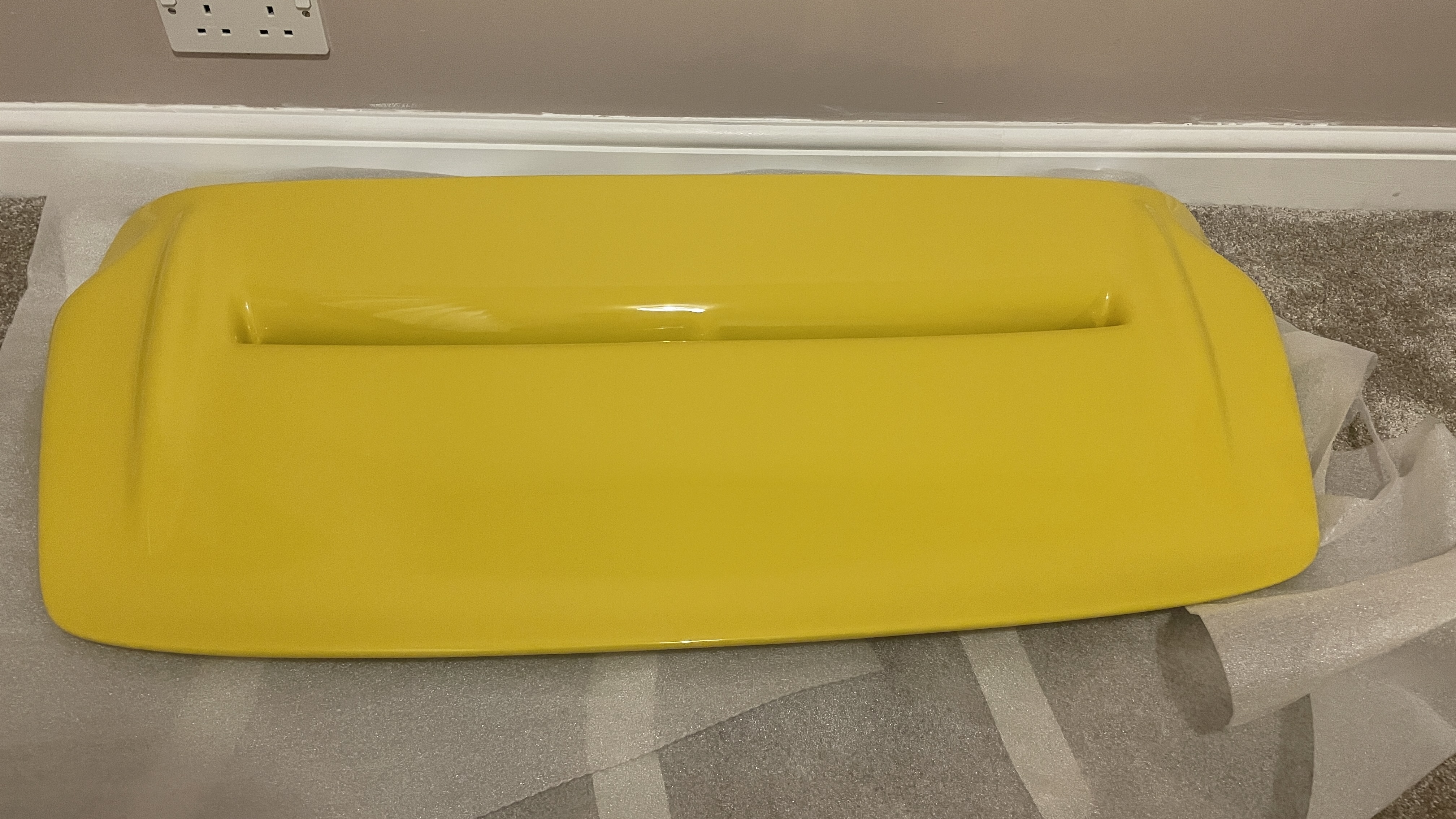 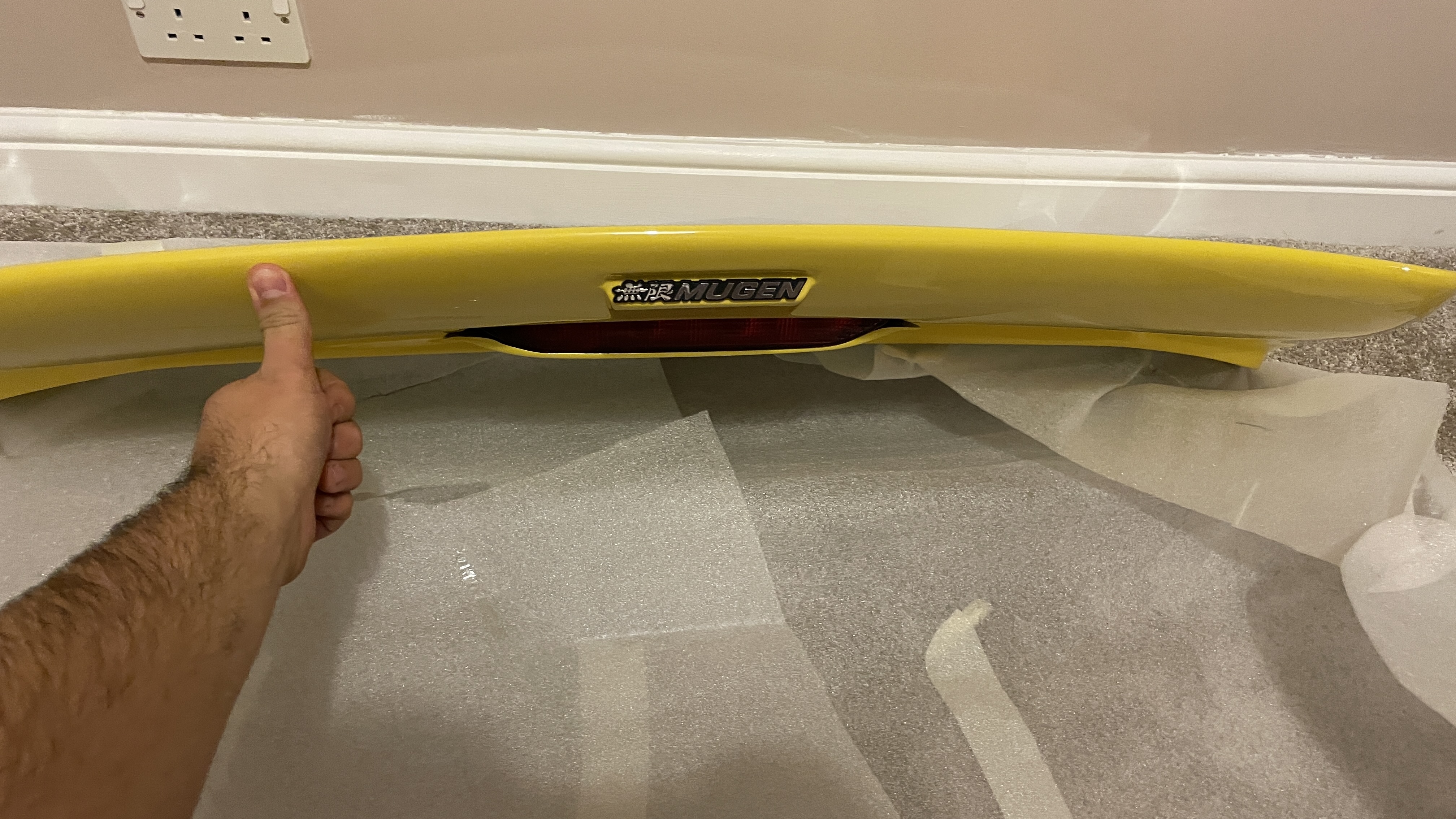 Just a quick update, was on the dyno the other day and all seemed fine until a power run was done.

She was down about 150hp. After a thorough check of everything it turns out that the boost had been turned down from 22psi to 9psi for running in and nobody had noticed or checked

annoyingly this was the only issue and other than that she was running spot on - thank god, given the amount of issues I've had.

Back to the dyno in Jan for the power runs under more boost. Honestly only looking to get to over 400 rather than being just under it. Then when the time comes I know I just need a bigger turbo and fuel pump for more power

So had it on the dyno and had some detonation issues in one clyinder. turned out the ecu calibration of the crank angle sensor was out.

Apparently this was calibrated and the issue still persisted.

Awaiting the strip down to find out whats actually wrong now.

Wish this thing would just work

So one of the exhaust valves on the affected cylinder had a hole blown in it, this then scratched up the piston.

New piston, set of exhaust valves and then bearings to be safe and hopefully dyno run will go well

Luckily no other signs of anything being wrong, for once the oil was mint and cylinders were fine

Ayo, got the car tune and everything on the car is well bro?

Nathan Brooks said:
Ayo, got the car tune and everything on the car is well bro?
Click to expand...

Erm no... got everything ordered. Valves have arrived along with new stem seals, but the piston is still in transit from america

iRELOADED said:
Erm no... got everything ordered. Valves have arrived along with new stem seals, but the piston is still in transit from america

Waiting for that and then the engine can be assembled adn back in for tune
Click to expand...

Ahhh, understood, the long wait of delivery, many days I wish ACME was real with Delivery, guaranteed whatever you ordered in 10-15seconds

So more bad news came my way today, the head is scrap...

Valve guides ended up getting distorted while it was running on the dyno with timing out. They were so bent they wouldnt come out the block.
Block was also distorted slightly and after measuring there was not enough metal left to skim it flat.

So new virgin head has been sourced and hopefully that can be used. A nice simple swap over tbh. It will be getting some flowing work done before fitting to match up to the standard of the old head.

While I am annoyed that yet another thing has gone wrong I am glad that it was found now, rather than going back to the dyno and letting go or when I am driving.

Now on a timeline for end of month completion back at the dyno. This is dependant on the new head being good though.

Engine is now back together and ready for dyno, just waiting for a date now

Good stuff bro, any luck yet on dyno date or nothing yet?

Nathan Brooks said:
Good stuff bro, any luck yet on dyno date or nothing yet?
Click to expand...

Wont find out until later today once my guy has been down to the dyno. Even then it could be later this week I find out once he has checked his schedule as race season is making dyno time a bit of a pain to get from him
S

Man I cant believe what you've been through! I hope this is the one mate. Car looks great and awesome details!
You must log in or register to reply here.
Share:
Facebook WhatsApp Email Share Link
Top