Evening all, thought I'd make a post as since Facebook became popular everyone seems to do stuff on there and forums seem to be dying which is a damn shame as forums have helped us all out I'm sure.


Some of you May or may not remember my old Civic:

Made up of mostly eBay parts and stuff acquired second hand but I loved that bloody thing, even gave it a Z6 head with a D15B cam and it went pretty well. The time has come however to do it properly, only recently started but this is the beginning of a full on overhaul and restoration

I'm not really sure what the end goal is to be honest, most likely something as a nice weather/weekend toy. Had visions of a stripped bare, fully caged, single seat with plastic windows etc but we'll see where it ends up. As you can see in the last pic I've been acquiring some goodies - skunk2 control arms and LCAs, beaks bar, ASR brace, Mishimoto full length rad from a teg, arch replacements front and rear and an MB6 brake conversion.

I'm a bit shitty at coming back to forums but will do the best I can, most pictures will be up on Instagram so if you have it feel free to follow me at christyfox555

nice shot of the rear too. Good luck on this next one!

Thanks mate, I saw it for sale on eBay a little while ago and the poor old girl looks knackered. Broke my heart lol

I remember you from back in the day on Civiclife haha! My mate Keifer had the EJ9 for a while too, was a cool car man. Looking forward to seeing what happens with the new one!

R1PPU said:
I remember you from back in the day on Civiclife haha! My mate Keifer had the EJ9 for a while too, was a cool car man. Looking forward to seeing what happens with the new one!
Click to expand...

Hey man, I remember your name too! In fact, I'm sure I bought something off you. Keifer bought it from me, when I saw it on eBay it had travelled back down here and was actually only about 20miles away from me again. 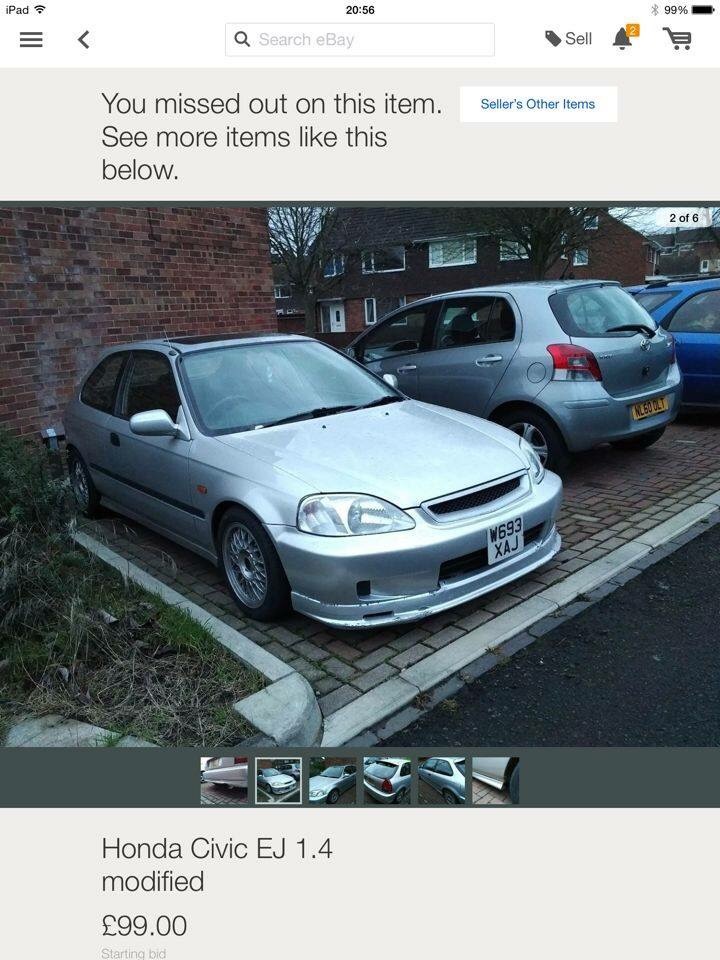 Look at the state of it man

N24NTY said:
Hey man, I remember your name too! In fact, I'm sure I bought something off you. Keifer bought it from me, when I saw it on eBay it had travelled back down here and was actually only about 20miles away from me again.

Look at the state of it man

Aha small world! Yeah sounds about right man! Nice to see old faces popping up Ahhhh didn't realise he was the guy you sold it to. Was nice when he had it, I remember he got a few bits painted at his work and changed the wheels I think but that was about it really.

Bloody hell that looks like its gone through the wars

Yeah, he'd done some good work. EK9 spoiler, recaros and some painting I believe. Yeah, like I said in my OP it's a shame forums seem to be dying out due to Facebook and the likes of. Thought I'd come back and add something to try and keep them going lol

N24NTY said:
Thanks mate, I saw it for sale on eBay a little while ago and the poor old girl looks knackered. Broke my heart lol
Click to expand...

Owh that sucks some people just don't care do they

Yeah, I think I'll just K20 this one and keep it forever. Saves the heartbreak haha

Aerial blank made up to be welded in. 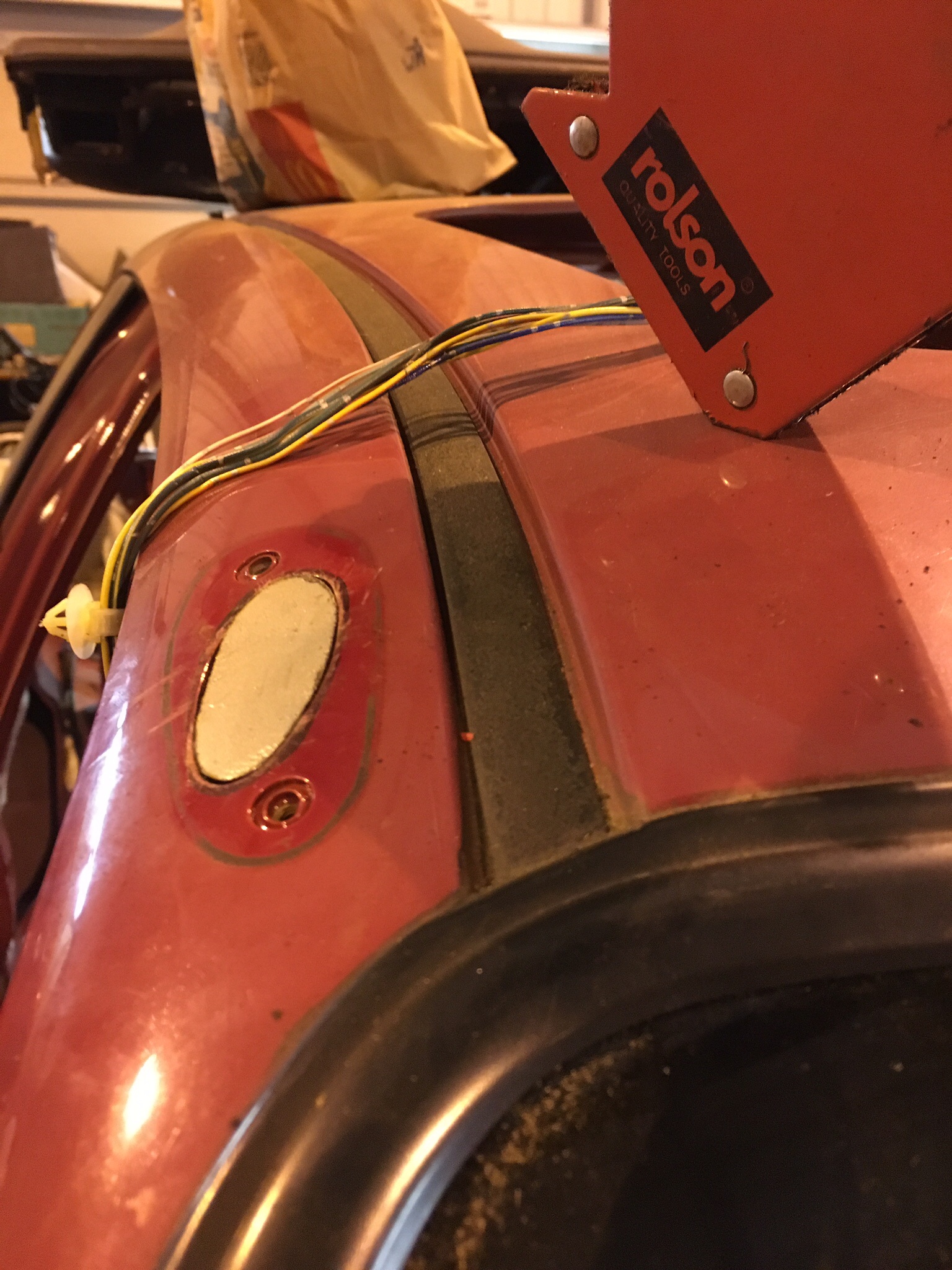 Subframe and forks cleaned up and primed. 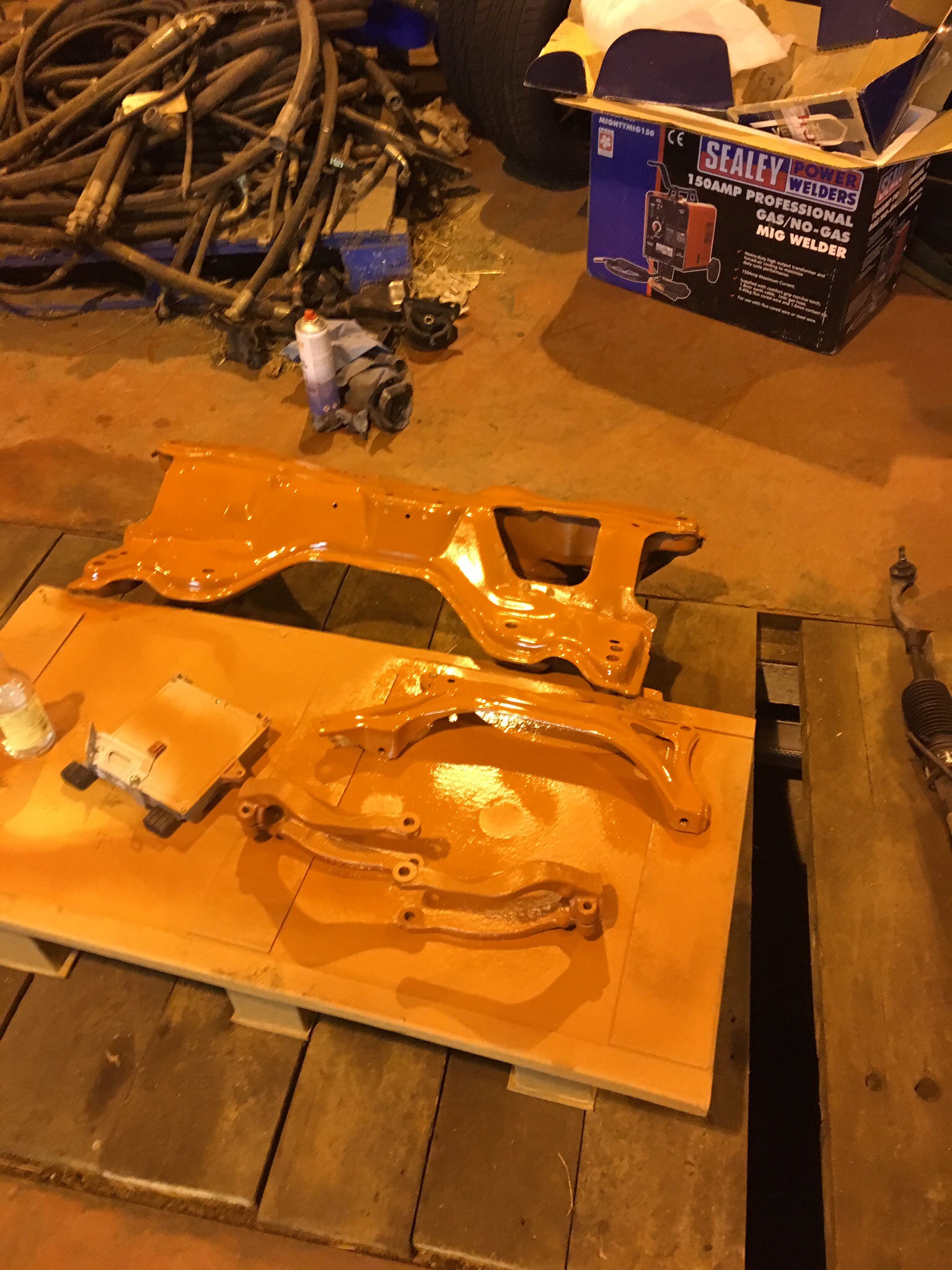 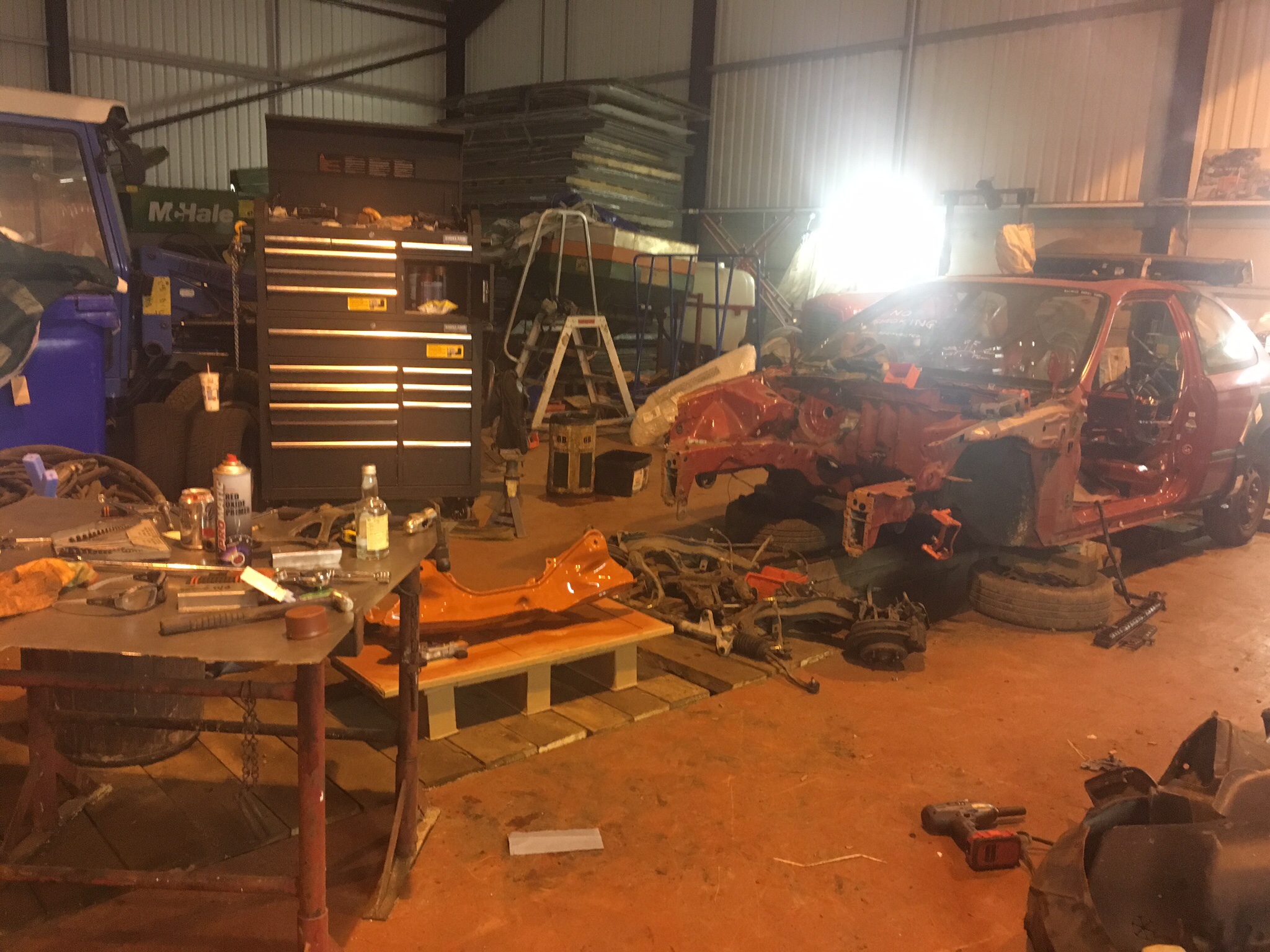 Starting playing about getting some ideas for switches etc 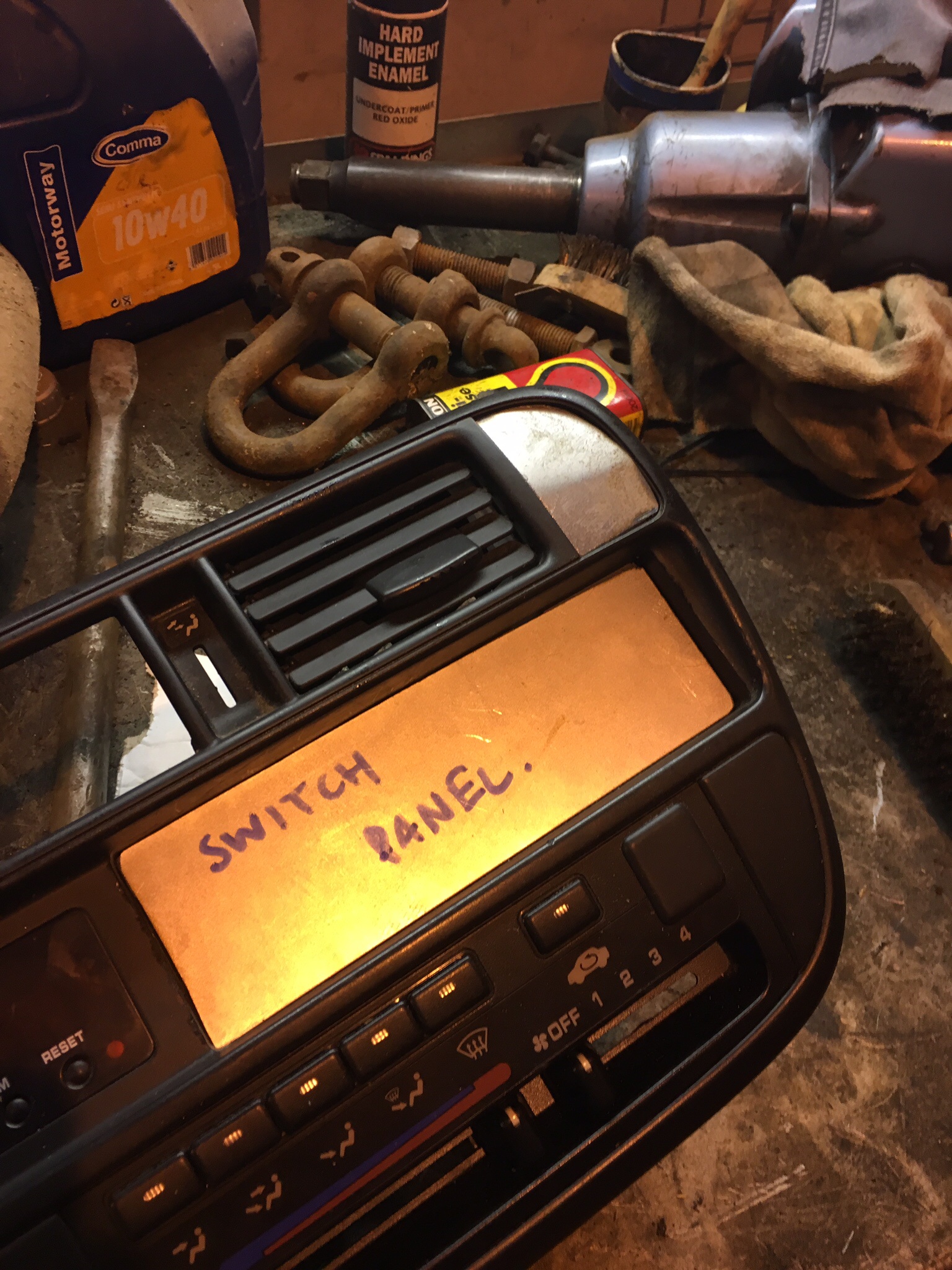 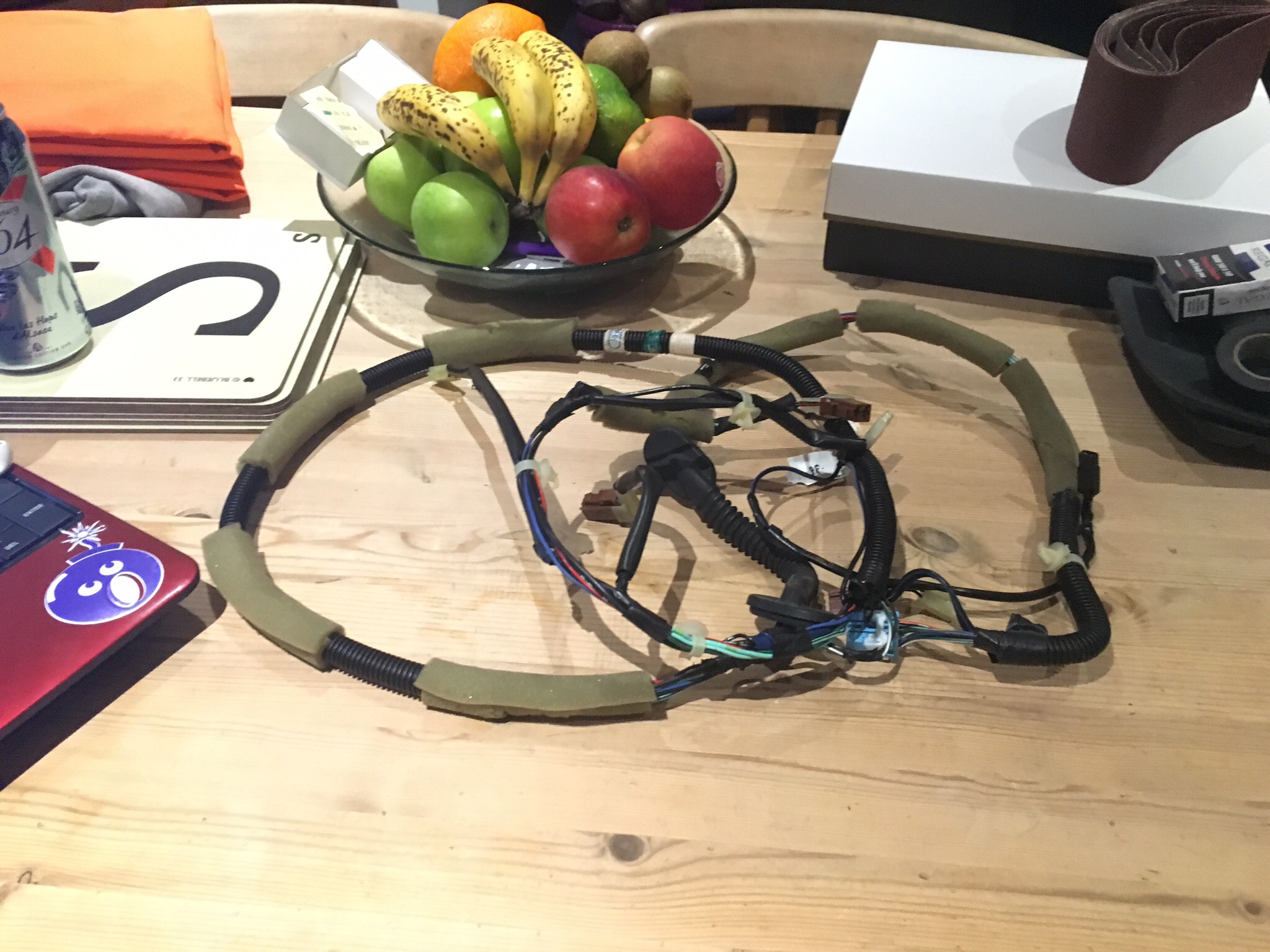 Stripped of all this 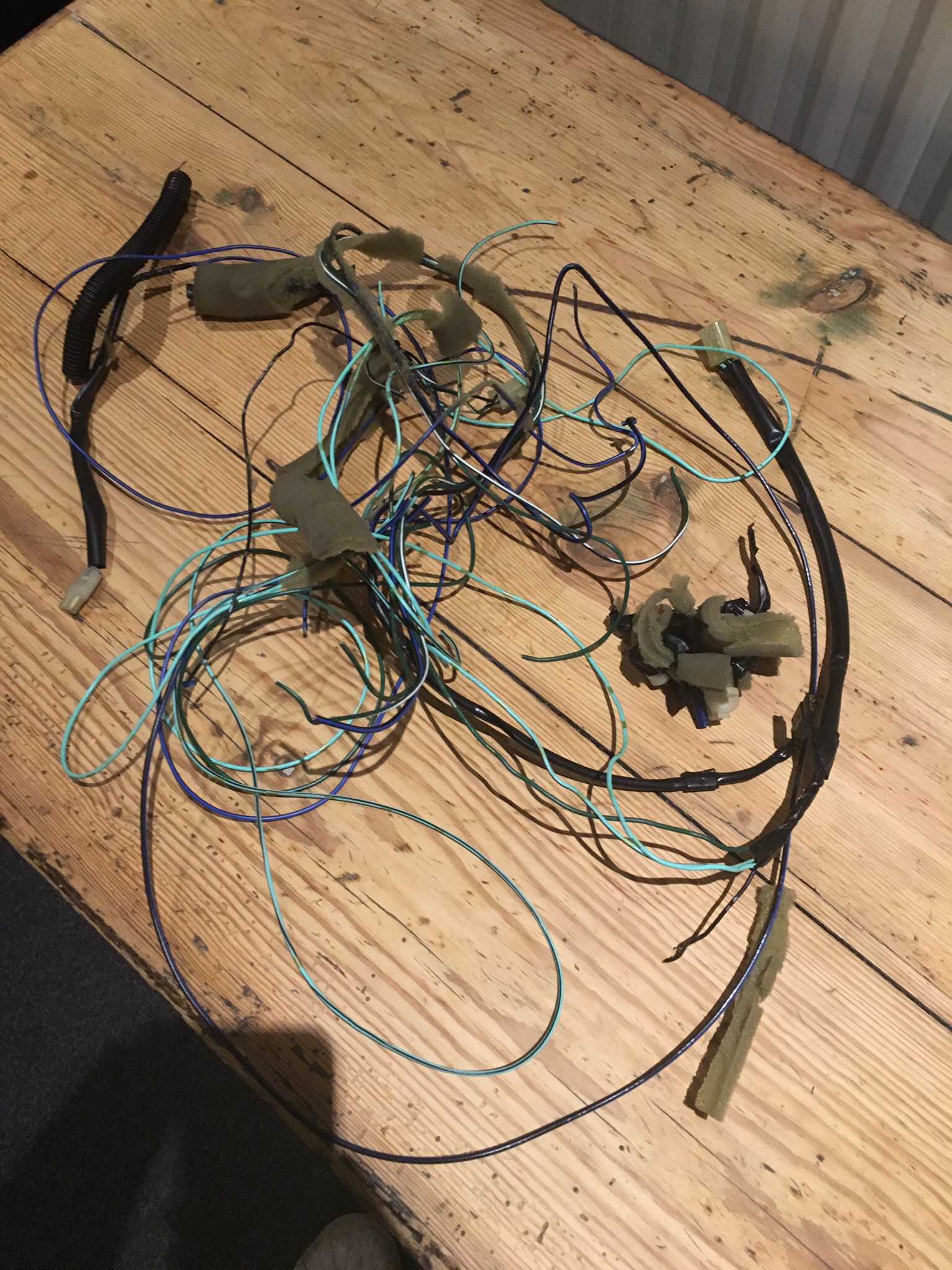 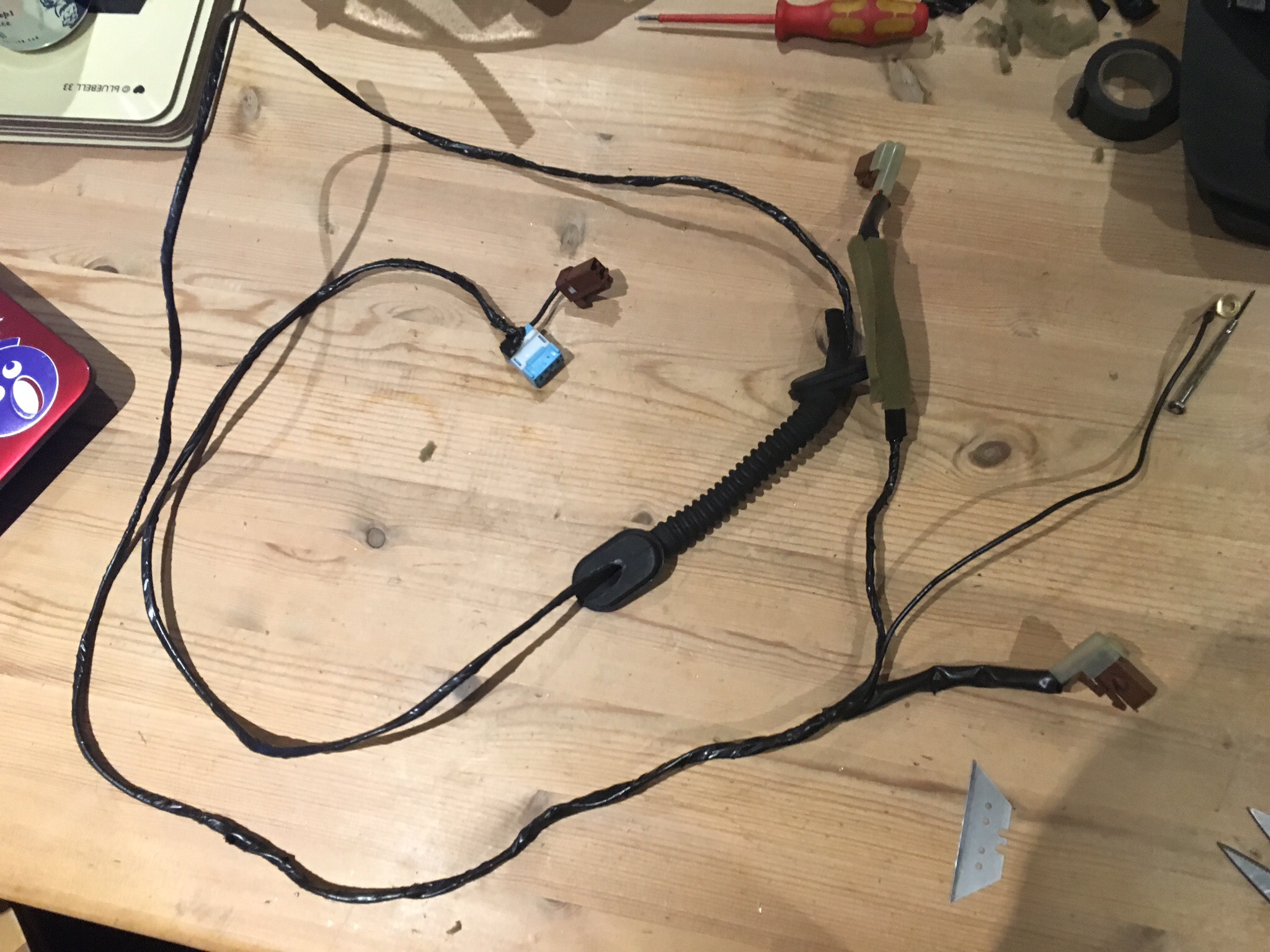 Made a few plates and cut out some rot yesterday, will get on with a bit of welding this weekend hopefully!

Not a lot done today. Seemed to have one of those days where nothing went well but here's a few of what did get done.


Started in putting aerial delete in fully. Forgot to take a picture of it done..

Thought while I had the welder out I'd start the "quick" job of fitting my Teg Mishimoto rad.

Drilled out the spot welds of unneeded brackets to free up some room.

Got a bit carried away and took out the entire centre section, not worried about losing strength as will most likely have to fit another top to bottom bracket to secure oil cooler...

I initially thought I'd be able to get away with only moving one of the radiator mounts, but lining up the radiator on one would mean it would be miles over to one side. Probably ok, but if I'm this far in I thought I'd go ahead and get it central...

Above pictures show where it would be in the centre and as you can see, nowhere near any mounts.


When lined up centrally, the passenger side mount landed on a notch in the panel so had to plate over and smooth it down to avoid getting a wonky rad.

Eventually marked up roughly where I want it, handily there was two spot welds EXACTLY where I was mounting it so drilled them out to add a little more strength.

Et voila, even left a nice amount of room to fit the oil cooler.

Hard to to see here but even sits flush with top of the panel.

The top mounting points were also a bloody mile away and to mount it at both sides I've seen some people create some monstrosities, I didn't want to end up like that so utilised some of the existing fittings on the rad and started mocking something up with some scrap...

them cut it to a bit better shape..

Had a test fit to the car to see where I had room the the expansion bottle and was made up to see with having moved the rad over to one side I could get away with the OE mounting point. Also got a few pictures of just how snug the rad fits in. Only 1mm to spare! 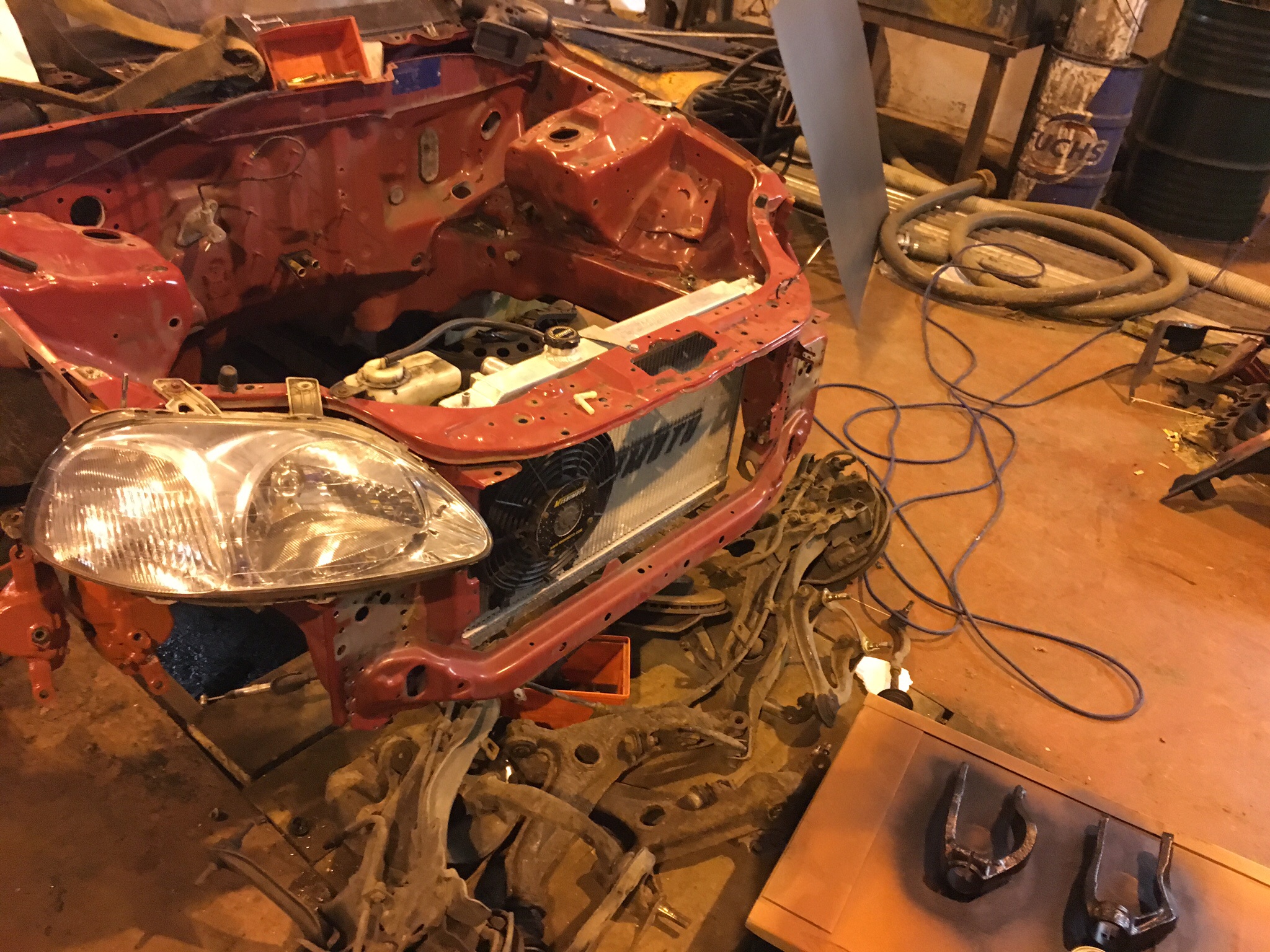 Will strip it all back down to clean it up and give it some paint and neaten up the rad top mount but I'm pretty happy with how it's turned out.

Think I might have a day of bodywork tomorrow as I've sickened myself of the tools a bit, and when I said not much went right today...

Props for taking on such a project, guessing you're a mechanic/fabricator. This is something that would be too much for me haha

will be following this

Cheers mate! Yeah I'm a plant mechanic by trade. I am a rubbish welder though that's why I haven't shown any pictures. Any real welder would crucify my welds haha

Morning guys, I didn't take a before shot but I dug my Sparco wheel out the other day and was gutted to see it's somehow ended up with paint all over it. Kept my fingers crossed it was emulsion and would come out relatively easily but unfortunately it looks like gloss and is proving rather difficult. I've scrubbed and scrubbed and got some of this Simoniz stuff and it has helped a touch... 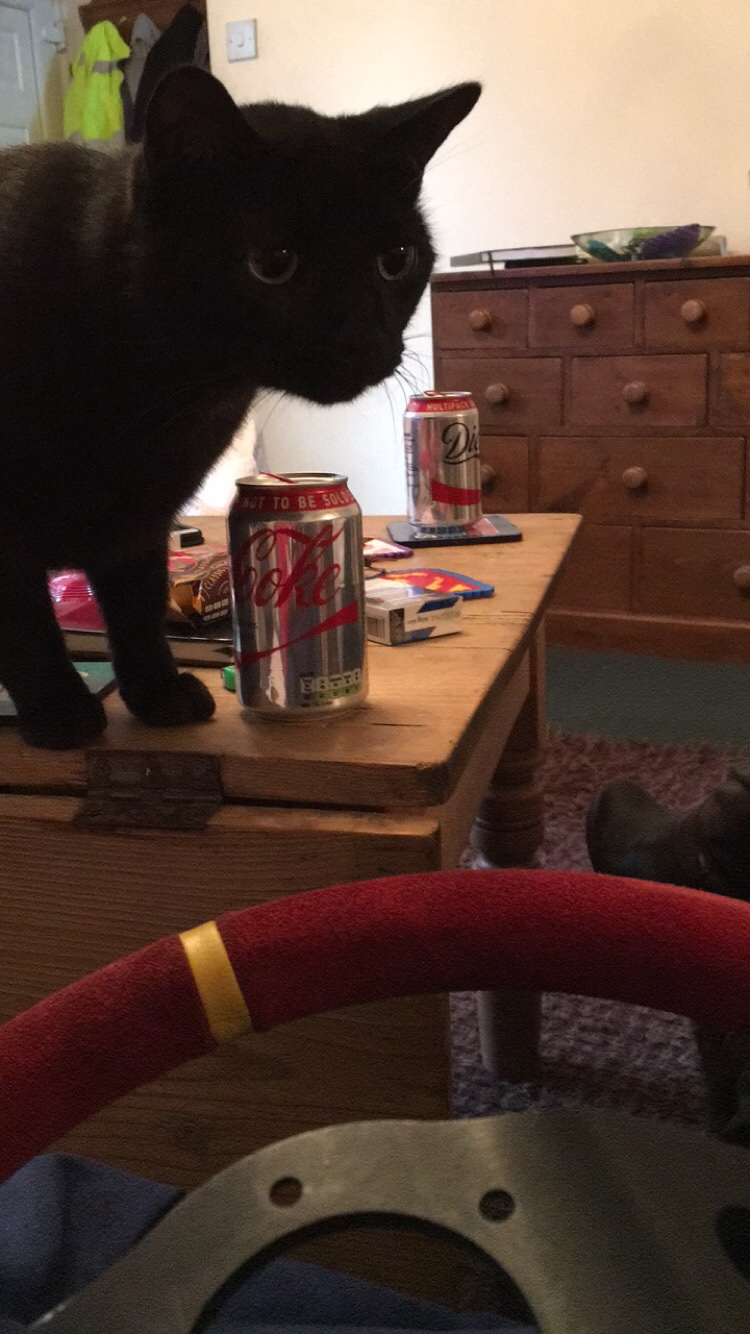 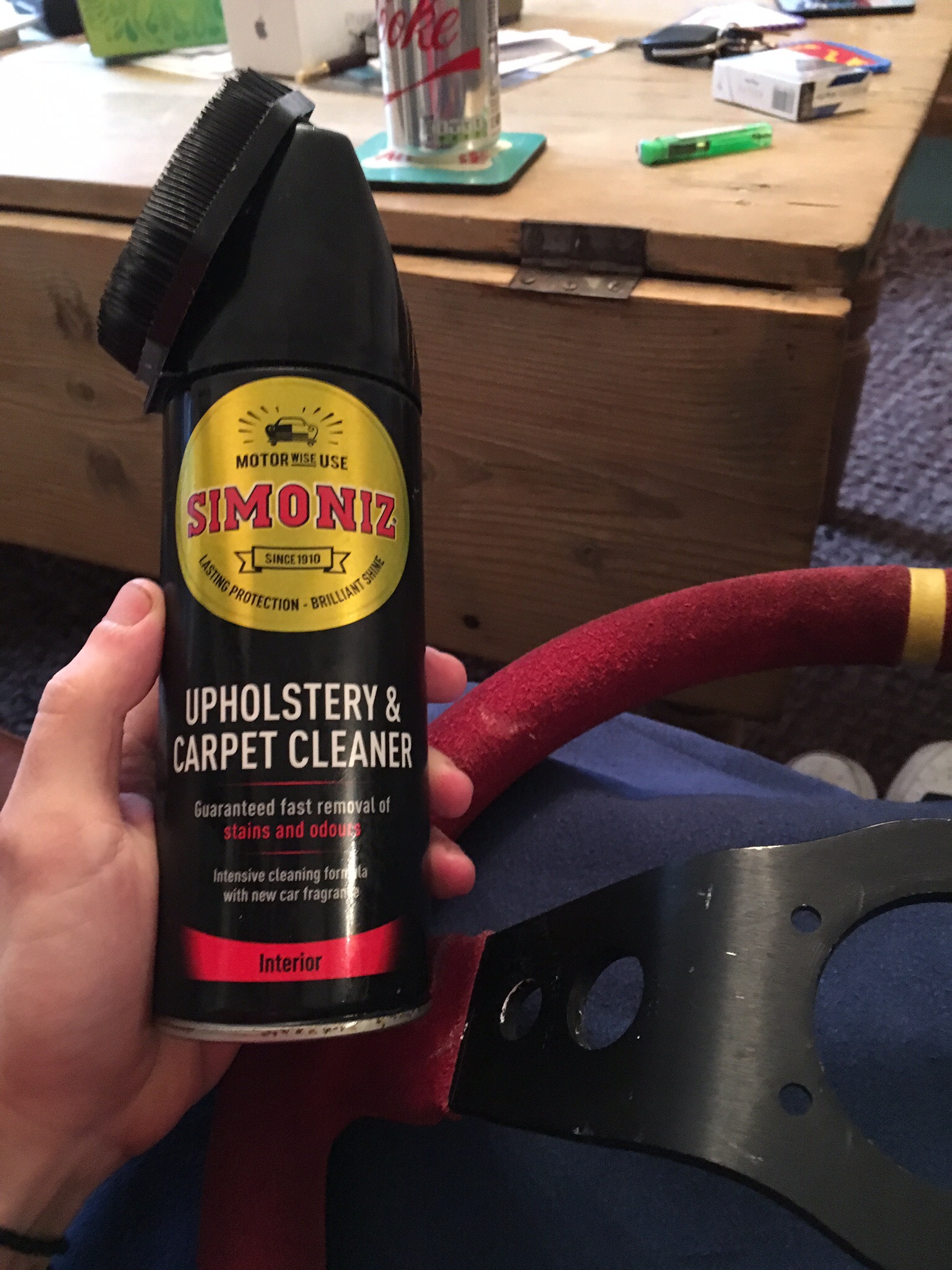 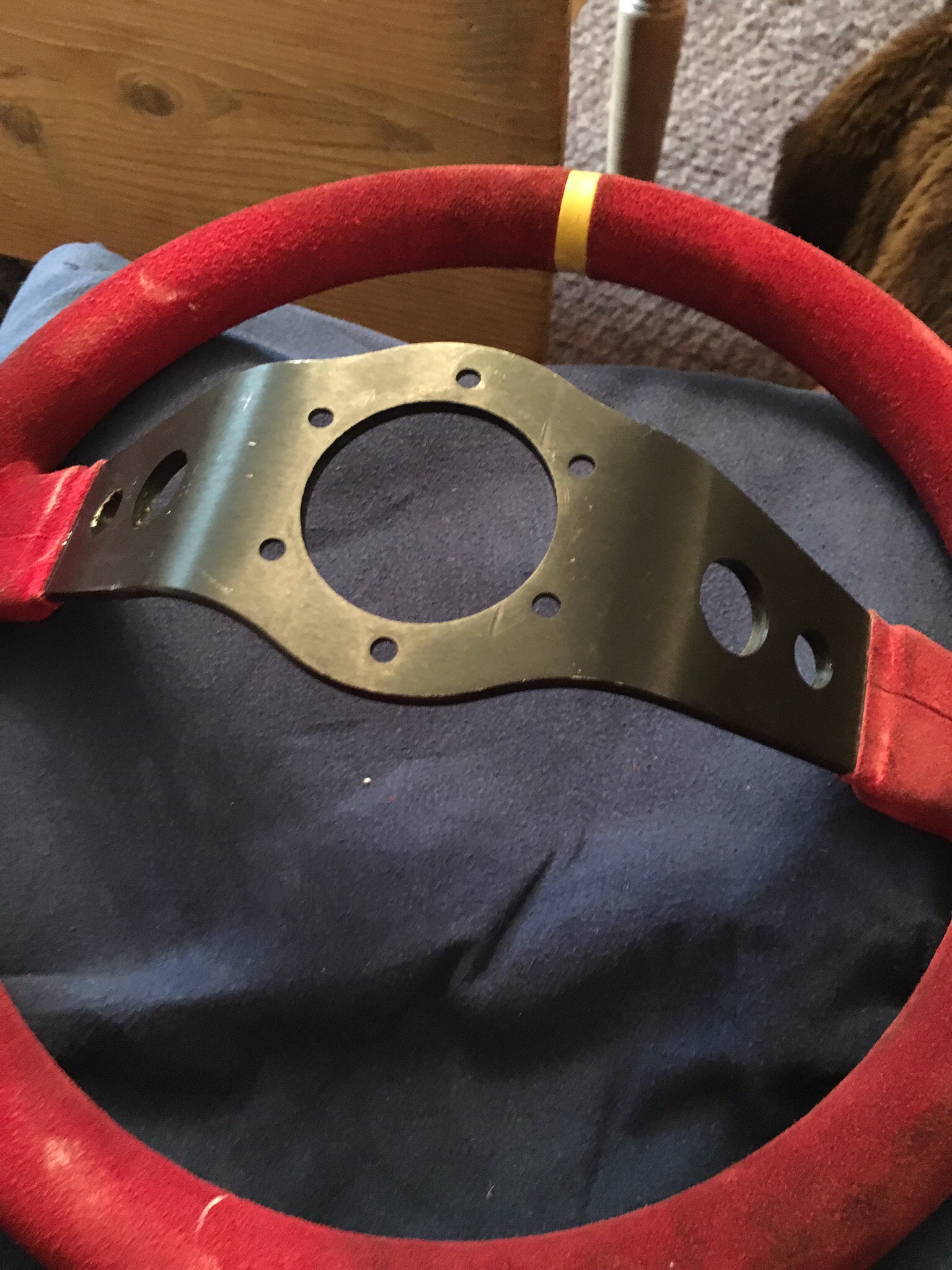 I know it'll never come up close to brand new but I've got a personal attachment to this wheel and really want to try and keep it. Does anyone have any ideas? Scared of taking the colour out of it by using thinners or the likes of.

Not much of an update, been having some bother with my new welder which is slowing down progress a bit but got a few little bits and bobs done...

Wishbones and hubs stripped of bushes and wheel bearings, bushes took forever and as you can see from the wheel bearing it's just as we'll I decided to overhaul the 282's before I fitted them...

Cost nothing and you get OEM figment which is a bonus!


Our lass restores old furniture for a hobby and is quite handy with a sander and filler so got her to smooth my front bumper. -1000 man points haha

Got ahold of some snazzy dash switches, this one will be used for ignition and will have the cover, the rest will all be the same switch but open. Love the little LED in the end. Simple touches.

Primed my new badgeless grill, was originally going to re-do the car red but now I've primered this white I think I like it.


Just waiting on payday as still broke as he'll after Xmas, will be ordering up some coilovers and a polybush kit to hopefully get the suspension side sorted and everything rolling again!

Eventually started on the shell, actually came to the sad realisation today that I've scrapped better cars than this haha Should make it something to be proud of when it's finished though!

Start at the front and work towards the back...

Actually got rid of the lip that causes tyre clearance issues, should add a bit of stiffness too which is a bonus!

Started stripped all the seam sealer out for stitch welding.

Turned the gaps from this...

Still got all this to attack!

Starting to think I should have bought an import shell haha

Holy fudge that last picture!!! Great work on this so far, aerial blank is something i want to get done too.

That's what I said I when I started attacking it mate haha cheers!

I did tell myself I wanted a project, I didn't mean this much of a project haha but the price of steel is pretty good at the minute so I'm confident I can get every square inch of rust cut out and replaced with fresh.

she be one stiff chassie,
Good job pal ,