I guess I will start a fresh new build, this time I will do it properly.
So some of you may or may not know me. I have a frost white EJ9, yeah not so special but have had it around 5 or more years now, first car and all. It started life standard, then B18cr swapped, never took care of the shell and it has developed rust and looks terrible in appearance. The B18 has gone now, still loads of parts left over in the FS section.
Now the plan is and I will be going ahead with it no matter how long it takes me;

K24 with over sized pistons and all the usual stuff like uprated pump etc
K20 head with some uprated valvetrain
ITBs
LSD box
3" aiming for titanium depending on price
hoping for a nice round figure of 300 and 200 on the torque side
It will still be a daily driven car so no over the top modifications, just something that can hold its own against the expensive cars if needed to.

Shell is going to be rebuilt, rust cut back and properly sealed up, new bushes, slightly larger brakes upfront, looking at kits such as yellow speed or wilwood. Bought a 5 hub swap to rid the big brake 4x100, realised the mg discs are thicker than ek9/dc2 so mabe thats why they were always binding ?

Weight saving in places, so unwanted interior brackets are going, got myself a Bride bucket carbon etc, will be caged, probably done by custom cages, rather a weld in over the bolt in stuff.

So thats a basic summary of what I will be aiming for, no idea when it will be done but knowing me, a year or longer lol. Also finding it hard to source quality parts too, no one seems to have them anymore.

So yeah I am well off completion, engine is out and gone, interior is almost out and that's how far I've gotten. Videos HERE and below to show progress with my not so good film production, but hey I'm learning.
Also updates are on my Instagram HERE or my Facebook HERE
@Hayai.build
www.facebook.com/hayaibuild

Any help go ahead and comment, if you also see any parts I maybe interested in let me know

Having trouble uploading the pictures so may need to get a photobucket again. So if you want to check what's happened below are the videos or check above to find the links to my Instagram and Facebook.
Videos so far
Intro
Episode 1
Episode 2
Episode 3
Episode 4 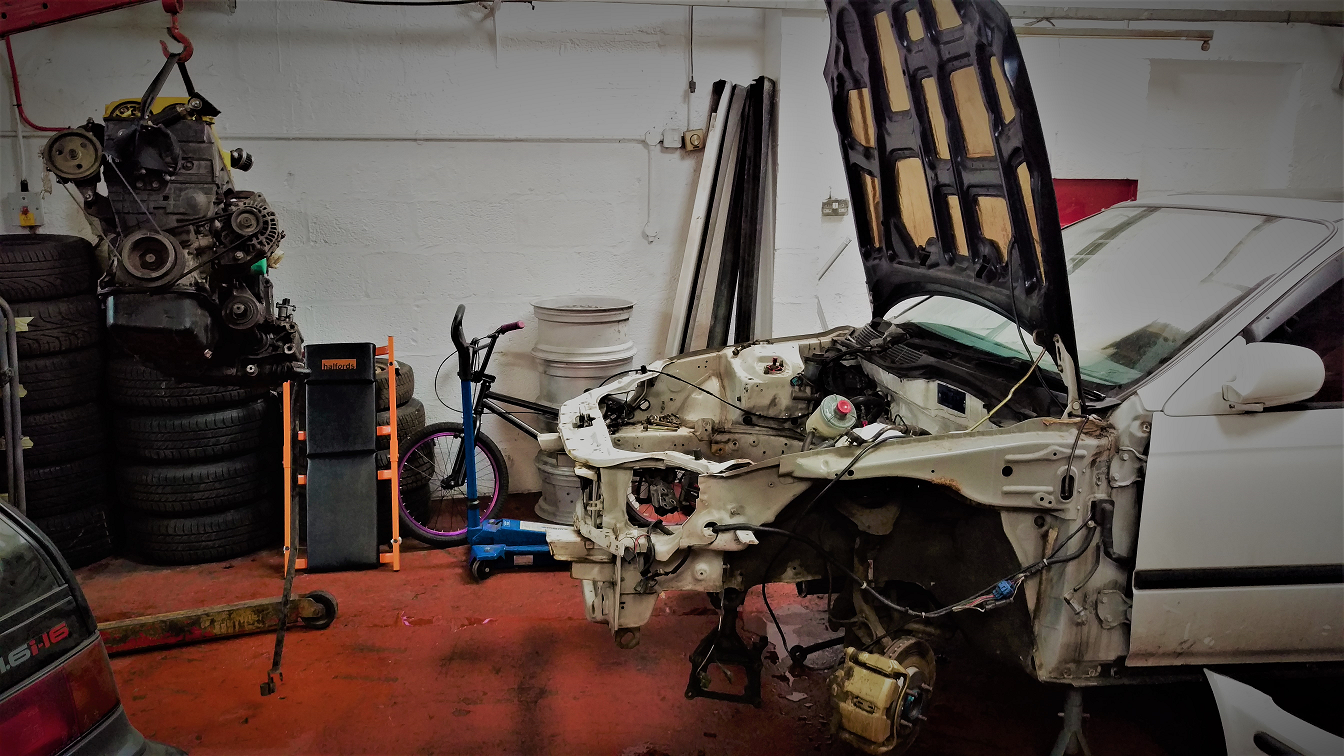 Did pick myself up a nice genuine Bride Japan Edition Zeta 3 with carbon back, just need to find some side mounts for it now but no real rush.

Also to go with my 5 hub swap

SSR Hasemi Pro t-s
16x8 & 16x7.5
Et38 & Et32
Should fit nicely with some 215 rubber
Just need to figure out the colour I want to go for now, originally thought about polished lips, gold split nuts and dark amethyst (ek9 colour) centres but I've had polished lips and dark centre slips before and didnt work well with the white car. These wheels also look ugly in all white so that's a no no even though I like white on white.

Got some interior out -

Got the exhaust off,

Got the shifter out,

And, I've lost interest at this point

The old 3" system is out, will hopefully be going for a 3" titanium next, if you're going to do it once, do it properly.

Rest of the shifter out

My SSRs turned up, in two minds about them right now, can't really test fit them until the 5studs are on. Will be refurbed but colour choice hasn't been decided yet and needs new SSR stickers plus some chunky 215 advans, has brand new nankangs and budgets on right now but with the power I'm hoping to put down I would not trust my life with Nankangs ever again, used to spin and slide using them before with the B18.

And, I did some more stripping of the interior, needs a real good clean up and probably fresh paint, I will be putting the carpet back in sinc ethe car will be daily driven but I don't want to be half assed with this rebuild hence why I will clean it up and paint before I lay the carpet. Might use audio carpet too to keep the road noise down, the oem ek4 carpet doesn't do such a good job.

Eventually got the Xbrace out as well as other stuff

Got some pics from the last time I was at the unit.
So the wheels, still undecided on the colour combo but now after playing on Need For Speed, desert sage metallic centres looks and sounds appealing. 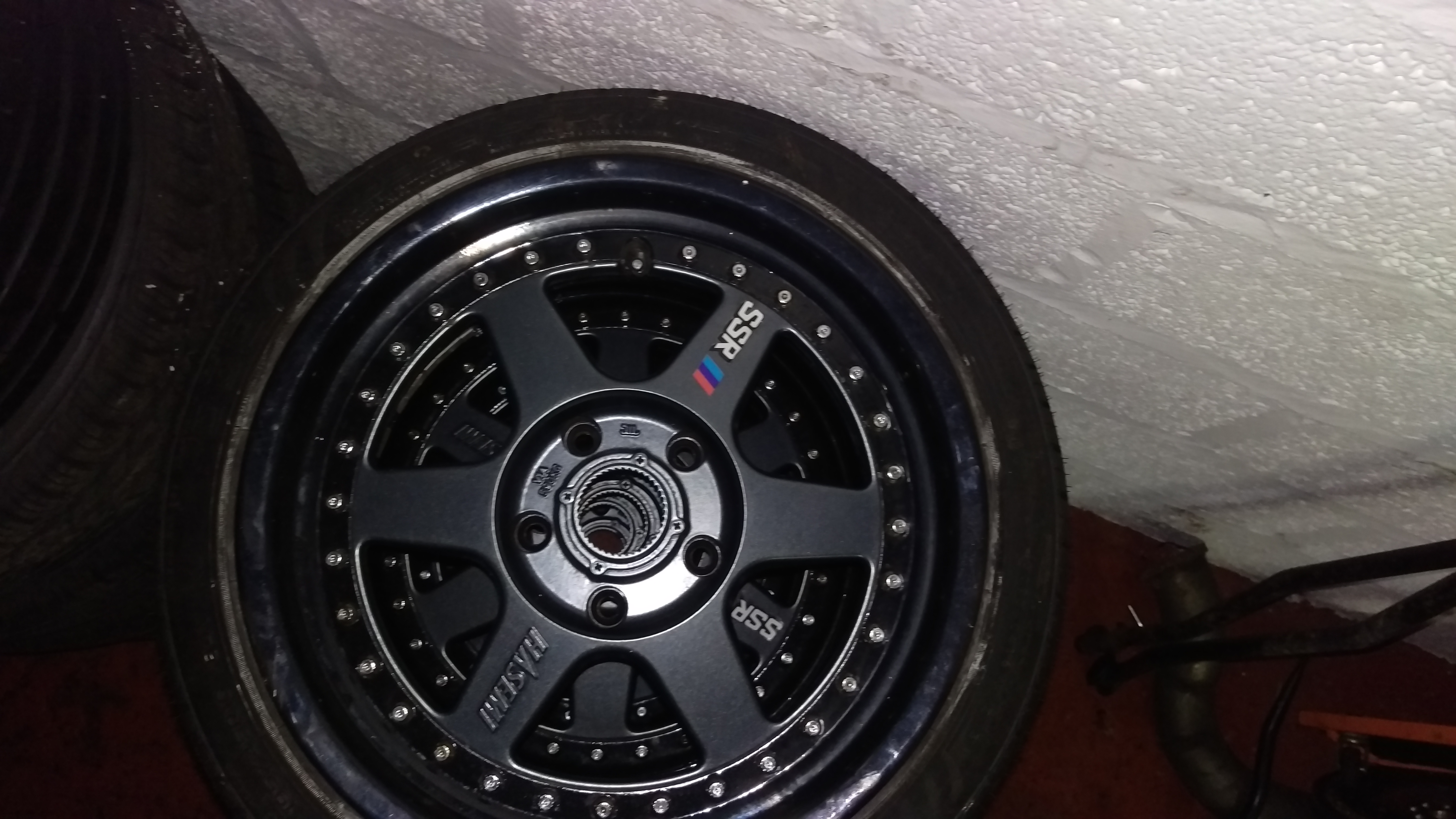 Picked up these side mounts for the Bride seat, was told they would fit but they don't and looking like they need spacers to fit the floor rails, asked around and everyone said it should be safe as long as it's quality hardware which I definitely will be using. 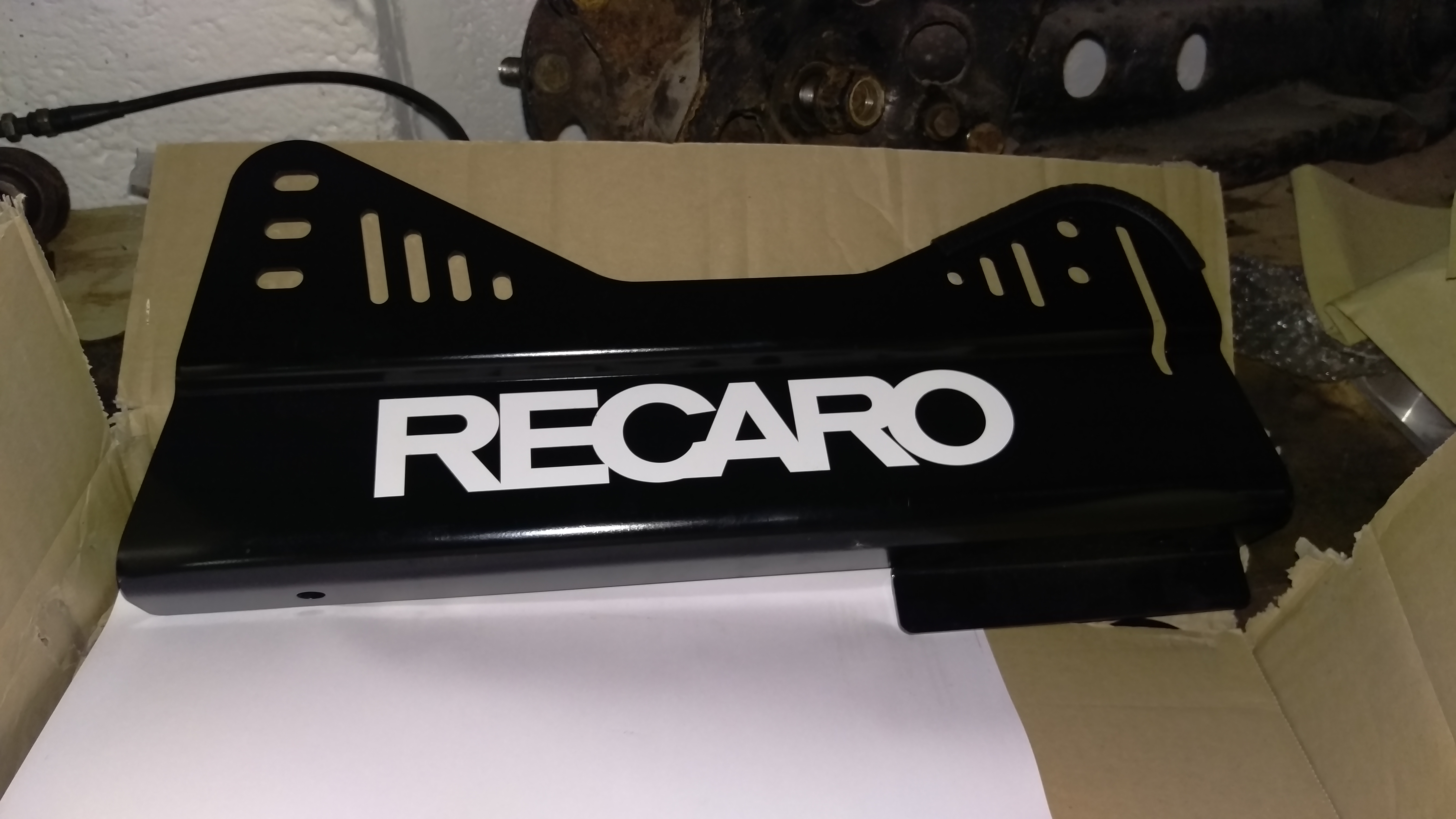 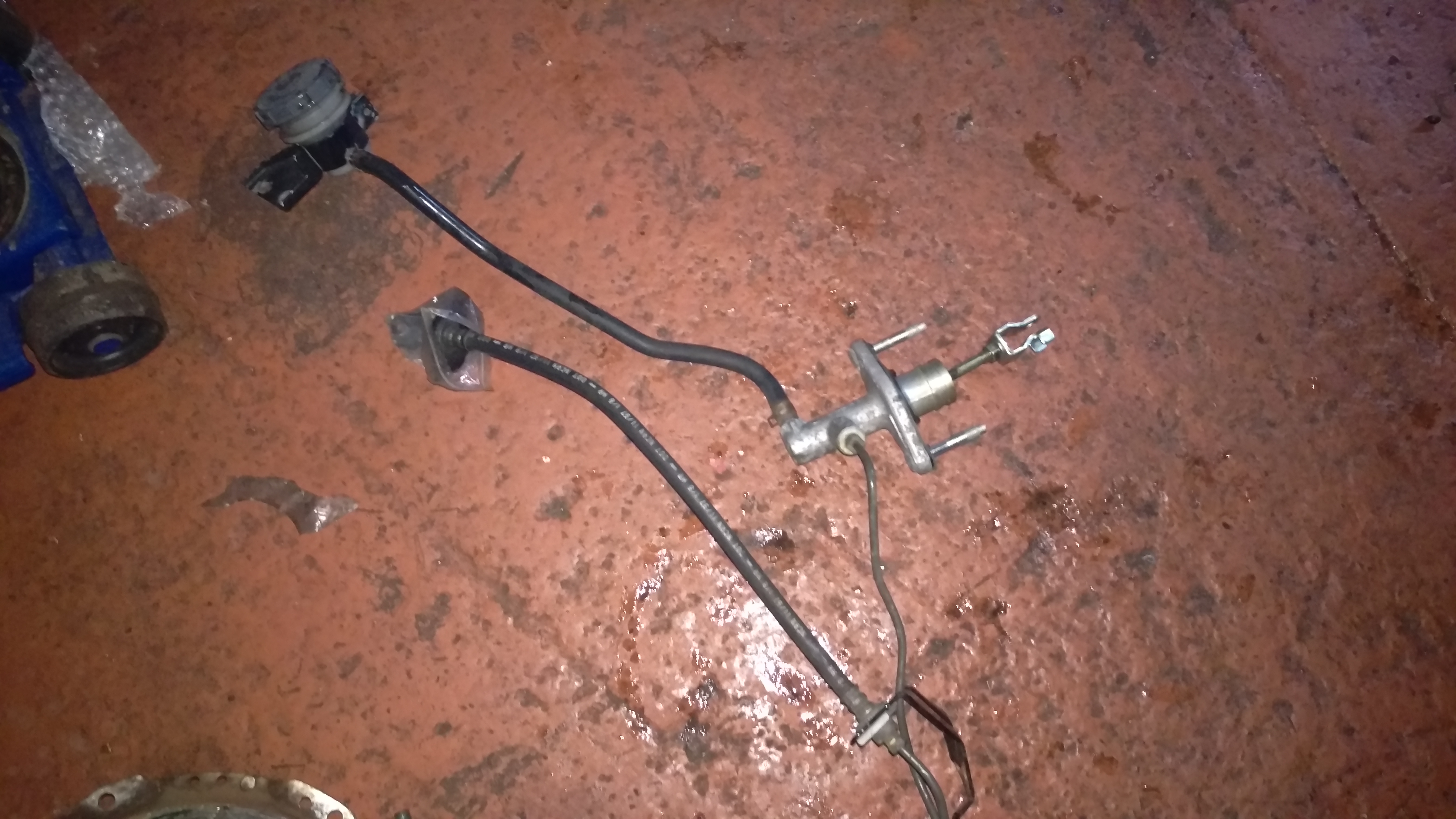 Bay is now completely empty apart from a few brake lines and fuel lines but everything else is gone including the headlight looms which will be tidied up eventually. 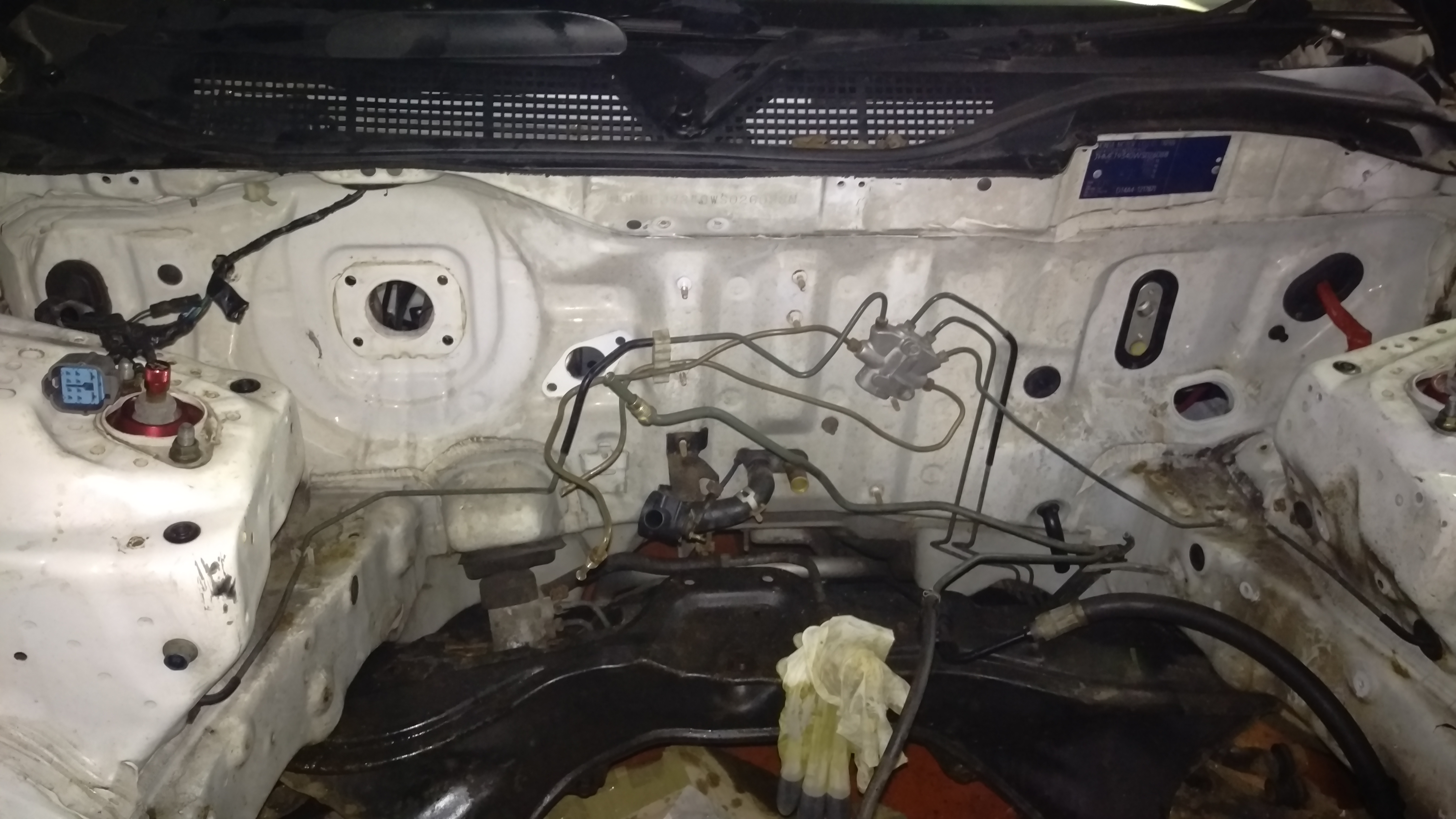 So, just had a stupid idea
Why not boost it ?

I've thought about this because, I'm rebuilding the bottom end with new pistons bore etc so could throw in some low comp pistons instead of high comp, ITBs are looking at around £1200+, well drag cartel ones are and I'm sure I can peace together a turbo kit for something similar priced.
I was aiming for 300 n/a but why not have that or more boosted with more torque. 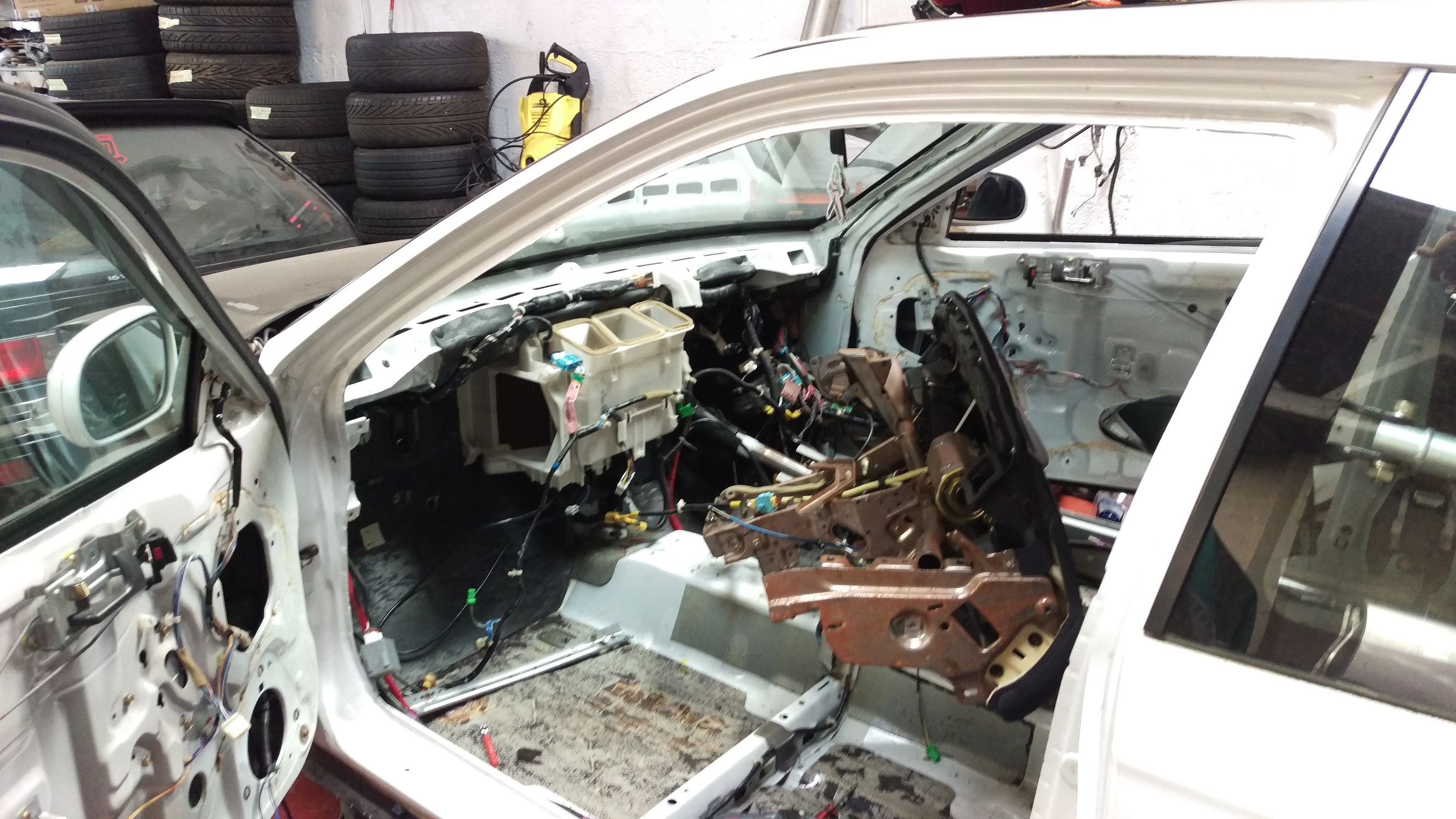 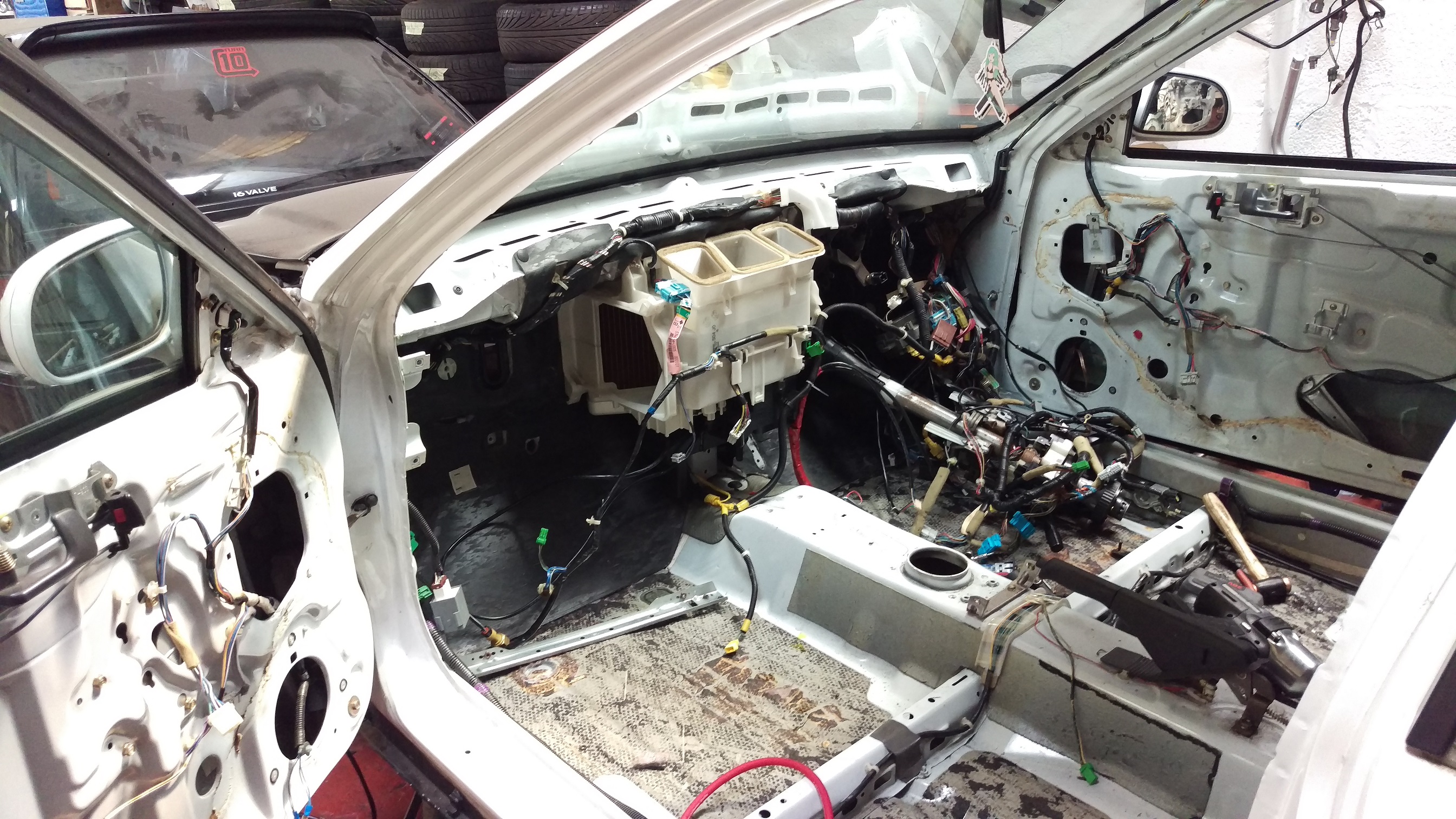 So let's start off with the bad. It has more rust than I expected. 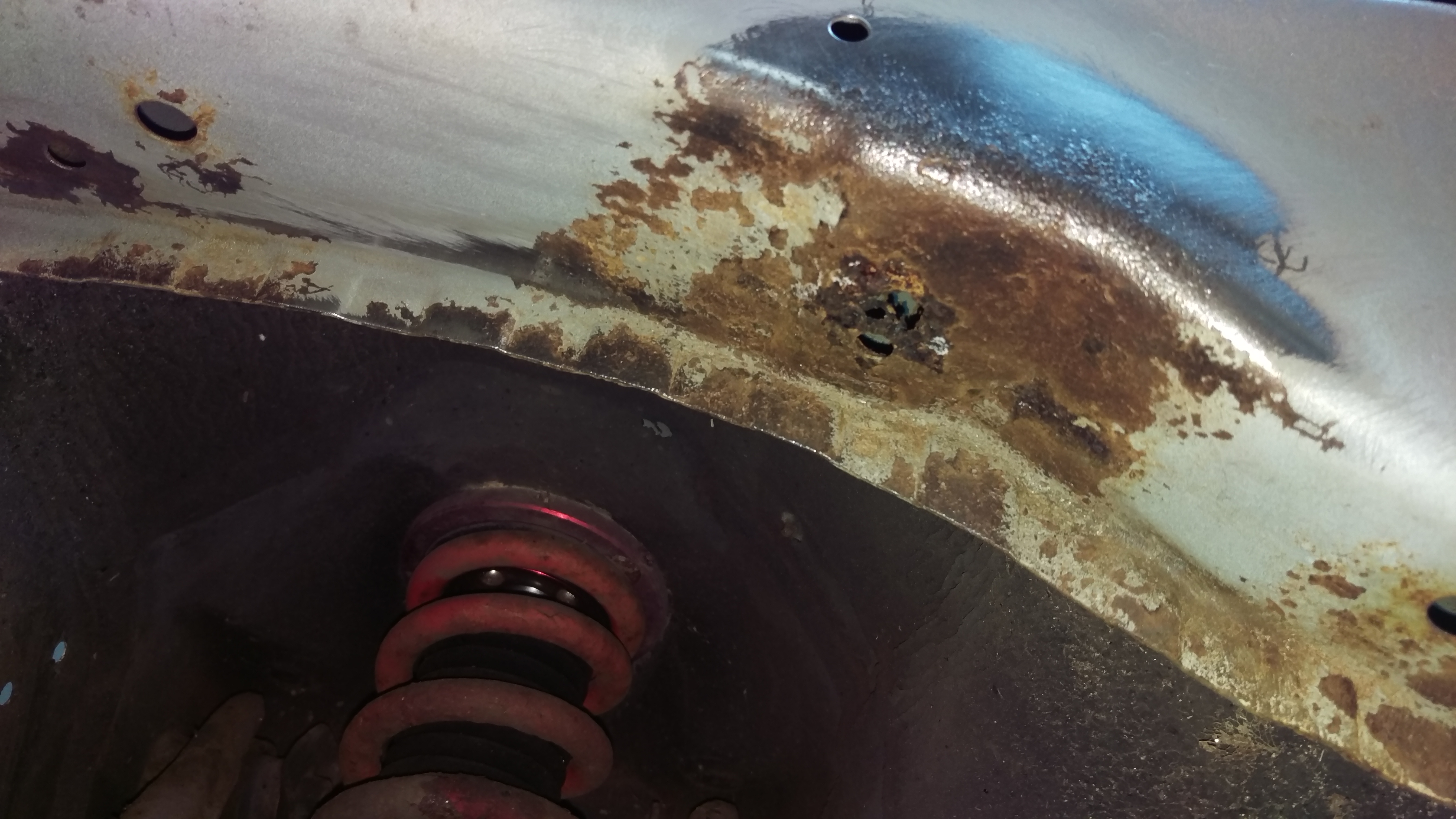 I was wire wheelings down the surface and came across a hole, put a screw driver straight through it so looks like we might have to cut and plate it up.

Did wire wheeling in different areas to see what might needs addressing, front slam panel will definitely need replacing, either with an oem replacement or tube front but I don't see the need in a tubed front at all other than it will look cool. 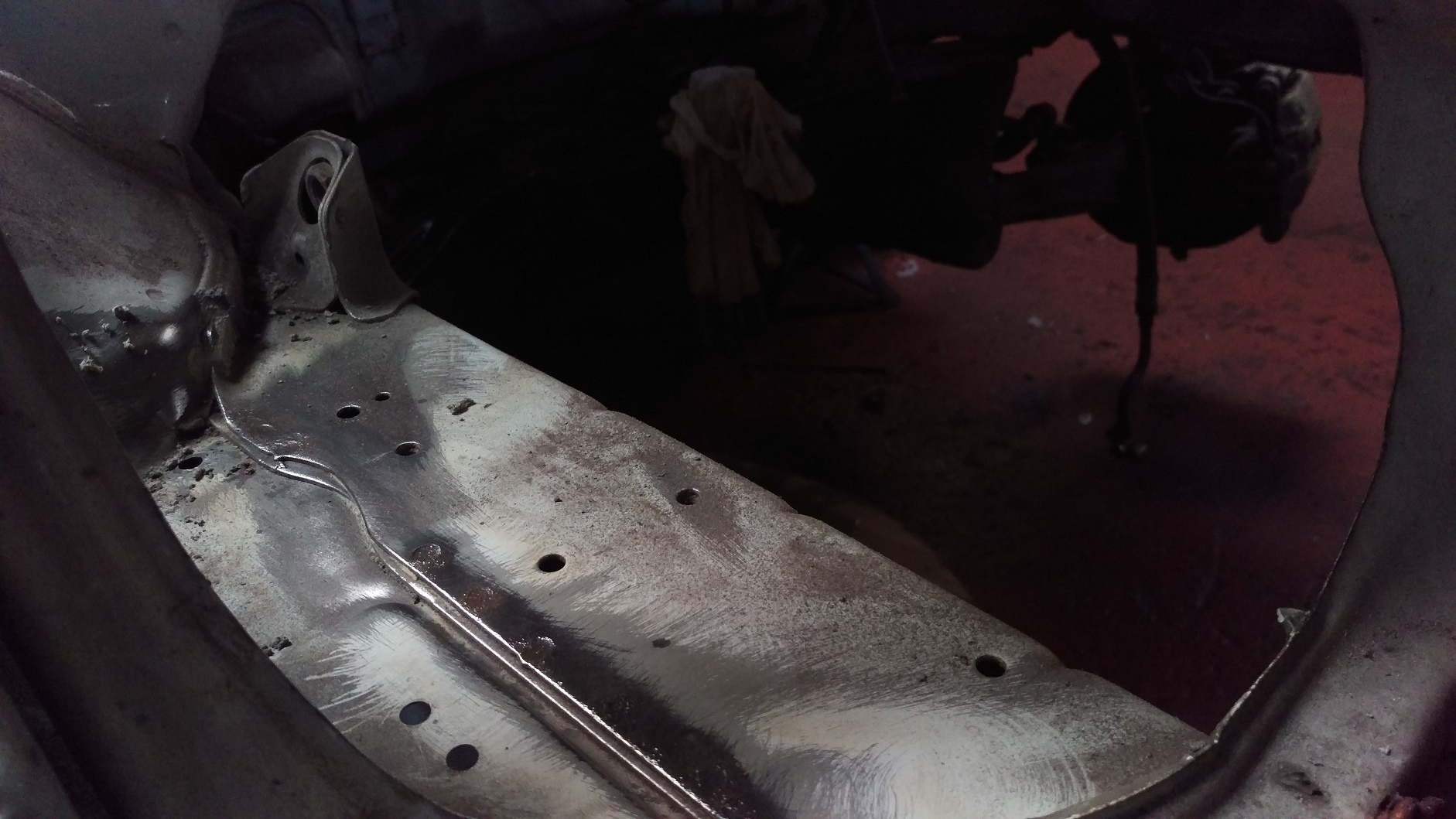 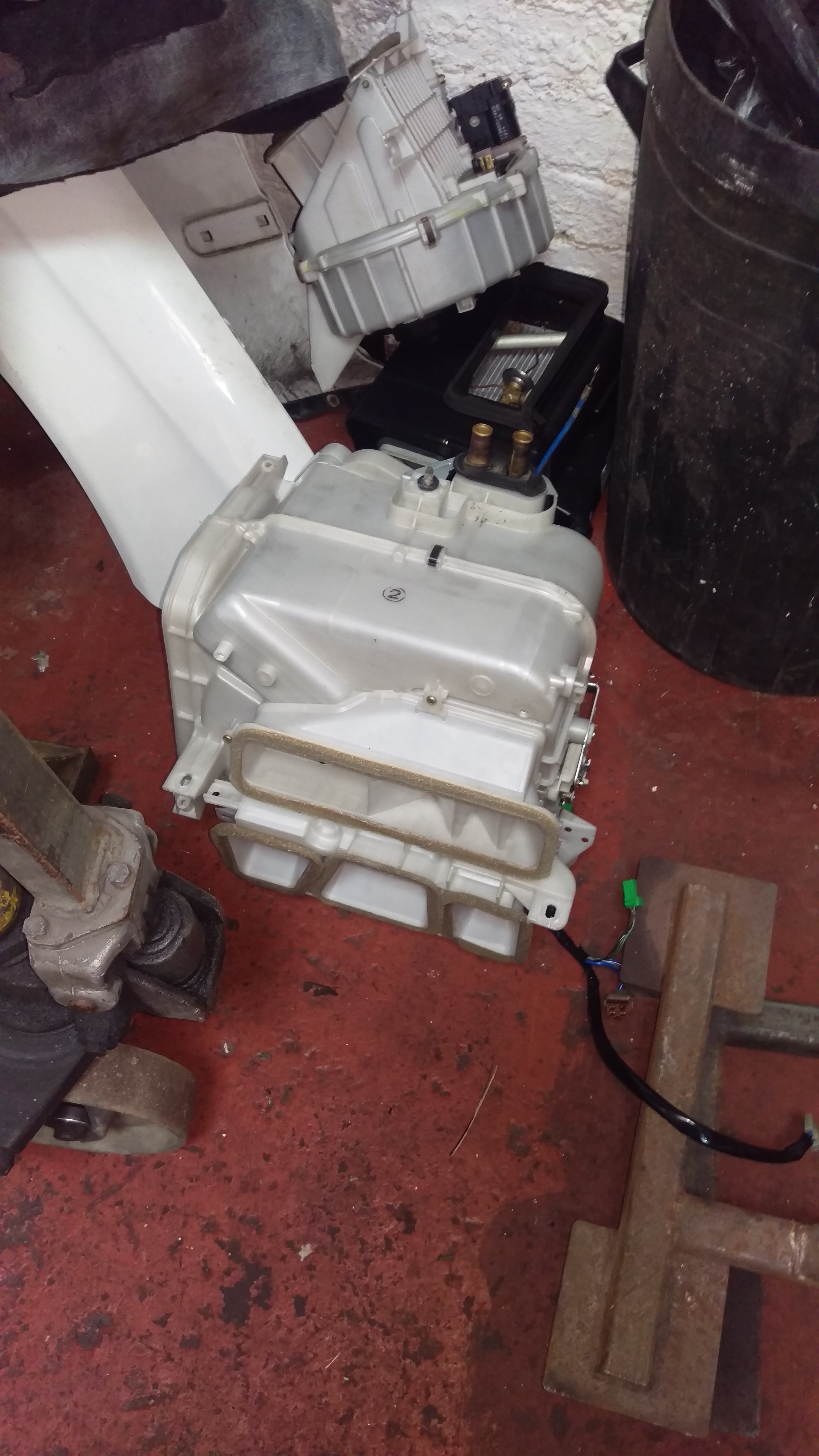 Fire proofing is also out, some more weight loss I guess and will in theory warm up the inside of the car quicker in the winter from the engine temps haha 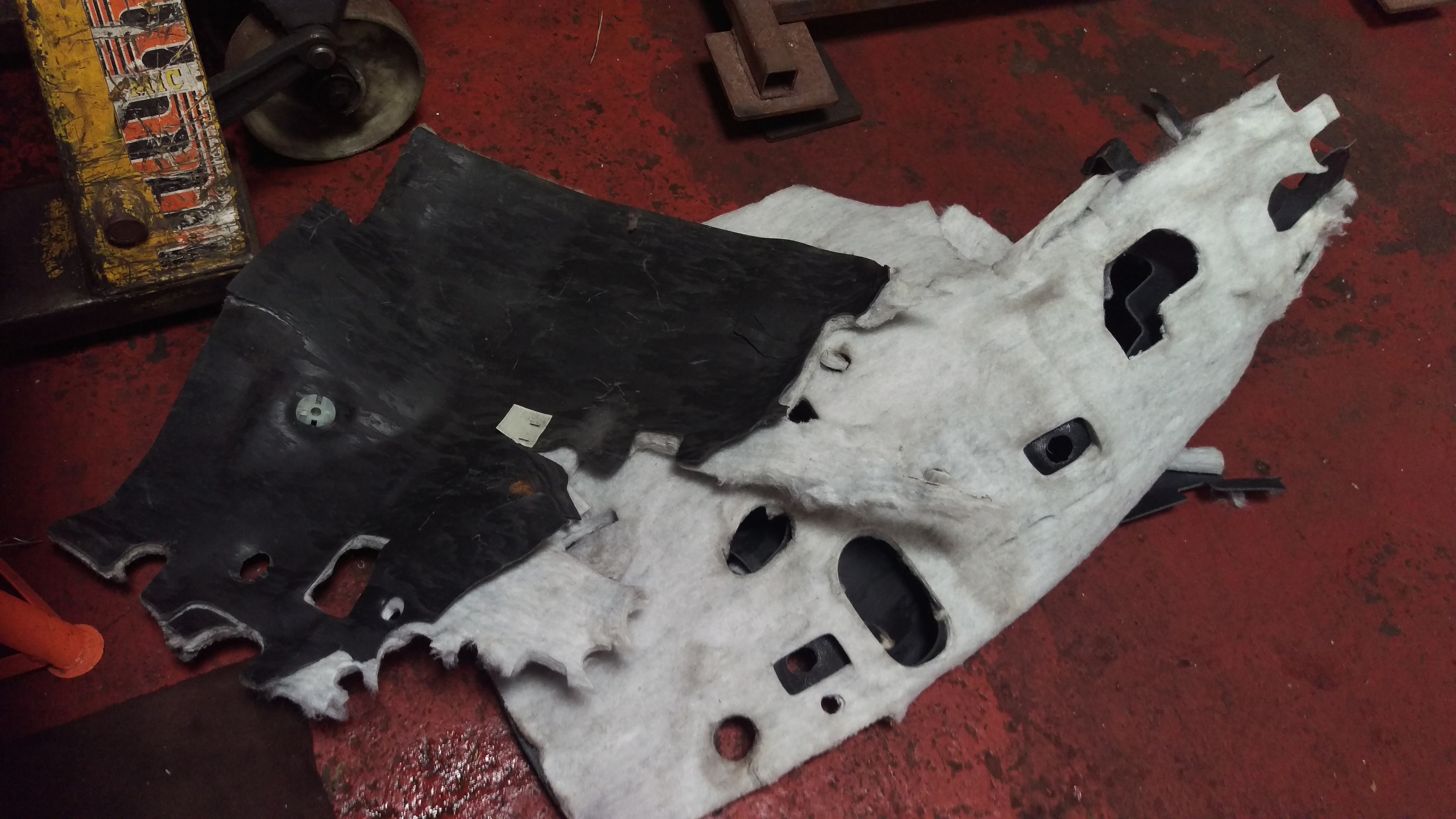 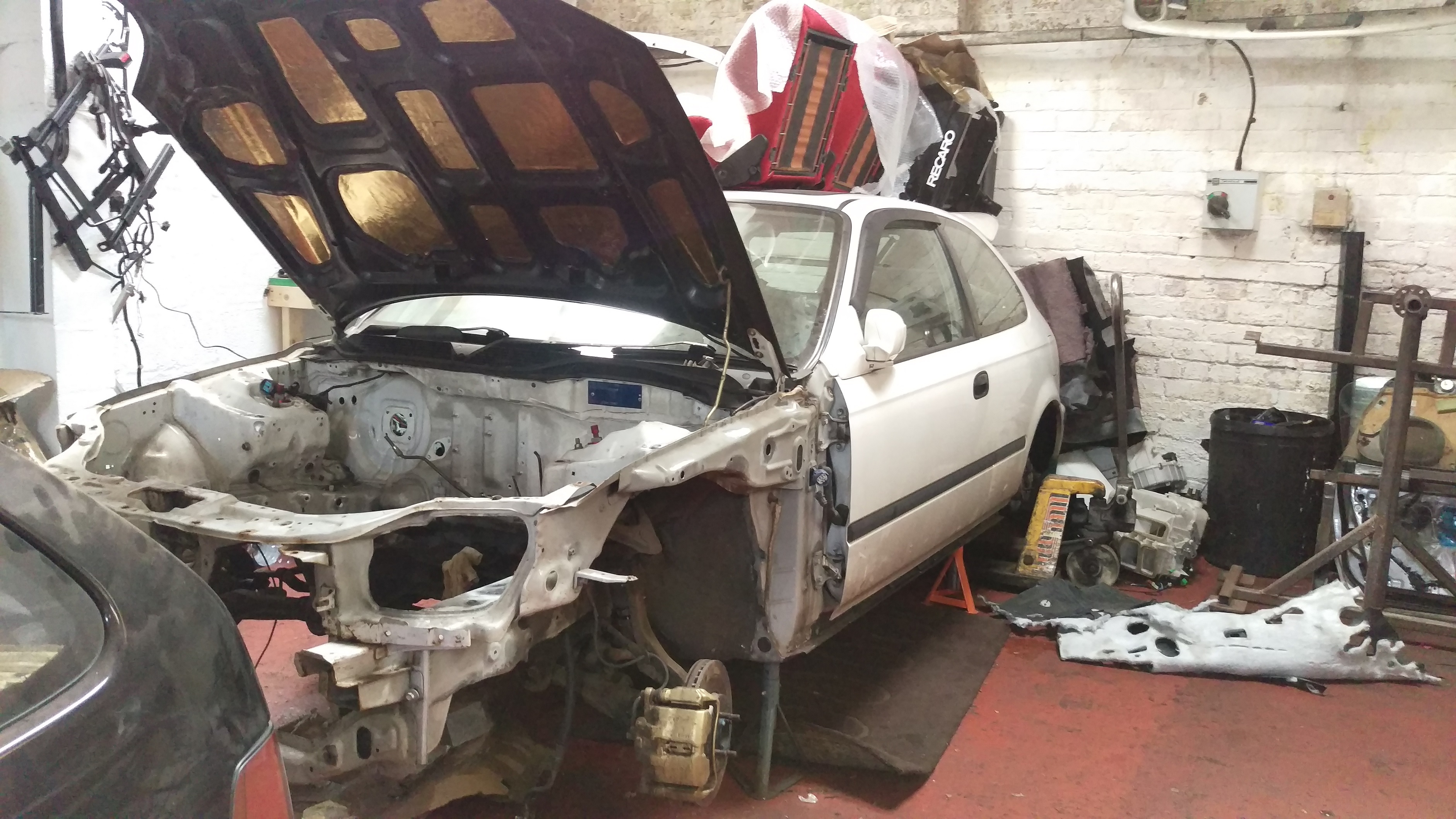 If your only looking for 300-350 i wouldnt even bother building it, 7psi ish with a decent turbo setup and your good to go on all stock components. Just a clutch.

TheBooosh...! said:
If your only looking for 300-350 i wouldnt even bother building it, 7psi ish with a decent turbo setup and your good to go on all stock components. Just a clutch.
Click to expand...

I was reading the K24 rods are a weak point, plus I want to get new pistons and rings for peace of mind, I don't want a smokey engine. I think I've decided against boost just because something will go wrong, everyone has issues with boosted Hondas eventually.