Firstly sorry if this is not allowed, i am not sure on the rules for this as don’t think I’ve ever seen it done before on here? But if it’s not allowed then a mod can delete the thread or let me know and I’ll remove it.

I am just trying to gauge interest/feedback on an idea I have for selling my car (pre facelift Ek9).

I was thinking about running a raffle to sell my car rather than a normal sale as it needs a bit of work done to it however the car is mechanically sound and I currently use it as a daily with no issues what so ever.

The reason I am thinking of a raffle is that the bodywork is not in great condition after it being parked up in a garage for over 3 years due to a change personal circumstances (2 kids and and 2 new homes in this period lol). And I know people probably wouldn’t want to pay like 5k for a car that probably needs a fair bit of cash thrown at the bodywork. It’s mainly the arches but a couple of other little bits here and there. So I thought if I raffled the car off people would have the chance of winning the car for the price of a ticket and then be able to throw some money to bring it back up to standard. You’d then have a car worth a whole lot more than you paid for it. I was thinking like minimum 50 tickets at £100 or 100 tickets at £50. Does this sound reasonable?

I got it back on the road in December at the cost of over £1700, new pads and discs, callipers refurbished, timing belt, tensioner, water pump etc also had it fully under sealed with upol raptor coating, (I have it all listed somewhere). The work was carried out by Gerry at performance tek, In fact just about all the work done on the car has been done by Gerry since I bought the car back in 2010 (I am the only uk owner of the car since import). Anything it’s ever needed has always been done as soon as I was made aware of it and have receipts/invoices for the work.

The car actually had a full exterior respray done back in 2012 at a cost of over £2k however the parking it up in a non heated garage has caused the arches to get the dreaded rust.

There is a build thread on here of things I have done to the car over the years, nothing exciting really. The only real modification I have done to the car is a Tegiwa whales ***** induction kit. However it did come with a couple of nice extras which weren’t know about until after I bought the car and start going over it like a spoon ecu and street silencer back box. It may have more done to it but I wouldn’t know what to look for from an engine point of view.

It’s just a thought I had but not sure if it would gather any interest whatsoever, what do you guys think? Or should I just punt it on eBay and see what interest I get there?

I would obviously get pics of the car etc but like I say just trying to gauge interest/feedback on the idea?

Nooo the raffle idea is great and becoming very popular, seller gets the full amount and buyer pays less. However you'd probably need to put it on Facebook for enough interest and attention really. You'd most likely get spammed with messages so will have to track every payment haha.
Easiest way definitely via eBay listing and seeing what messages come through first

It’s not 100% mate but just seeing what interest would be as would want it to go to someone who is going to look after it. It’s just annoying me at the minute every time I wash it and see these things wrong with it and I know at this point in time I don’t have the time or the cash to bring the car back to where I want it to be.

Yeah I am not on Facebook as can’t be bothered with it so it’s maybe easier just for me to put it on eBay and take it from there.

pics of the car and issues??

Its a shame you can't keep/store it, these are going the same way 205Gti's, Renault 5's, old fords hot hatches etc are - Only up in value. They are a great investment in the long term, esp as the US market is opening up to them, which will create a shortage and bump up international prices

aleksboch said:
pics of the car and issues??
Click to expand...

I’ll try get some pictures up of the car as soon as I can but the main issues are the rear arches. Personally I think they should be cut out and replaced but I am no expert. The front lip is also cracked due to parking with an extremely large kerb

, wheels need a good refurb but that’s not a big or expensive job.

gwailo said:
Its a shame you can't keep/store it, these are going the same way 205Gti's, Renault 5's, old fords hot hatches etc are - Only up in value. They are a great investment in the long term, esp as the US market is opening up to them, which will create a shortage and bump up international prices
Click to expand...

Yeah it is a shame although to be fair I could now keep the car as I have moved into a new build house and I have an internal garage which is totally free from moisture unlike the old garage it was stored in. I just don’t know when if ever I would get round to restoring it properly and it would be a waste to just let it sit and rot when someone could enjoy it...

Yeah I know what you mean and where your coming from, like I said to Pete I am not 100% on the idea but if I got enough interest I would maybe run with it. I wouldn’t want to be giving the car away but if I felt I was getting a fair offer for it in respect of what the car can be/will be worth then i would have to think about it. Having two kids bleeding you dry doesn’t help either

More than happy to keep it running and take it out for a good drive for you mate haha but yeah the issues you list aren't mechanically related then right? The rust is a typical problem, my brother just had his rear arches done. Cut out then replace with a new piece. As Gwailo said it wouldn't cost anything to store it and the USA folks are paying a pretty penny for these! Be a shame to see it go to a bad home, being as you're its only UK owner!

nah no mechanical issues at all, all cosmetic issues. Yeah it’s a pretty common problem with the civics. Ah out of interest how much did it cost your brother for that work? So what your telling me is I should just sell directly to the American market

Here is some pics sorry not the best light and it’s a camera phone, plus I am **** at taking pictures, need Rippu to take photos lol, for some reason it won’t let me post the passenger side full pic as to big even though it was taken the same as the others, I don’t get that!

I think, if I remember right, it was in the region of 800-900 fully welded and painted. Just looking at your pictures, it's really not that bad at all. Hardly looks like much damage or rust at all. You should've seen my brothers, both side bubbled up and sills falling apart. Very minor cosmetic issues there mate! damn wish you were down this way and not so far north lol
Sweet garage btw mate!

Was that for both sides? I’d prefer to get both done. Passenger side isn’t actually bad but better getting both done. Ha yeah it would be cool if I was much closer to you guys as I would defo be up for coming to meets etc but it’s really not doable being based up here

ha yeah thanks it’s the main reason I wanted this house for the big double garage.

Yes both sides mate, it's typically done as a pair so that it matches on each side and then blended into the door etc. The piece comes as a rear quarter template and is welded in. Make sure you get a good quality piece, oem original would be nice. Yeah mate you're miles away!! would be great to get a members meet for everyone near or far but it'd be just so difficult and a heck of a long drive lol

That’s actually pretty reasonable, fairly sure someone said to me it would be like double that. Will maybe check in with local garages and see what they quote me. I didn’t think it was possible to still get original oem Honda rear quarters? Yeah think Rippu said it was like 6 hours on a good day for him to get home (his family stay in Edinburgh)

Around 1k is what I've heard from others too. Best thing to do is take as many pictures you can, and send a message to various reputable places for quotes. Even local or not local, just to get an average price. Umm I'm not sure actually, don't quote me on it! Haha yeah you'll have to come down with him next time but then somehow get back damn lol

Yeah I contacted a body shop which usually deals with high end cars like lambos etc and they asked for pic etc to give me a price but I forgot all about it. Will need to try get some pics at the weekend and send them off see what ridiculous range I get, I reckon anywhere from 1k to 2.5k depending on who actually wants the job/isn’t a rip off. I’ve seen a few places selling rear quarters but none of them original and they vary in price quite a lot but no idea about the quality and it’s all mailorder so bit of a problem

For those of you who asked here are some pic of interior and bay. The car is missing the drivers side mat and it has been like this since I owned it. Been unlucky on a few auctions when trying to buy a set. Also note that I switched the drivers seat and passenger seat round as the bolster in the original drivers seat has gone and needs replaced. I bought new seats out of an ep3 to replace them but they felt to heavy and just sold them as always intended on buying better original seats or getting mine recovered. Any questions just shout. Also the seats don’t have dark marks on them that’s just the lighting in my garage causing that. The spare wheel is an original Ek9 alloy that I bought rather than having a space saver. You can also see it’s got the original flare aswell and also found a spare one in the car. Oh and the stereo headunit is brand new I just bought it two months ago. 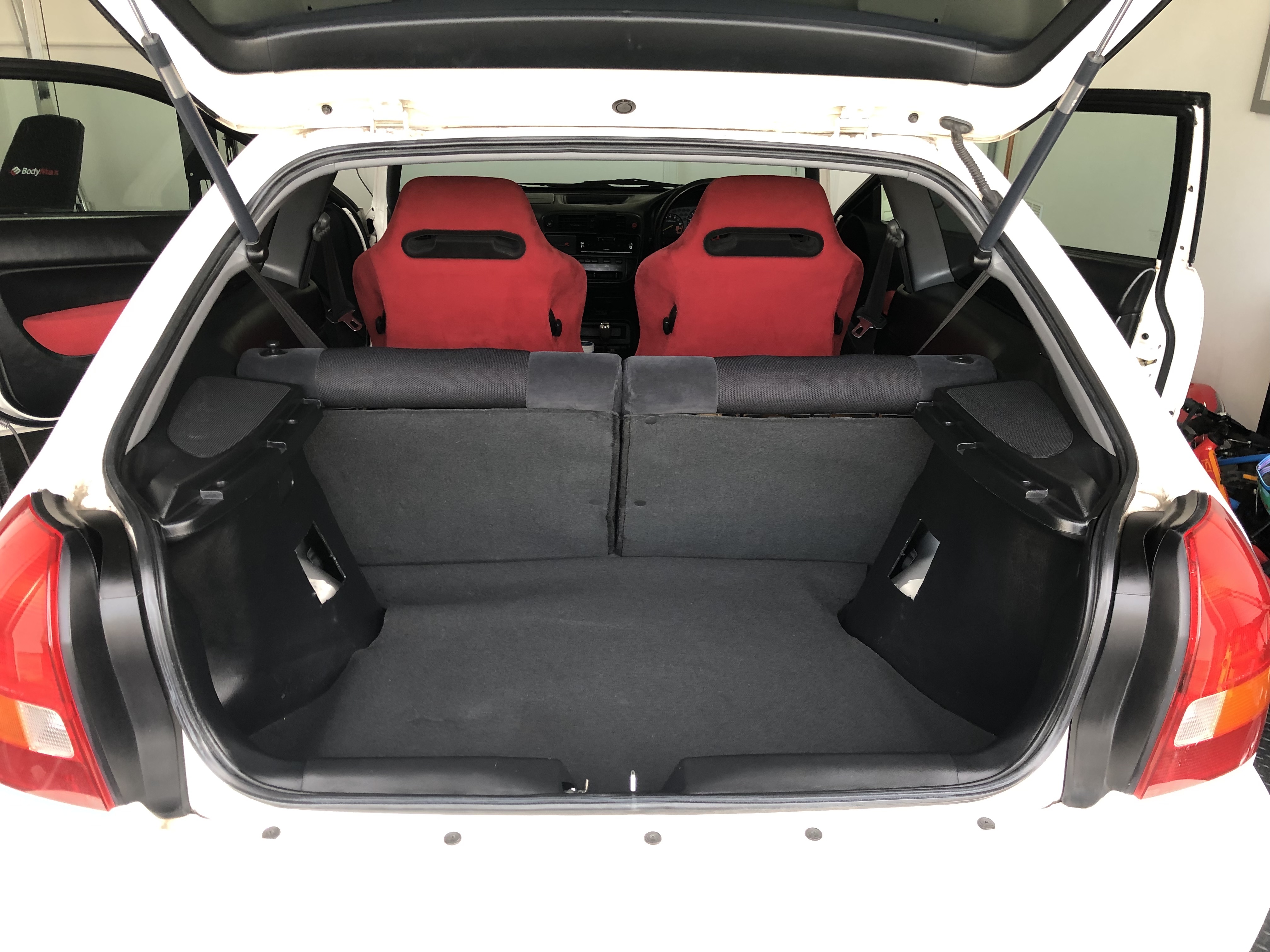 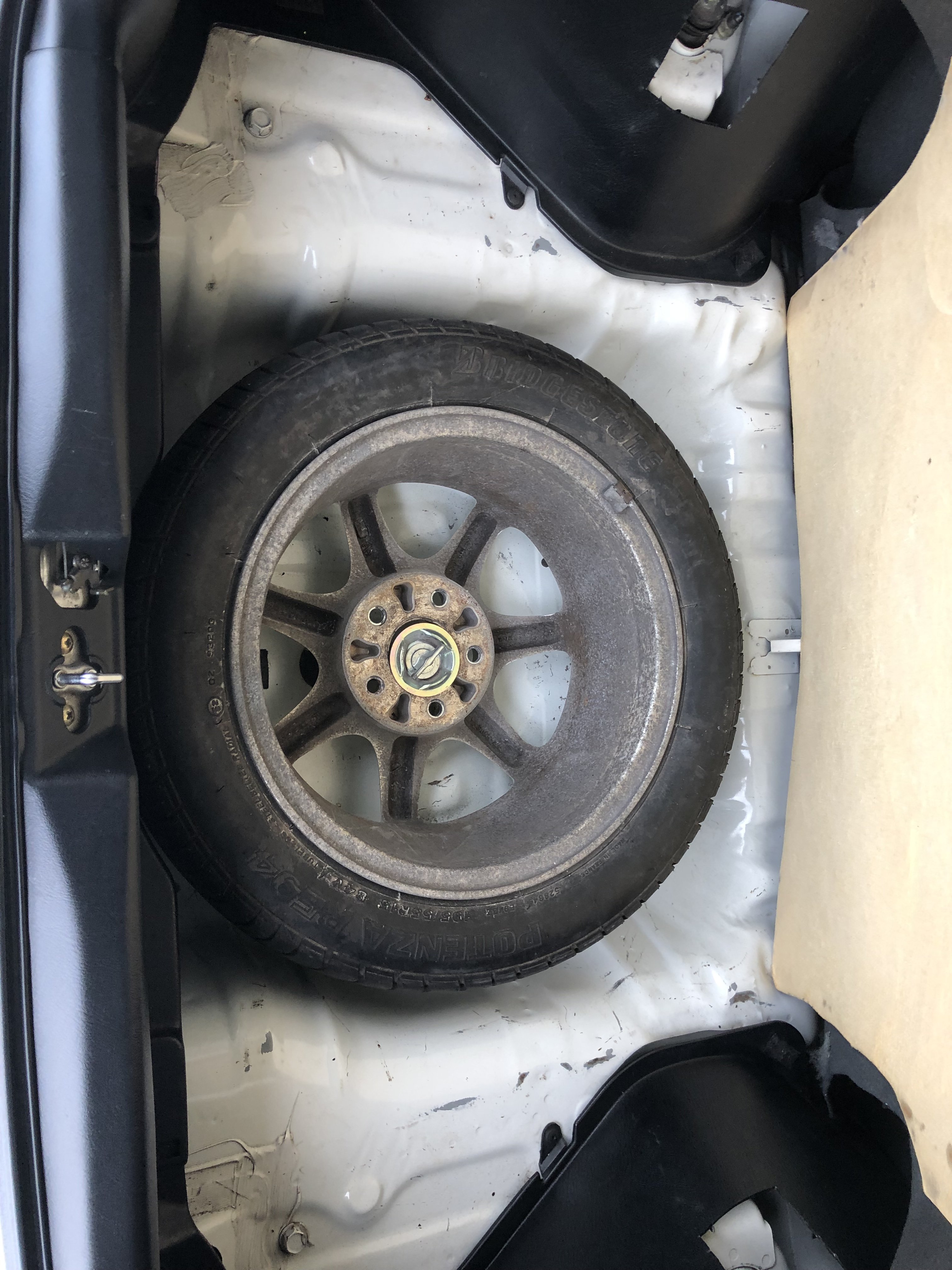 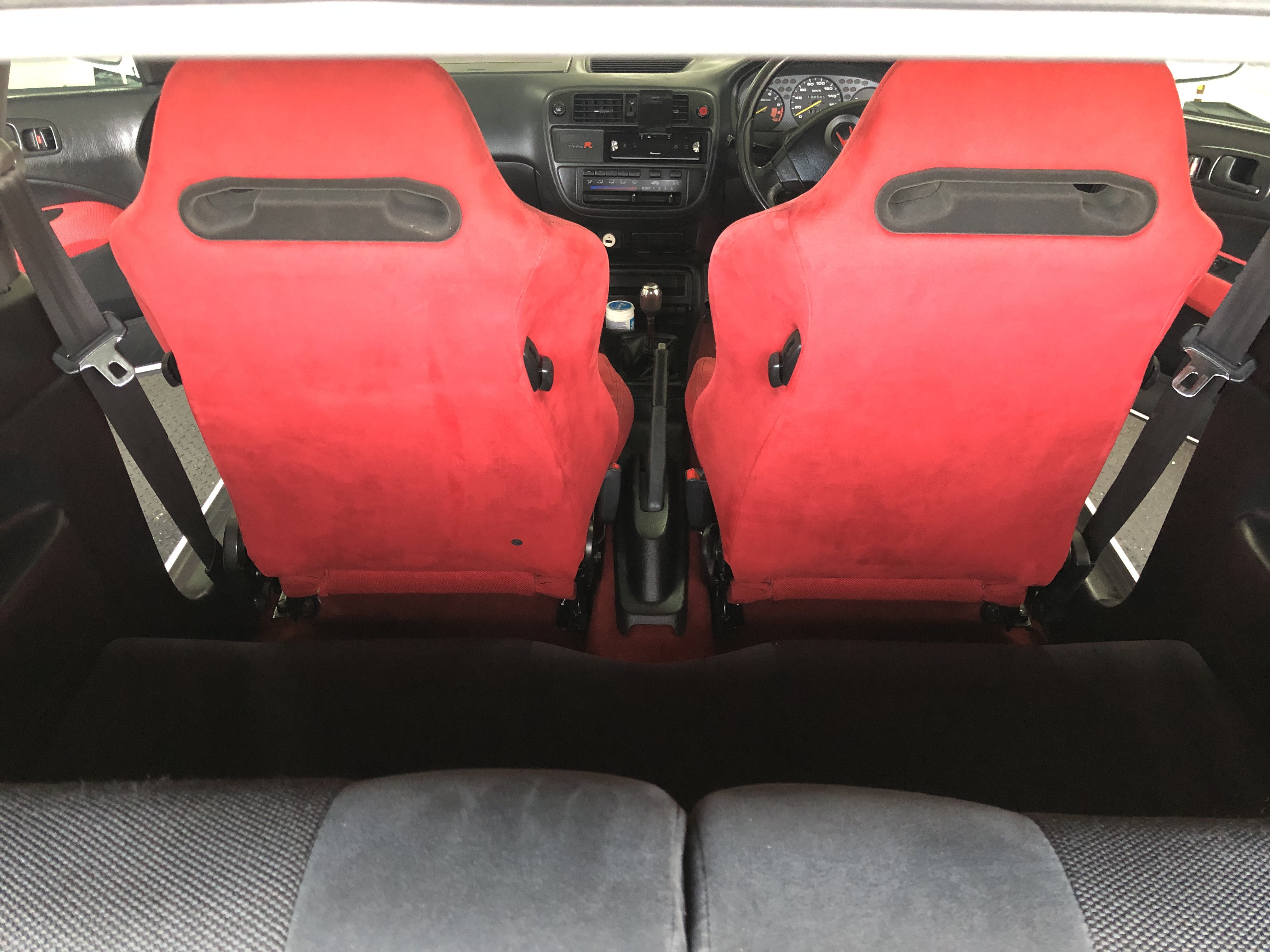 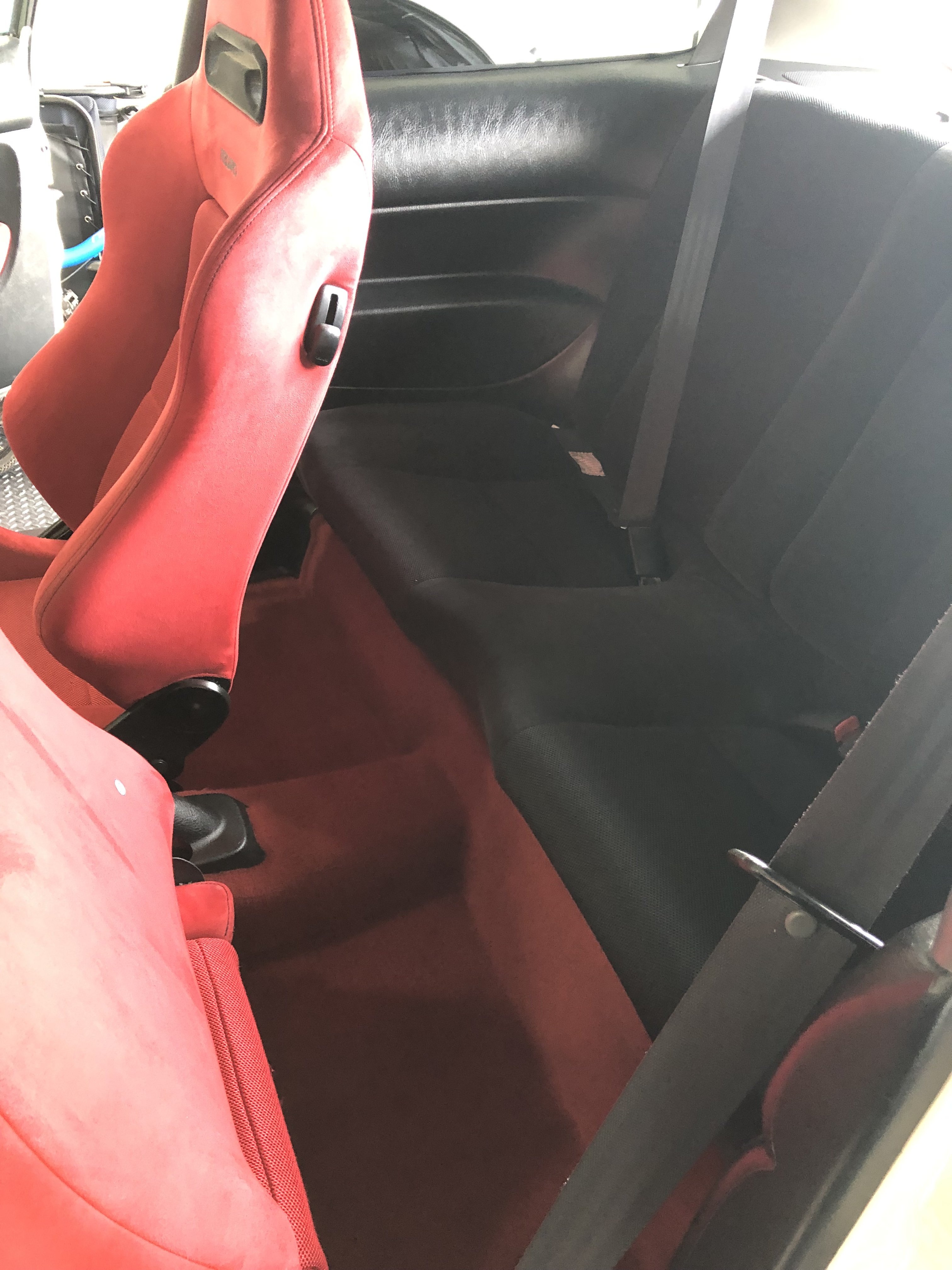 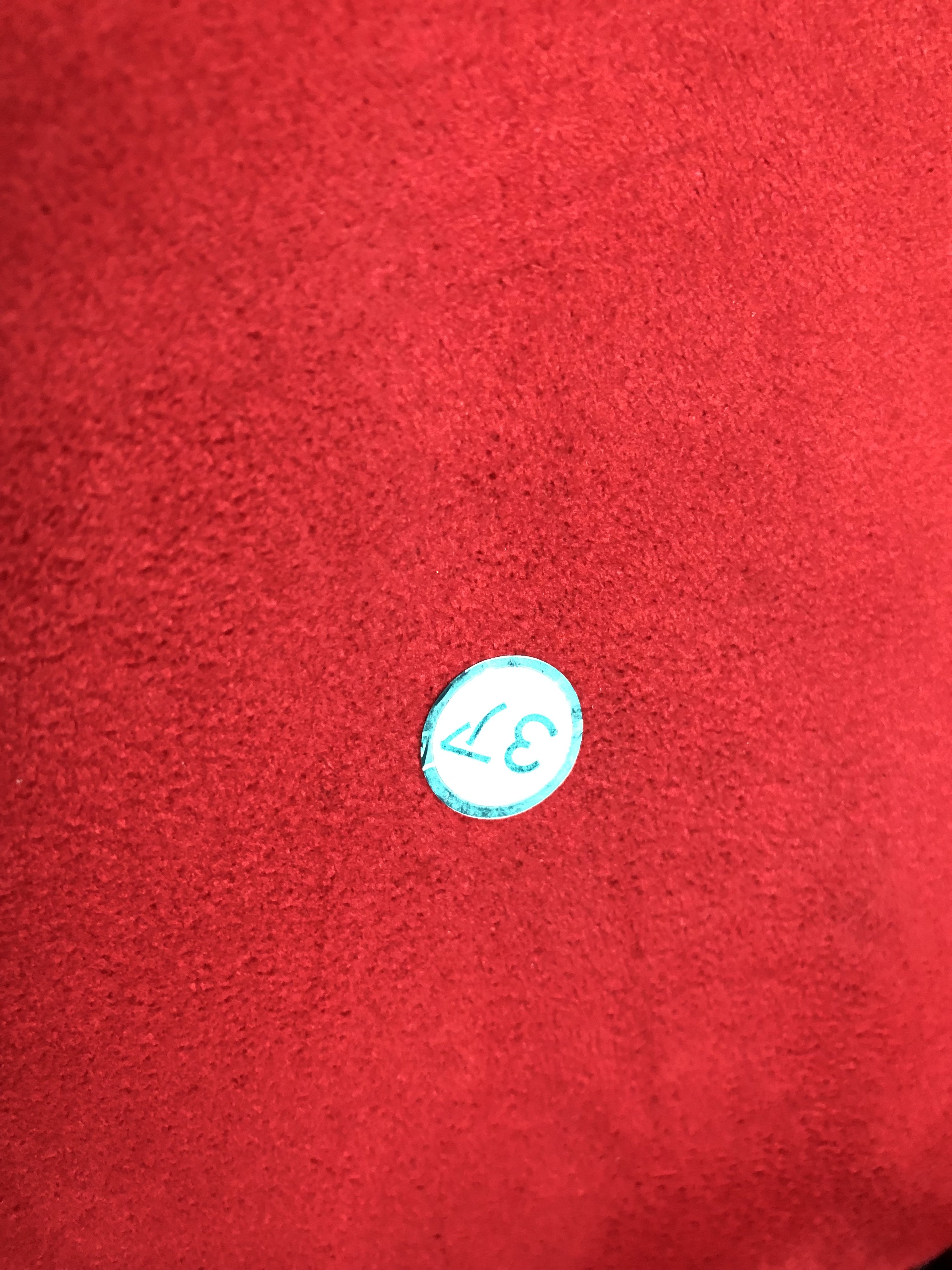 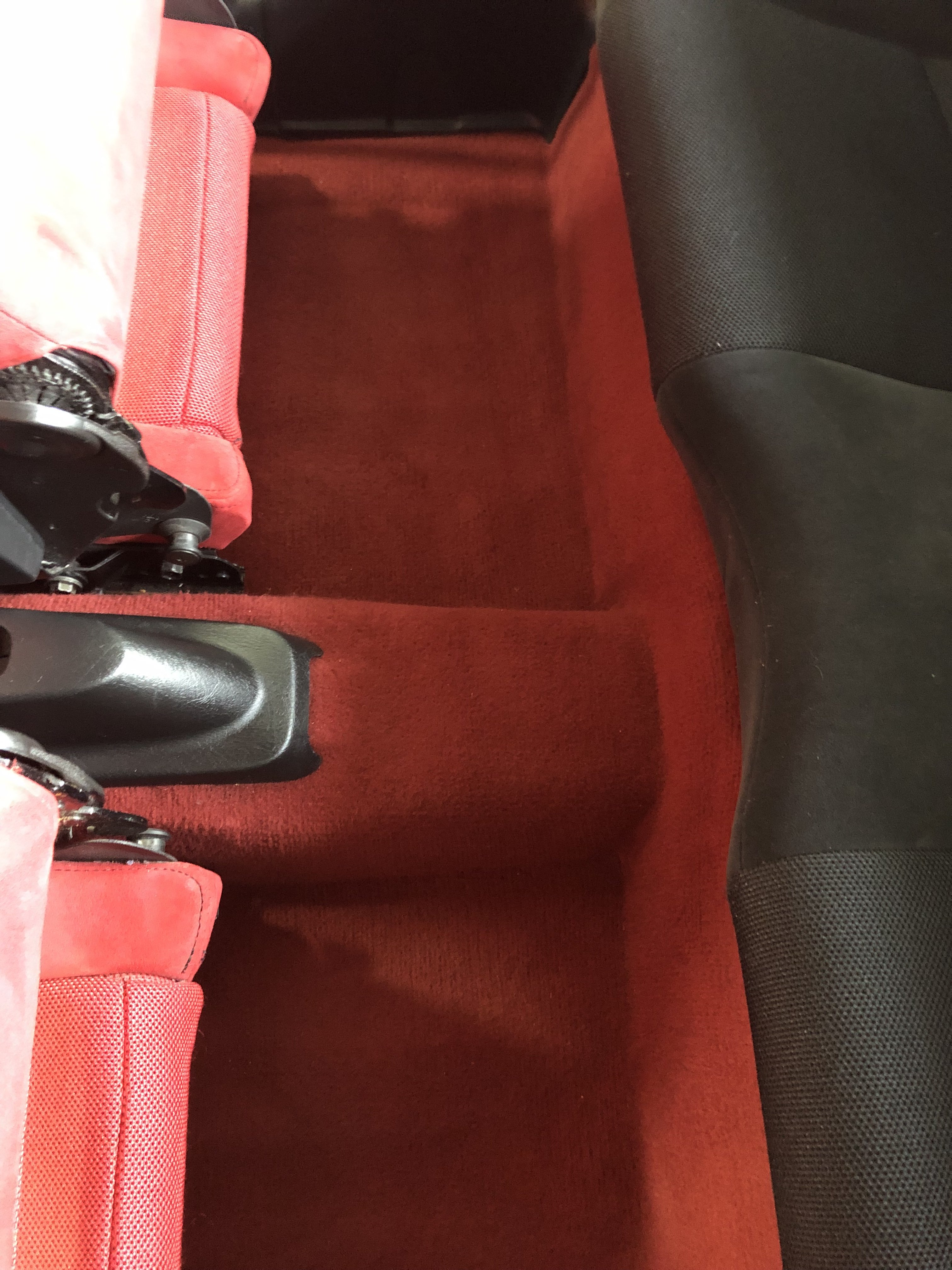 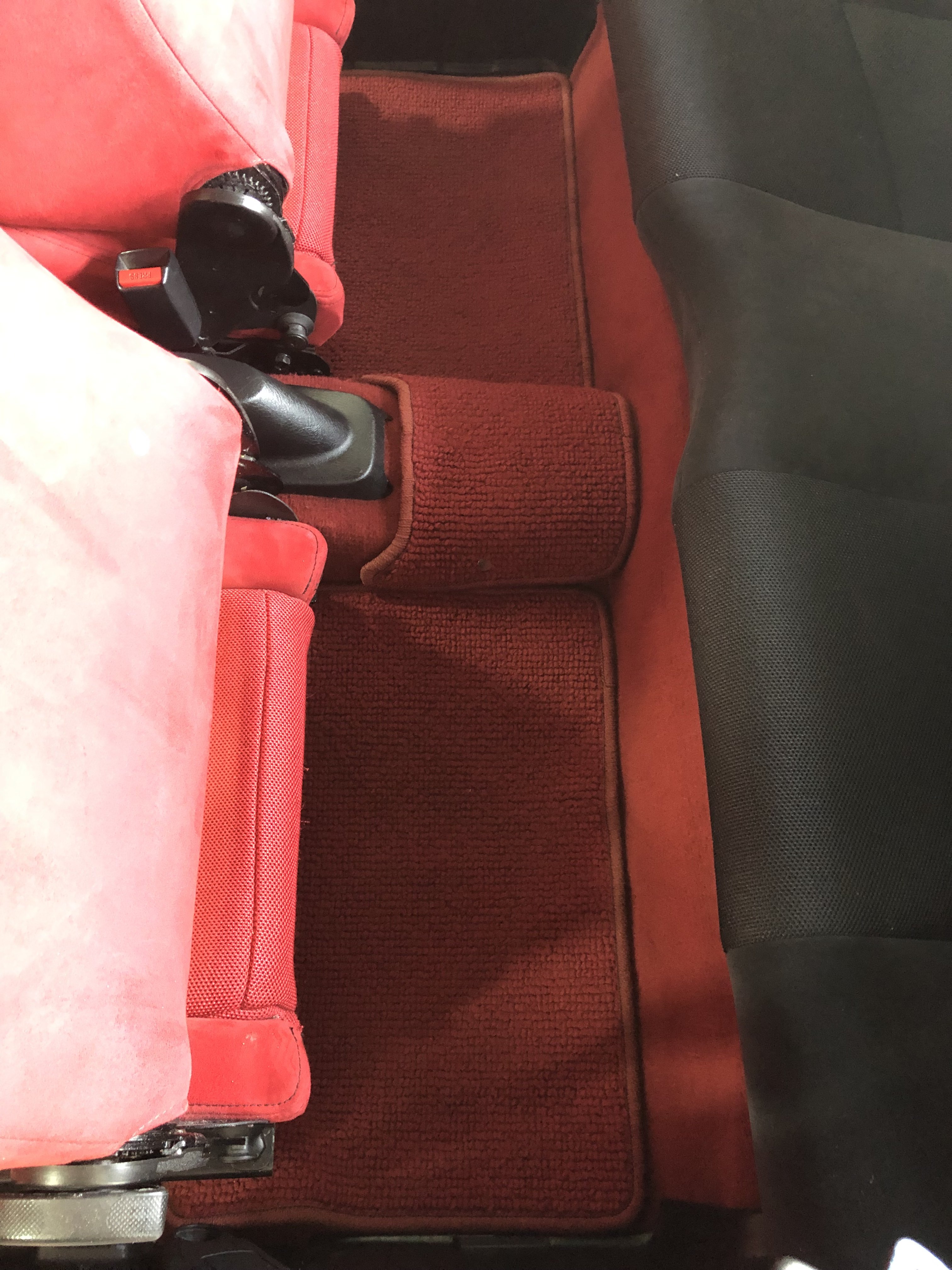 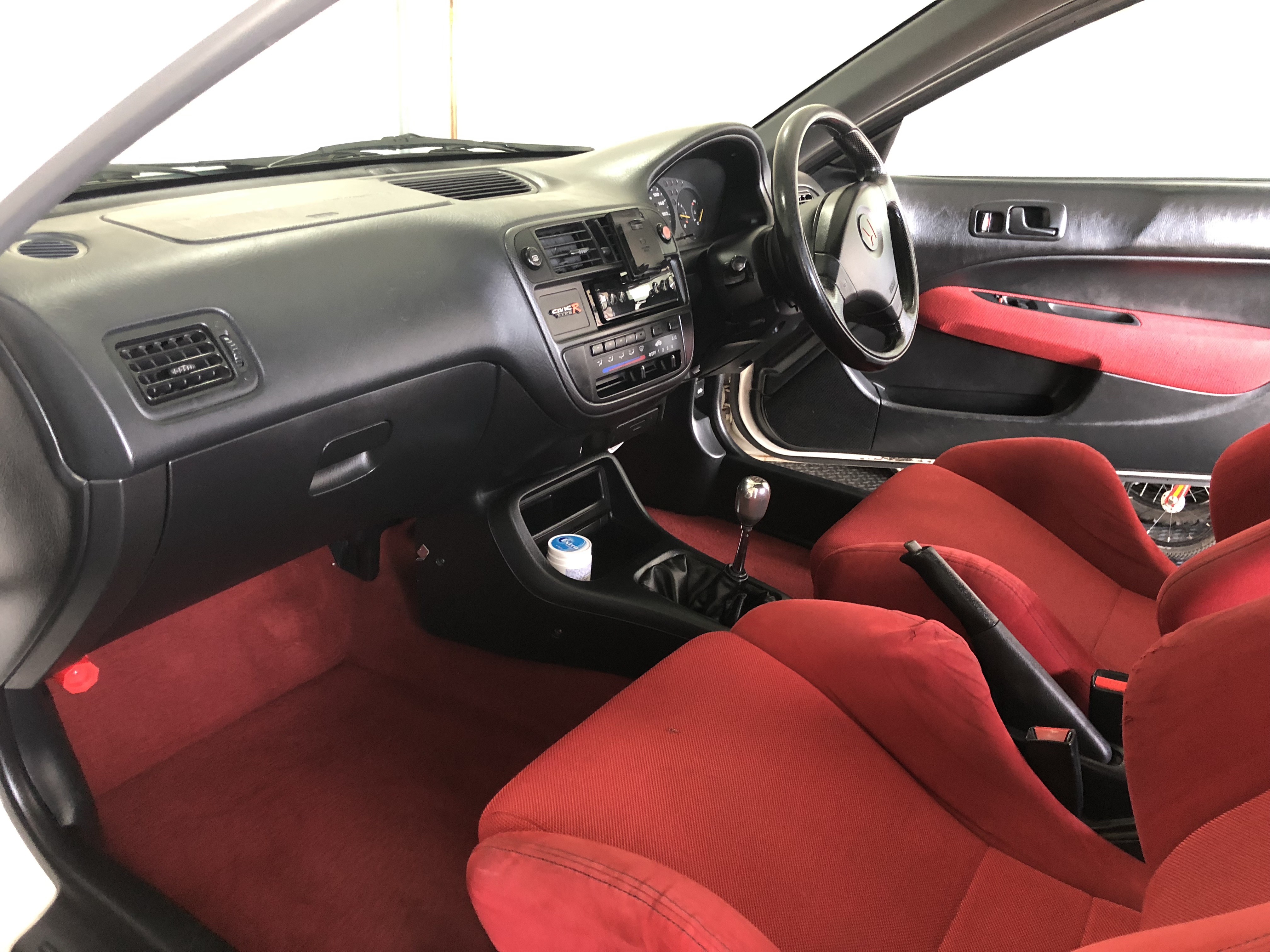 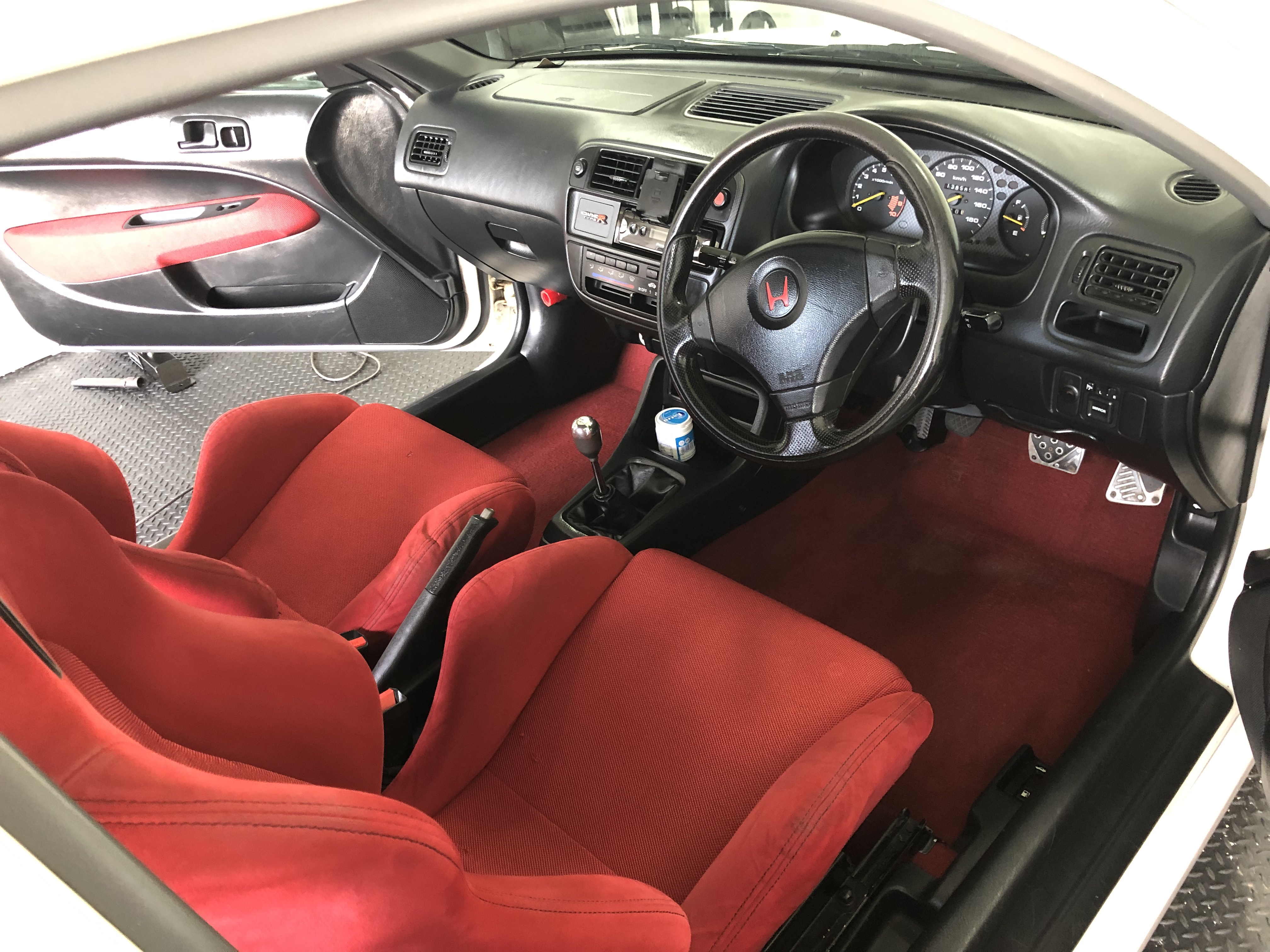 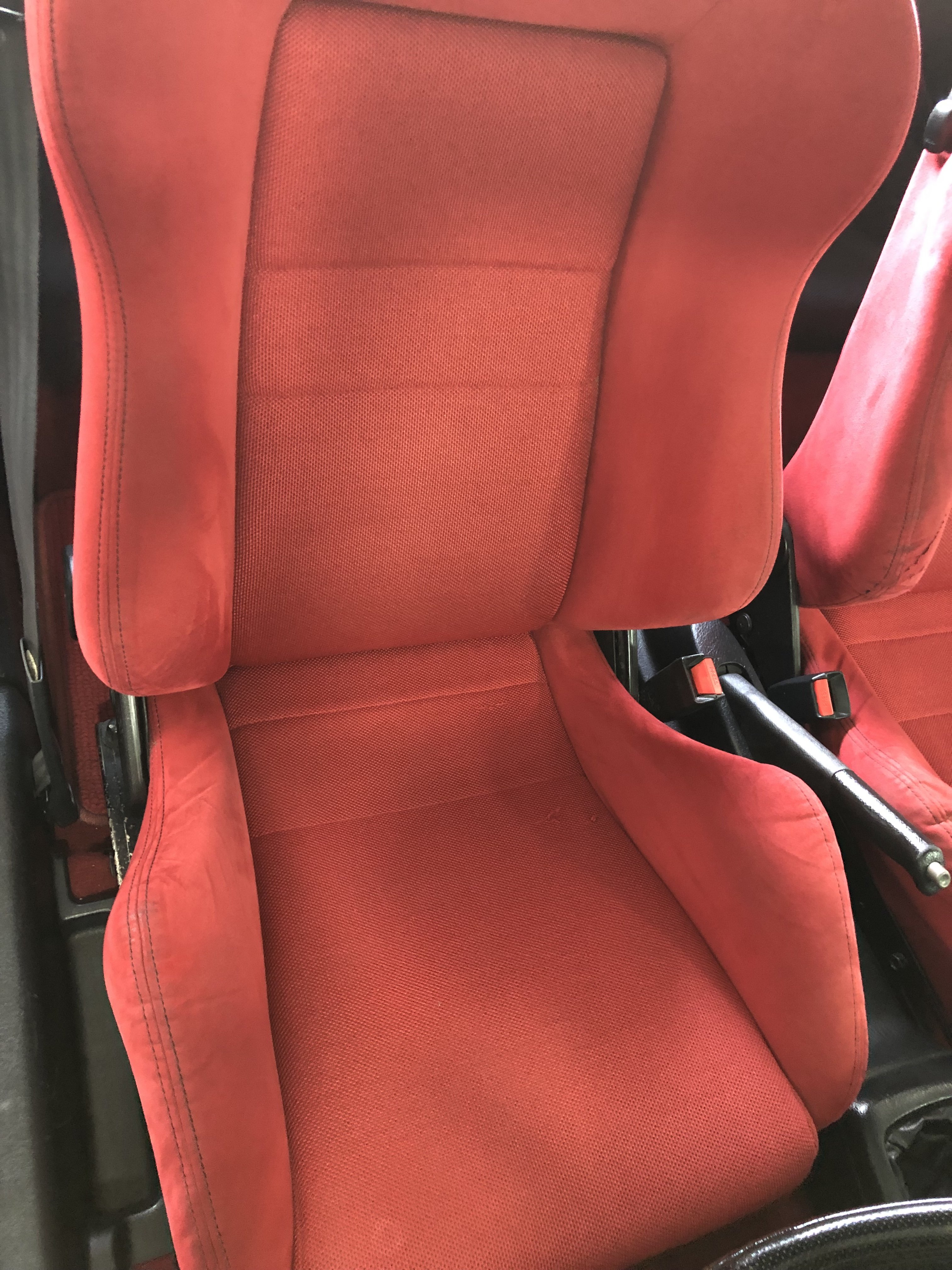 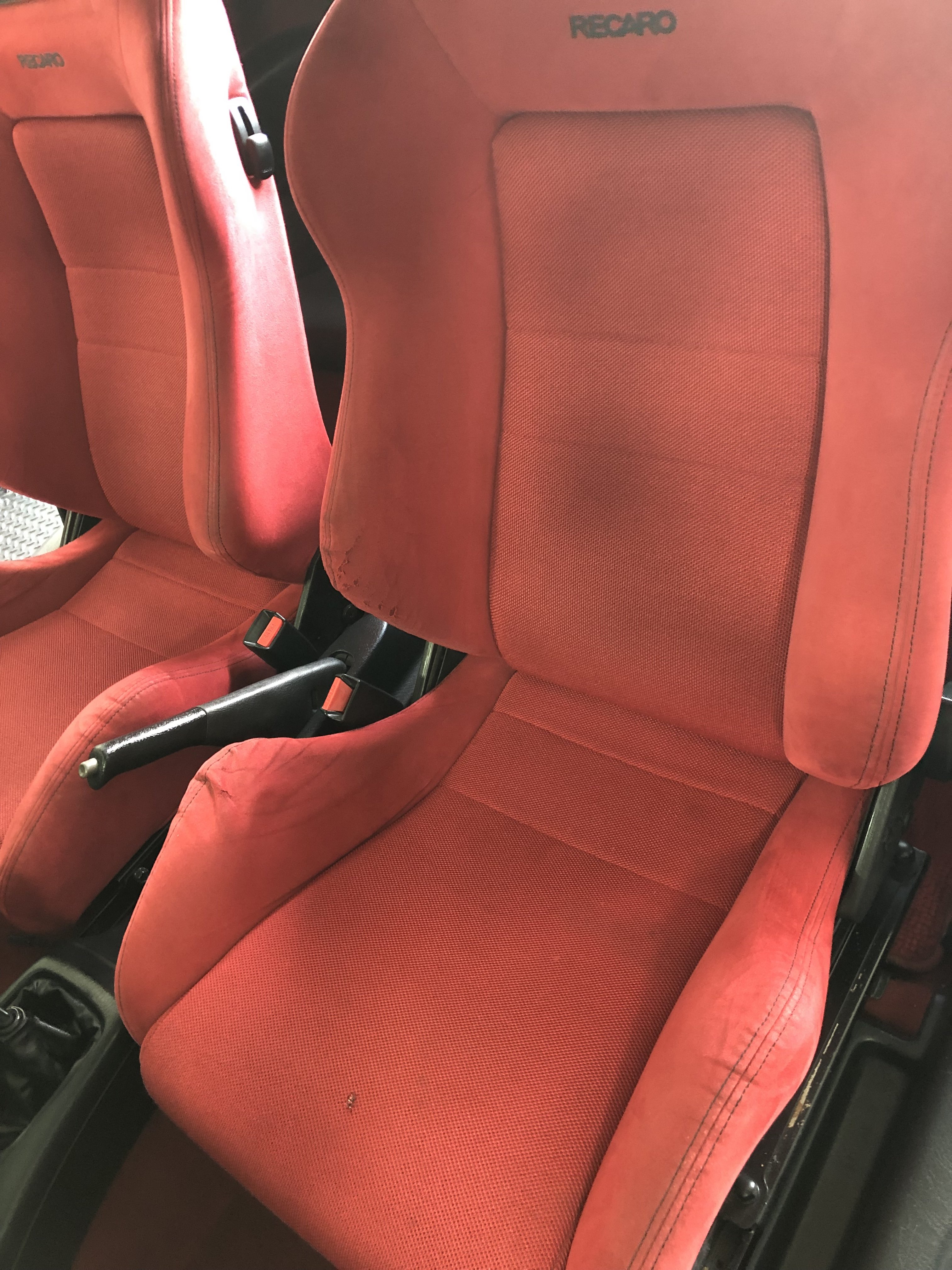 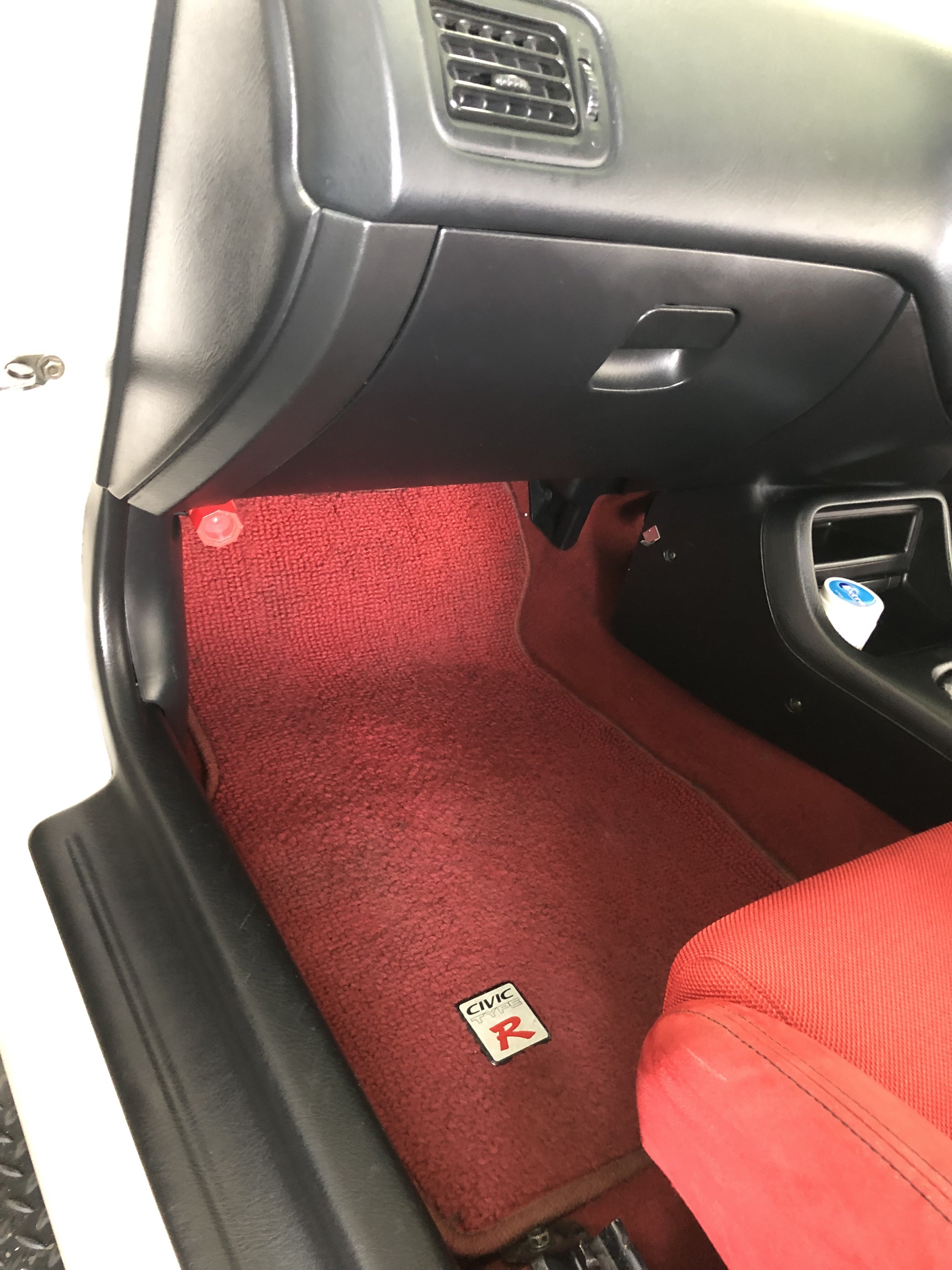 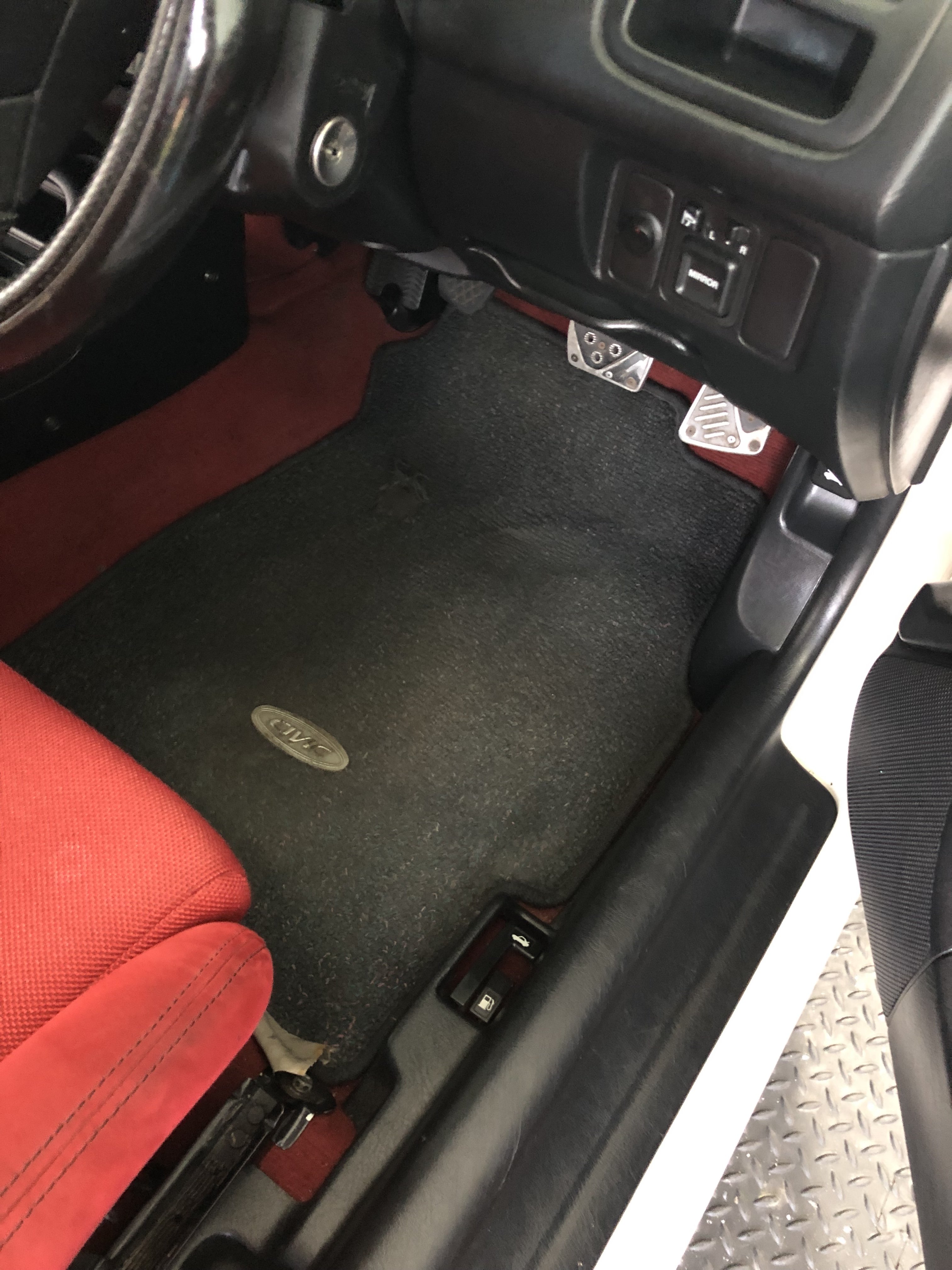 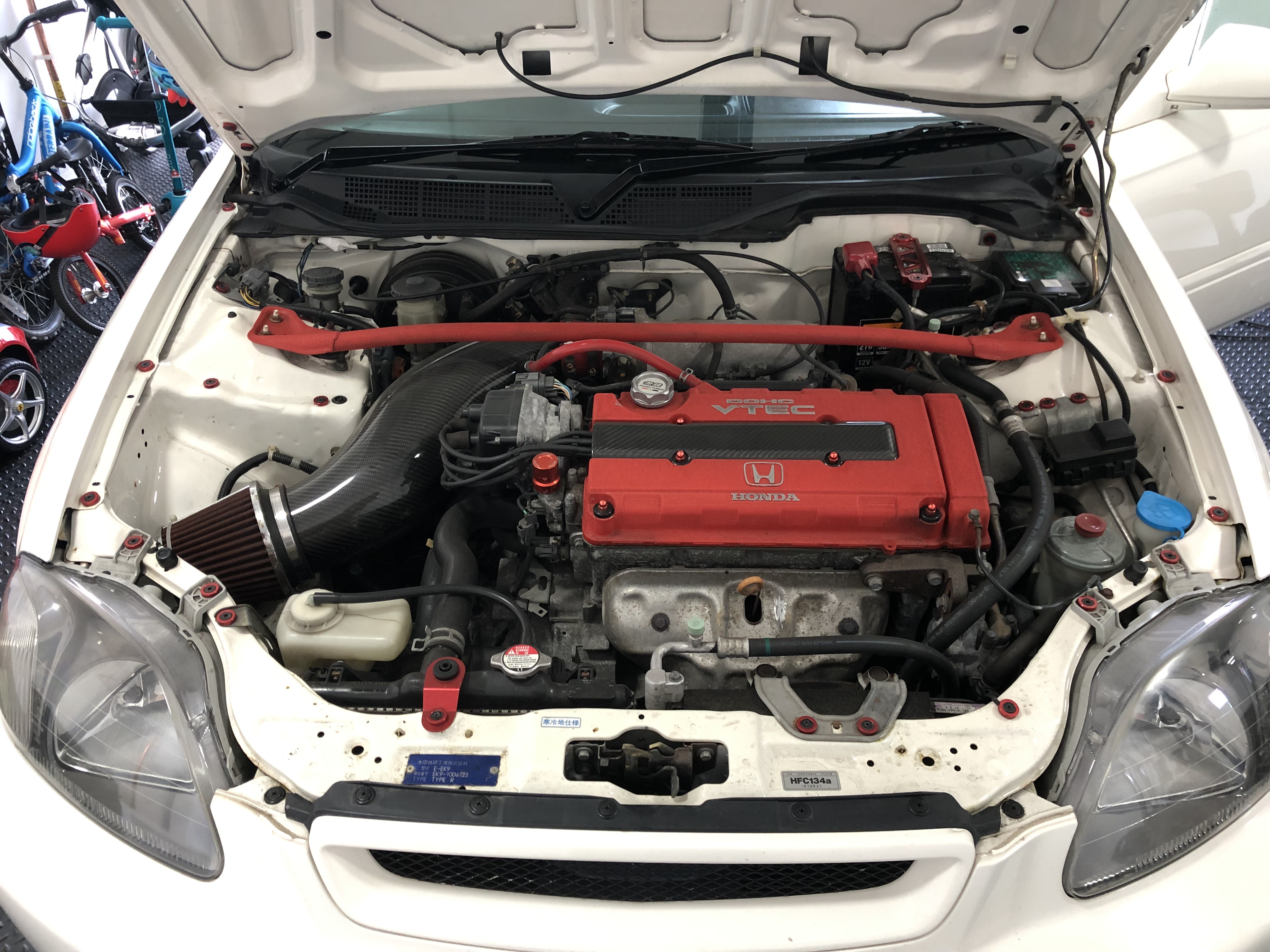 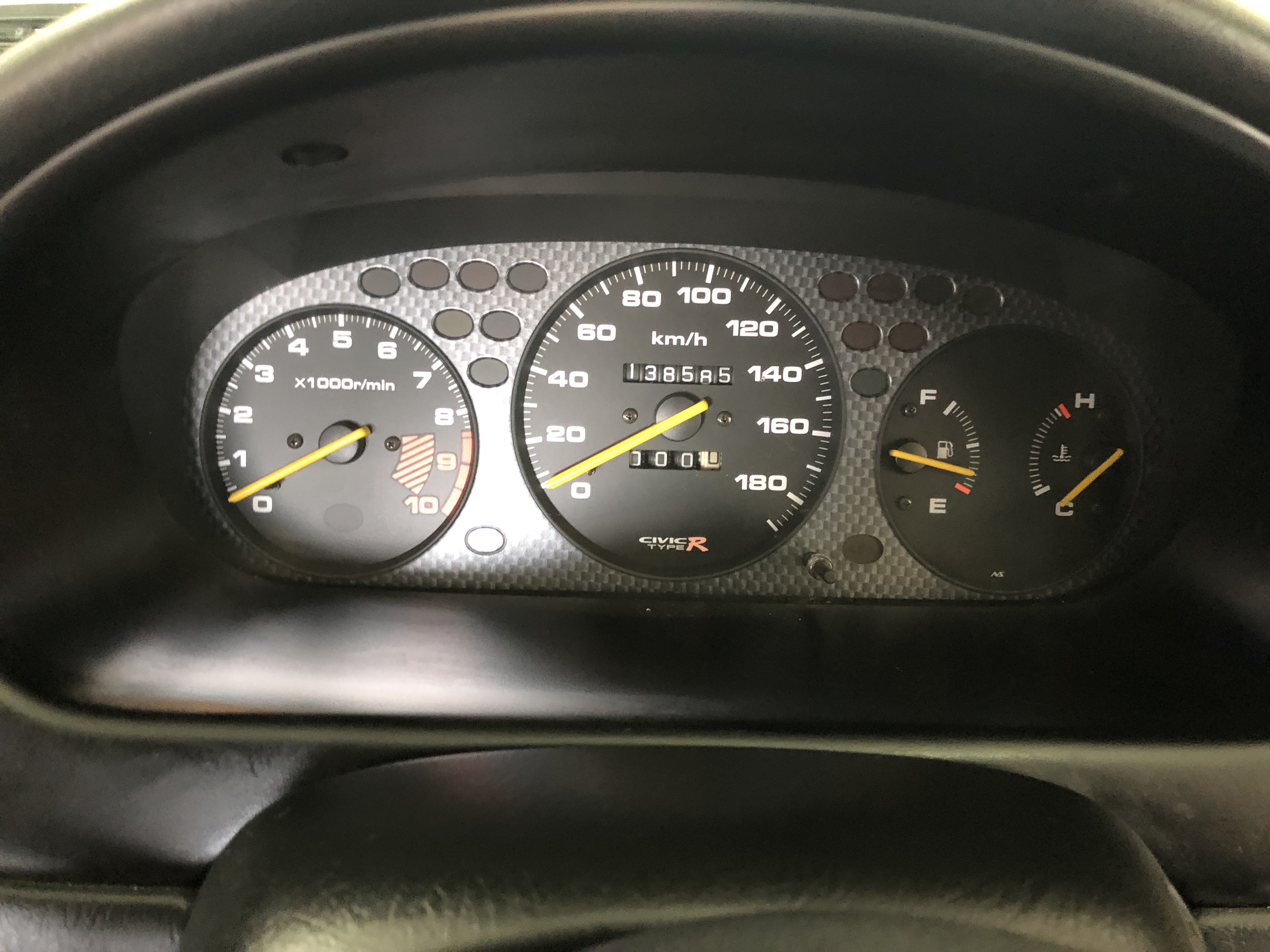